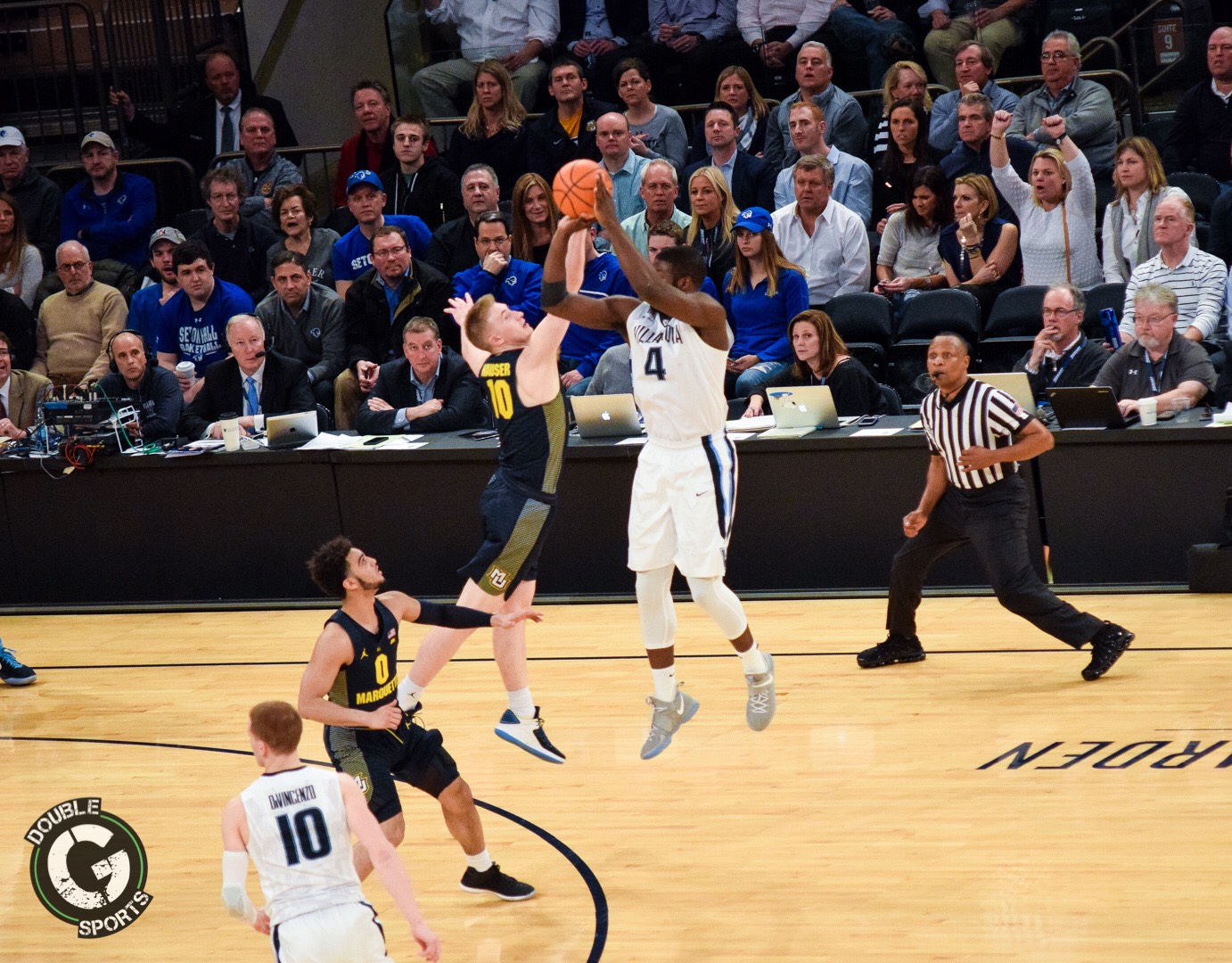 Villanova puts on shooting clinic in 94-70 rout of Marquette

Early on in the Big East Tournament quarterfinal match-up between Villanova and Marquette at Madison Square Garden on Thursday night, both offenses struggled from the perimeter. However, once the three-pointers started raining down, the points came in a flash.

Down 23-20 with less than six minutes remaining, the Wildcats went on an 8-0 run capped off by a four-point play from Mikal Bridges. The Golden Eagles managed to trim the lead down to 33-32 with two minutes left but Villanova regained the upper hand with a 7-2 run taking a 41-34 advantage into the locker room.

Marquette ended up shooting 7 of 13 from downtown, Markus Howard leading the way with 16 points and four treys while Andrew Rowsey tallied 14 points and drilled three trifecta’s. For Villanova, Bridges led the way scoring 16 of his game-high 25 points.

In the second half, the Wildcats led 48-43 when Jalen Brunson (21 points) caught fire scoring five quick points to boost the lead up to digits. Only able to make 4 of 12 three pointer’s in the first half, Villanova was smoking from beyond the arc knocking down 11 of 17 while shooting a blistering 67 percent from the field.

Up 60-49 with 12:30 remaining, the Wildcats buried six straight triples to blow the game wide open. Meanwhile, the Golden Eagles struggled from three-point range hitting only four shots while going 12 of 28 from the perimeter. Howard (23 points) and Rowsey (22 points) were kept in check by a stifling Wildcats defense accounting for a combined total of 15 points. Phil Booth added 15 points for Villanova with Eric Paschall chipping in 13.

“Everything works when you shoot the ball like that, you can run anything offensively,” said Villanova Head Coach Jay Wright. “There was a spurt there when we did break the game wide open, we got a couple of turnovers, couple of stops and got out in transition and scored that was good for us and we haven’t been doing as a much as our normal teams’ do. This is our best offensive team, not matter how good you are offensively you are going to have some nights that you don’t shoot 80 or 90 percent and shoot 50 percent and you have to be able to defend and rebound and keep yourself in the game and give yourself a chance to win the game.”

On Friday night, Villanova takes on Butler in the semifinals with tip-off set for 9:00 p.m. The teams’ split the regular season series with the Bulldogs winning 101-93 back in December and Wildcats victorious 86-75 in February.

“I think every game here means a lot to us,” said Jalen Brunson. “Every game we play like it’s our last. We try not to take things for granted. We just focus on one game at a time. So every game we play is a big game for us no matter whom we’re playing, no matter what the opponent’s record is or anything like that. We just go out there play it like it’s our last. There’s great tradition, great history in this arena. This tournament has a lot of great memories. I mean, it’s always a battle whenever you’re in a game here. So it’s really special to play here.”