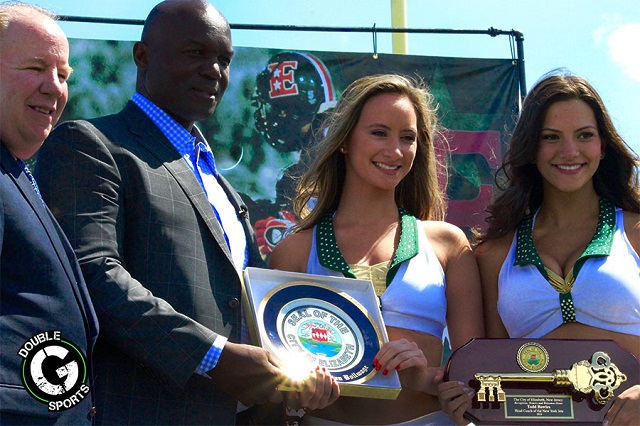 Many friends, family and supporters of the community of Elizabeth, New Jersey came together on Saturday to celebrate the renovation of Waterfront Sport Complex and to re-name the field after head coach of the New York Jets, Todd Bowles.

“[Before the renovation] this was all dirt and grass and weeds and everything else. It wasn’t a place where you could run through freely, so to build this now and have everything set up is outstanding,” Bowles said.

To honor Bowles, a ceremony was held at the Todd Bowles Sports Complex; to recognize the design and completion of the field and it’s facilities.

“For them to do something like this says a lot about the people in the neighborhood,” Bowles said.

The ceremony proceeded with recognition from the Mayor of the town of Elizabeth; J Christian Bollwage, Councilwoman-At-Large; Patricia Perkins-Auguste, Councilman of the First Ward; Carlos Torres; as well as words from Bowles’s wife and his two sons.

“Having a field down here and a place where these guys can go out and play, run free and be safe is nice – very nice,” Bowles said.

As an NFL head coach, Bowles has been preparing for his second year in this position, implementing the things he learned the previous season. As the upcoming season approaches, he looks forward to the NFL draft and moving ahead with his team and new talent.

“You adjust and you go forward and try not go to high or too low, and you just make adjustments as things come to you,” Bowles said.