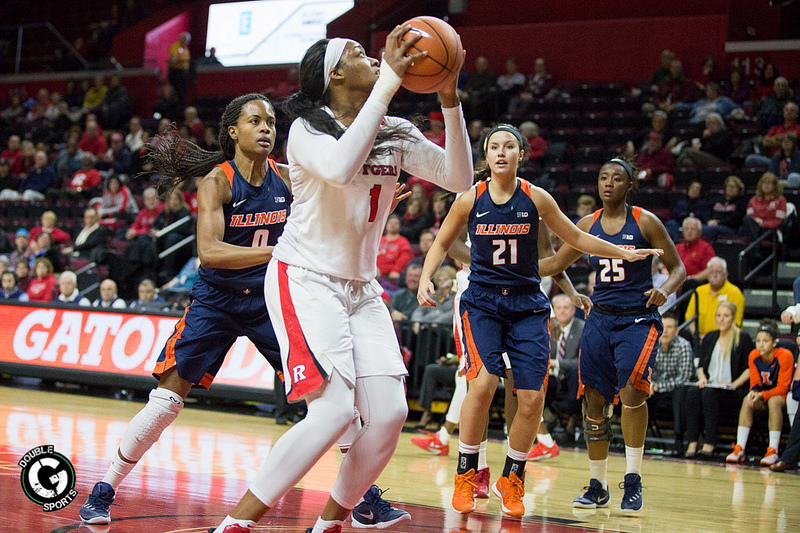 The Scarlet Knights (12-5, 3-2) opened the game with a Victoria Harris layup and never looked back. Rutgers got out to a 20-9 lead after the first quarter and led for the entire game. The game was only tied for 50 seconds at 2-2 in the early going. The closest the Illini (7-9, 0-5) ever got again was nine late in the third quarter. 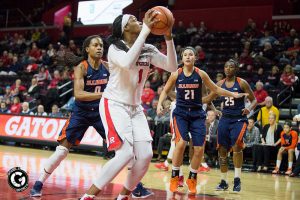 The freshman center Harris earned her first career start and helped fill the void left by fellow center Ariel Butts who missed the game with six points. Senior center Rachel Hollivay filled up the stat sheet with her third career double-double with 14 points, 14 rebounds, one block, one steal, and two assists. Hollivay seemed to play with a purpose and also and in total, the Knights as a team dominated with 34 points in the paint. Rutgers crashed the glass out rebounding Illinois 42-20 as well.

Junior guard Tyler Scaife lit up the scoreboard as well with a game-high and personal season-high 27 points of her own on an astounding 11-of-14 shooting including 2-for-3 from three point land. In the five Big Ten Conference matchups played thus far, Scaife has averaged 22.4 points per game.

“I just think I’ve been in a real good groove lately, and Bri(yona Canty), Kah(leah Copper), Rachel, everybody’s been finding me in my high spots and I’m making my shots,” Scaife told me and other reporters postgame.

The senior forward Copper rounded out the trio of Scarlet Knights in double figures with 15 points and 11 rebounds for her seventh double-double of the season and 12th for her career “On the Banks”. With Hollivay’s and Copper’s double-double’s,  it was the second time two Scarlet Knights had double-double’s in a game this season, with the pair also reaching that achievement in the Big Ten opener against Minnesota on Dec. 31.


And Scaife knows the importance of having teammates getting double-doubles and scoring points as well, which takes some pressure off her shoulders to carry the load in scoring, but also having more opportunities and chances to run.

“They make everything a lot easier,” Scaife said. “They give us a lot of chances for second chance shots, and getting to our fast break offense with them rebounding. It’s pretty special to be playing with people that can average a double-double.”

Copper also moved in to ninth place on the all-time scoring leaders list surpassing Epiphanny Prince. She now has 1,564 career points and needs 59 points to move into eighth all-time past Matee Ajavon.”

“It’s awesome,” Copper said regarding the accomplishment of moving up the charts. “Piph is a great player, and I didn’t know about (passing her), it’s interesting,” Copper told me.

Cynthia Hernandez, the team’s three-point specialist who is shooting 37.1 percent from behind arc, was seen with a walking boot and crutches and is out indefinitely with a foot injury.

Rutgers hits the road the next two games where they are 1-4 so far playing on enemy courts. The Scarlet Knights travel to Nebraska this Saturday for a 6:30 p.m. tip and Michigan State next Tuesday for a 6:00 p.m. start. Both games will air on BTN.