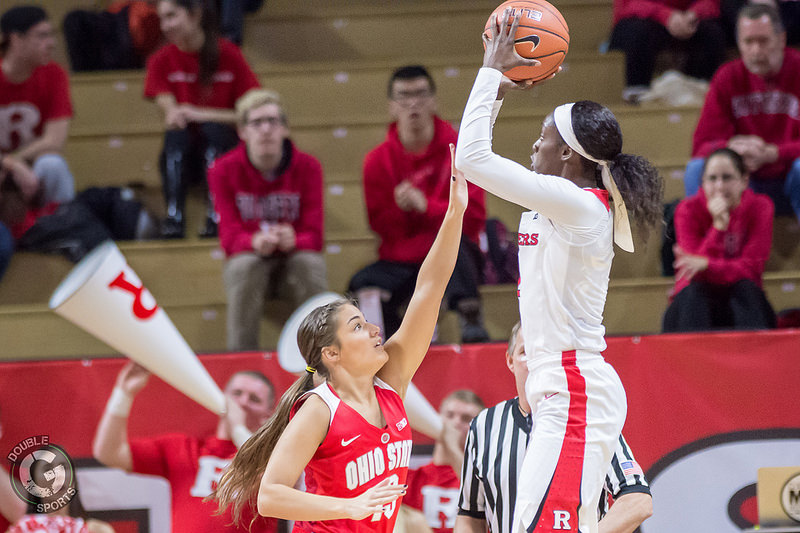 WBB: Rutgers Falls to No. 7 Ohio State at the RAC

PISCATAWAY, N.J. – The Rutgers fans who cleaned off their cars and shoveled two-feet of snow thanks to Friday/Saturday’s snowstorm and drove to the RAC to see the women’s basketball team, were hoping for an upset over No. 7 Ohio State. It seemed plausible in the first half after the two teams traded baskets and were tied at 30 apiece at halftime, but Ohio State escaped with a 67-58 win.

The Buckeyes used a monster 24-7 third quarter and continued their full-court pressure that caused the Scarlet Knights into turnovers for the victory.

Rutgers came out of the locker room in the third quarter ice cold, missing their first seven shots from the floor. Five quick points near the end of the third propelled a more offensive outburst in the fourth.

The Scarlet Knights opened the final frame 6-for-9 from the floor including two three pointers (one each by guards Briyona Canty and Shrita Parker), and outscored the Buckeyes 21-13 in the quarter, but it was a little too little too late for Stringer’s squad.

Rutgers forward Kahleah Copper finished with 18 points on 8-for-13 shooting (61 percent) and 13 rebounds for her eighth double-double of the season and 13th of her career “On the Banks”.

Parker finished second behind Copper in scoring with 13 points with 12 of them coming on four three pointers on seven attempts and a free throw.

Ohio State came in averaging 89 points per game in Big Ten play and were held way below their average, but outrebounded (33-24) and outscored Rutgers in the paint (32-22).

The Buckeyes were led by Kelsey Mitchell with 22 points on 8-for-15 shooting including 4-for-9 from three point land. Mitchell leads the Big Ten in scoring with 25.2 points per game.

Mitchell was held in check early on due to a zone said Rutgers guard Tyler Scaife postgame, but they switched to a man-to-man that allowed the Buckeyes to drive to the hoop, score, and gain confidence. Stringer said she might have called off the zone too early and she takes “responsibility” for doing so.

“I should have kept them there because we’re not a man-to-man team,” she said. “We really can’t play man-to-man. It exposes us to too many bad things. But I switched it (out of a zone) and it was not a good idea, period.”

Rutgers relies on tough defense (second in the conference 56.3 points per game given up just behind Maryland at 56.2) to win them games as they have struggled to score (conference worst 61.6). If Rutgers wants to make the NCAA Tournament come March, they must get flow in their offense and find a consistence third scorer behind Copper (16.6 points per game) and Scaife (17.5). They also need night-in-and-night-out production from center Rachel Hollivay. They can’t afford a two point and two rebound game like she had today. They need more offense out of her to go along with her defensive presence in the paint.

With their third-straight loss, Rutgers snapped their eight-game home winning streak to drop to 12-8 overall, 3-5 in the conference, and 8-2 at home. Ohio State improves to 15-4 overall and 7-1 in the Big Ten.

Rutgers next travels to Bloomington, Ind. for a 7 p.m. tipoff against Indiana on Wednesday. So far this season, Rutgers has struggled away from the RAC where they are 1-6, including dropping their last six. Their only victory away from Piscataway is the opening contest against Saint Joseph’s in Philadelphia, Pa. way back on Nov. 13.