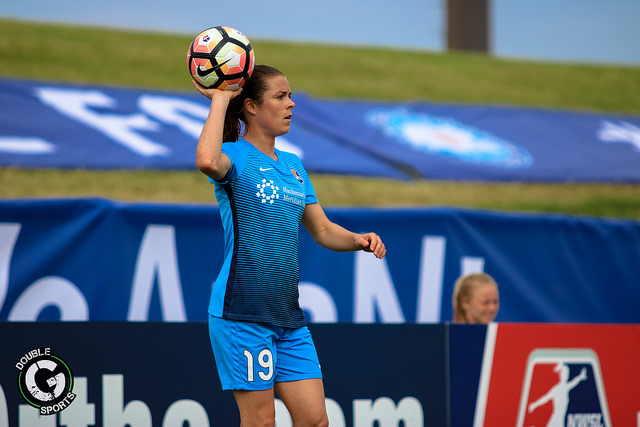 Last Saturday, Sky Blue FC gave their fans something to celebrate by defeating the Houston Dash 2-1 at Yurcak Field. It was the second consecutive win against the Dash, only one week apart.

Today (Wednesday), Sky Blue is looking to rack up three more points against the NC Courage, making it nine points in their last three games. Winning will allow SBFC to continue their streak and take first place in the general NWSL standings.

What to Expect Today

Winning could be on the horizon for SBFC, but is not going to be as easy as it sounds. The NC Courage team is coming from suffering a big loss this past Saturday against the Chicago Red Stars, falling 3-1. They are going to be playing at their home field in Cary, North Carolina, and will have the majority of the crowd in their favor.

On the other hand, we are expecting a stronger and more confident Sky Blue FC team on the field. To win, SBFC needs to be able to focus defensively and not let the 50/50 balls get on their opponent’s feet. Christie Pearce has been a pillar in the back, and will need Erin Simon, Mandy Freeman, and Erica Skroski in sync. Fast passes and quick moves, and we will definitely be seeing some jumping celebrations for Sky Blue FC.

We may be seeing a similar formation as last Saturday’s game against Houston Dash, with a small variant in the midfield, starting Leah Galton instead of Taylor Lytle.

Kickoff for the match is 7:30 p.m. ET at WakeMed Soccer Park in Cary, NC. You can also watch the game live on NWSLsoccer.com, Go90.com or on the Go90 app.