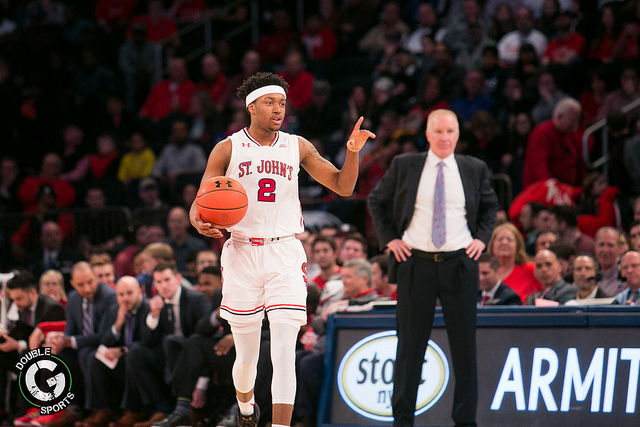 It seems like a lifetime ago that the St. John’s Red Storm basketball competed not only for the best team in the Big East, but also in the country. Back when the conference first emerged, the great Lou Carnesecca led legendary rosters to battle against rivals like Syracuse, Georgetown and UCONN, all with hopes to win the Big East and go deep in the NCAA tournament.
Unfortunately, circumstances have changed drastically for the Red Storm over the years. Between the Big East continually expanding along with the inability to find a consistent coaching staff, St John’s has had great difficulty keeping any top NYC recruits at home. And, most importantly, they have faced these issues all while looking up from the bottom of a superior 14 team conference.
And yet, by 2013, the disbanding of the Big East (due to low football ratings, nonetheless), seemed to provide a light at the end of a very long, disappointing tunnel. This shake up not only put the Red Storm in an interesting position, but also other Big East perennial doormats such as Seton Hall and Providence, who now have the chance be the big fish in a small pond. And as sad is it was to see the big dogs leave, it was essentially this spark that turned a new leaf for the Red Storm.
Only a few years later, St. John’s basketball made what I feel could be one of their best hires ever. Bringing in alumni and NBA Hall of Famer Chris Mullin as head coach, the choice more importantly reignited a winning culture that once reigned supreme. Mullin has wasted no time fanning the flames with big victories over Syracuse, Butler and Seton Hall this past season. And while St. John’s may not be legit yet – Where there is smoke, there is usually fire.
The early stages of off season recruiting have continued to drive momentum in the right direction, with the most recent push being the signing of five star recruit Sidney Wilson. The 6 foot 7, athletic wing will pose a new look offensively, and goes right along with Coach Chris Mullin’s vision for the program. As he quotes, “Our vision for the future success of this program relies heavily on keeping top local talent at home. The addition of Sidney Wilson to our roster for the upcoming season bodes well not only for the future of St. John’s, but also for basketball as a whole in this city.”
On top of the buzz, St John’s will also be partaking in the “Basketball Hall of Fame Holiday Showcase” at Mohegan Sun Arena in 2017. Competing in one of the top holiday tournaments on the East Coast should allow the Red Storm one final tune up before conference play, where they will look to at least split games with conference leaders Villanova, Butler and Xavier this year.
All seems to be moving in the right direction for St. John’s, and I think this should come as no surprise. I always agreed with the statement in basketball “Do not change who you are.” St. John’s was one of the founding fathers of the greatest conference in college basketball because of their toughness and physicality. And top players wanted to play in the Big East for that exact reason. They knew every game would require you to bring your hard hat and lunch pale, and if you came out soft, you’re getting punched in the mouth first.
Chris Mullin was one of the legends of this era as a player and scrappy kid from Brooklyn. Now as a coach, he’s been the instrumental piece to getting this program’s mojo back, all while recruiting and playing the game the right way.
Post Views: 4,206
The following two tabs change content below.