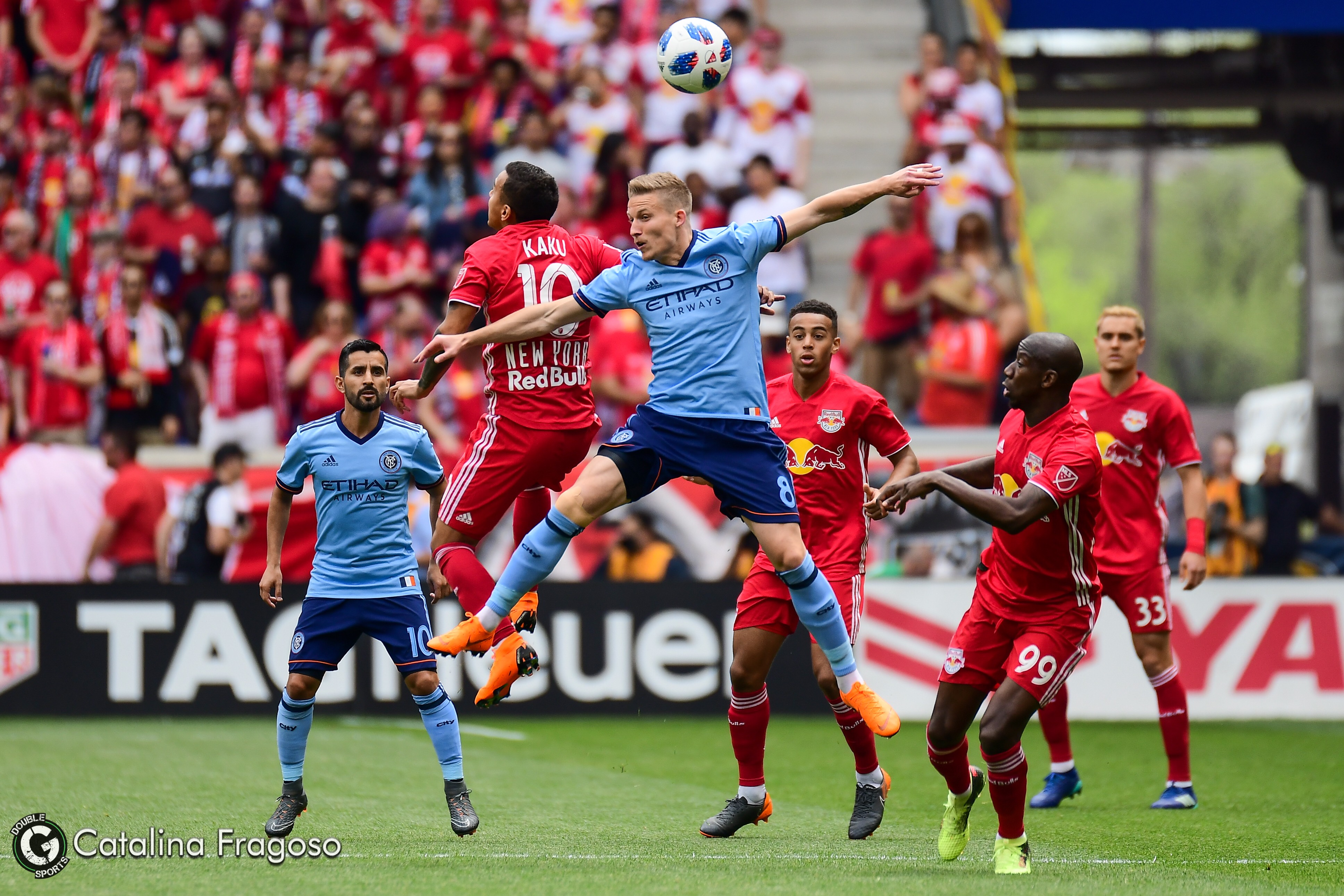 On a hot and sunny Cinco de Mayo, the New York Red Bulls produced their best performance of the season so far. Who are the winners and losers from this New York Derby?

This man has truly arrived.

Following his game-winner against the LA Galaxy last week, he ran the show in Harrison producing a Man-of-the-Match display. It only took the Red Bulls’ number 10 just two minutes to open the scoring, burying a rebound to make 1-0.

The Argentinian would then lay a gorgeous through ball onto the path of Florian Valot, who’d double the hosts lead off a deflection in just the fourth minute of play. But he wasn’t done there, delivering a delicious cross on for Bradley Wright-Phillips to easily head the Red Bulls into a comfortable 3-0 lead.

It took a while for the 23-year-old to find his way into the starting lineup, but now he’s one of the first names on the team-sheet every week. Kaku is now tied for the league lead with six assists, while also bagging three goals in eight games so far this season. A goal and two assists on his derby debut, he is getting better and better with each game, proving to be a key player and a fantastic acquisition.

Two Nines has done it to City again.

Make it 11 goals in 10 games against City, he’s been a nightmare to play against. He’ll feel he should’ve bagged a brace or even a hat-trick, but he missed two glorious chances. The first being in the opening minute which ended up being Kaku’s goal, and the second was a one-on-one against Sean Johnson, only for the latter to make a nice save.

All that being said, he was great in linking up play and being a handful for opposing defenders. He’s currently tied for the league lead with six goals, not surprising considering how prolific he’s been over the years. Wright-Phillips is still doing the business at 33-years-old, scaring the daylights out of his opponents.

Nearly a year ago, he saw his team get dominated by NY City in a 2-0 loss at Red Bull Arena. Now, his gameplan of starting fast and getting on the front foot paid off tremendously.

Marsch ditched using three center-backs and opted for the more-efficient four at the back, a 4-2-3-1 formation. Not only that, but he went with an unchanged lineup, looks as though he’s even found his best eleven which is always a good sign. He’s had his critics and may continue to do so, but Marsch is one of the best coaches in MLS and has now got his team firing, winning three of its last four games.

There are times where he’s too cautious playing five-at-the-back, but you’ve got to give him credit, he got it spot-on against City.

Make no mistake about it, this has become of the best rivalries in MLS today.

While this game was far from a classic, it was a fantastic advert for a league scrutinized for having players at the end of their careers. And though it’s not the league’s fault, it’s still there and may continue to be there but the rivalries will be there too, like the New York Derby.

Two sets of fans whose battles wage from social media to chants against each other at the stadium. Players young and veteran who realize the significance of this game, it’s rising magnitude and high stakes. And this is just the 10th time these two have played, where the question is simply – Is New York Red or Blue?

The Red Bulls and City don’t play each other in the league until July, a long time from now. There’s still a ways to go for this battle of New York to get bigger, they’ve yet to meet in the playoffs. That’ll be something to behold, but for now the games these two clubs have played are already etched in MLS history. Major League Soccer has been blessed with a great rivalry.

Whatever his plan was, it did not work out at all.

Using a 4-3-3 formation, Vieira felt that possession was going to be the key to beating the Red Bulls. And yes, his team had the majority of ball control, but they mustered little-to-nothing on offense and had to watch his team fall into an embarrassing 4-0 defeat.

It was simply a bad day at the office, and after a brilliant start to the league, going unbeaten in their first seven games, City have now lost two of their last three. This team is still stacked on paper and are still one of the best in the East, but this game served as a reality check for Vieira and his men.

He was out coached, and now needs to go back to the drawing board to get his team going again. The team is slipping and could lose ground quickly if things don’t change. At least he’ll be kept busy and not have to worry about whether or not he’ll replace Arsene Wenger.

In a word, Villa was ineffective.

The 34-year-old couldn’t get past the bruising duo of Aaron Long and Tim Parker, and was mainly left out on his own without the ball having to make runs in order to create offense. The problem with that was, City didn’t create much even with him.

He was substituted after 66 minutes, after not attempting a shot all game. It was a performance to forget for Villa, a week after scoring his 400th and 401st career goals.

You can bet he’ll be scoring goals again, but for now Villa has to figure out how to get involved in the game more, whether it’s by forcing the issue or getting others involved.