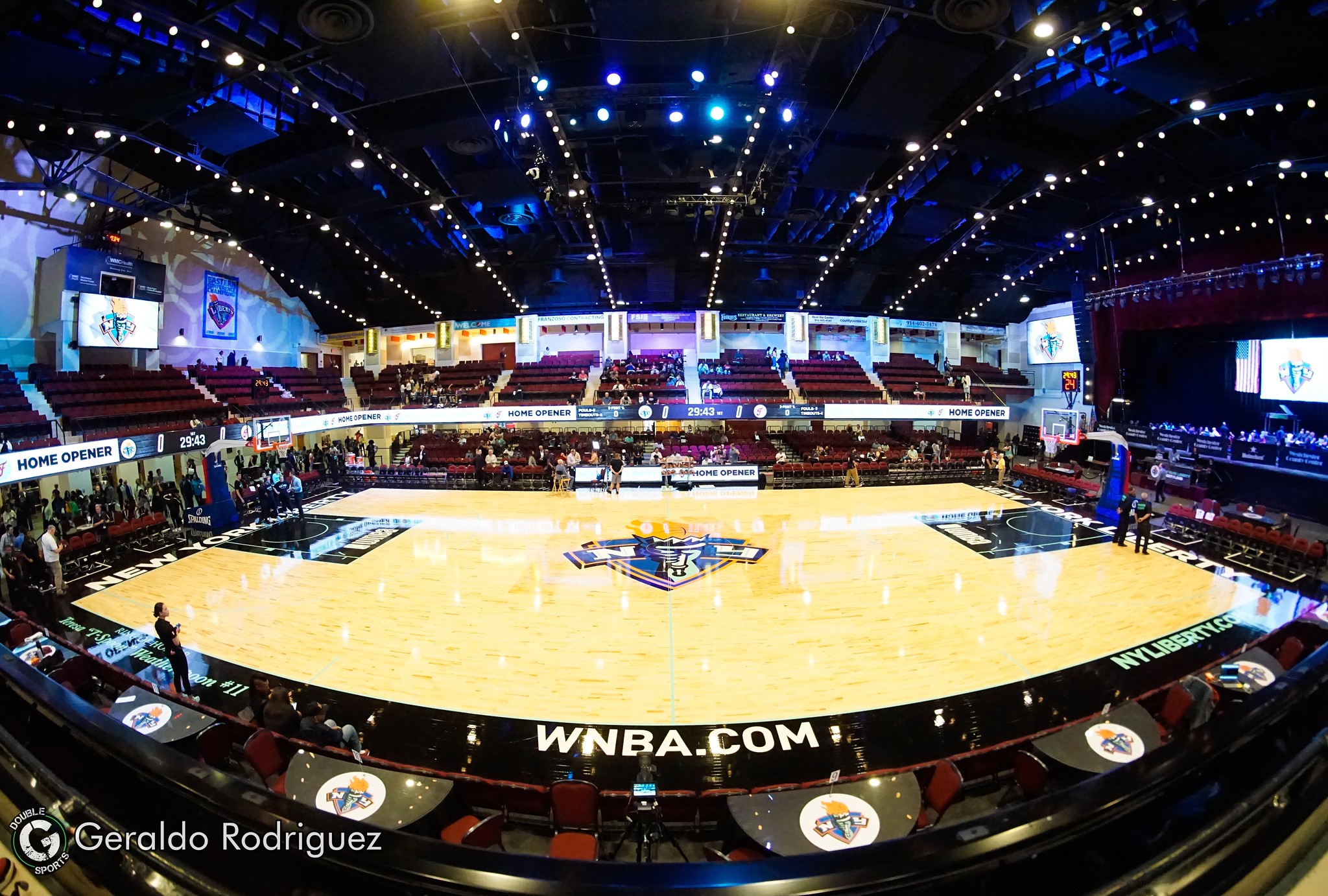 ESPN has named April 17 “WNBA Night” and will follow the draft with a replay of the 2019 Game 5 Finals.

The early entries have been confirmed and the New York Liberty are now on the clock.

Since the latest mock draft, only Texas A&M’s Chennedy Carter announced her entry into the 2020 WNBA draft. The league’s deadline for any early entries to declare was April 7, ten days before the draft. Other potential early entries were Louisville’s Dana Evans, Arizona’s Aari McDonald & Rutgers’ Arella Guirantes.

ESPN is set to televise the draft on April 17 at 7 pm EST.

ESPN has named April 17 “WNBA Night” and will follow the draft with a replay of the 2019 Game 5 Finals between the Washington Mystics and Connecticut Sun. The draft is also being held “virtually” with league commissioner Cathy Engelbert announcing the picks from a to be announced location. Certain picks will then be interviewed remotely. The move comes as the world is still dealing with the Coronavirus pandemic.

The Sky look to already boost their roster and extend their bench by adding Cooper. Cooper being capable of both guard spots gives Chicago a high volume scorer and a reliable ball-handler. Despite an already roster that’s ten deep, adding Cooper can give the Sky a solid bench player and develop behind Vandersloot & Quigley.

The Wings’ fourth pick seems destined as trade bait. The Wings’ already have 14 players on their roster, and adding four first-round picks into their training camp isn’t an option(teams can have 15 players maximum once camps open). Alarie is the best available player here at the 9th pick. Alarie’s stock got hurt with the cancellation of the NCAA tournament and might have gone higher. An all-around scorer with incredible basketball IQ, Alarie’s likely a sought-after pick possibly heading to one of the three teams without a first-round pick(Connecticut, Las Vegas or Los Angeles).

Gillespie’s stock continued to soar during the 2019-2020 season. She’s a big that’s capable of running the floor and also an asset to crash the boards. Gillespie averaged a near double-double her senior year and would fill the void with Bonner now in Connecticut.

The Storm’s pick here remains the same from the first mock draft. I don’t see Dangerfield being picked by the Wings unless they need her as part of a trade package. For the Storm, they are in a situation to already be 10 deep, so their pick here is likely someone to develop for the future. Sue Bird will be 39 entering the 2020 season and, even with Jordin Canada as her back-up, Bird missing the 2019 season gives them a need at point guard. Dangerfield is the best remaining point guard and can be developed under Bird. Dangerfield’s height can’t be ignored, but she has abilities similar to former Storm player, Temeka Johnson.

Willoughby is a solid, all-around player who can score from any spot on the floor and fits nicely into the Mystics’ rotation. Willoughby’s stock continued to rise throughout the 2019-2020 season and slides into the first-round due to several potential early entries opting to return to school. The Virginia star will need to improve on her defense at the next level to see significant minutes off the bench.

13. New York Liberty – Beatrice Mompremier, 6’4″ F/C, Miami
The Liberty’s weakness now is clearly in the post after landing Ionescu at #1. Having Mompremier fall out of the first-round is a huge gift for New York. Mompremier only played in 17 games for Miami due to injuries, but managed to average a near double-double. If healthy, she should be a solid player inside for New York’s bench.

Yep, another pick for Dallas. This pick will likely get paired up with their #9 pick for a trade. The likelihood of the pick sticking on an already jumbled roster would otherwise seem like a wasted pick otherwise. Dallas takes the best available player here in Pivec, who’s high-efficiency shooting(50%) will make her a valuable trade asset.

The Lynx could have opted to take a PG at #6, but the option to pick up Walker there was too good. In a draft overloaded in guards, the Lynx are fortunate to get Rider’s Stella Johnson to fall here. Johnson is a high-scoring PG and a strong defender. The first mid-major pick in this draft essentially. The lack of an NCAA tournament hurt her draft stock, but should still make a solid rotation player for the Lynx.

Martin was eligible to enter the 2019 draft early but opted to return to West Virginia in hopes to improve her draft stock for 2020. Legal issues before the season and a less-than-stellar senior year has her dropping into the second round. A fit for Atlanta to fill a hole now that Angel McCoughtry signed with Las Vegas. If Martin can find her shot again and work on her defense, she should be able to land a spot on the Dream’s roster.

The Mercury’s remaining need is a PG and Doyle is the best available at this point. A solid ball-handler with a strong defensive game who fits into the Mercury’s rotation. Doyle will have to improve on her shooting at the next level to see significant minutes, especially from behind the arc.

Harrigan will have some tough competition in Seattle to crack a spot on their roster. By taking “Kiki” here, Seattle adds a pure shooter to their team after trading Mosqueda-Lewis in the offseason. Harrigan’s will have to improve on her rebounding and her turnovers to make it on their Storm’s final roster.

This is the Sparks’ first pick in the 2020 draft. Even with an already loaded roster, picking the best available with Samuels is an easy choice. An all-around solid player with a strong ability to drive to the basket. Samuels’ will need to cut down on her turnovers and improve her outside shooting to land on the Sparks’ roster.

With another pick, the Wings take a pick for the future in Germany’s Geiselsoder. A teammate of Sabally on the national team, locking in her rights will retain her with Dallas for the potential future. A solid big for the Wings to develop down the road.

The Sparks, after taking Samuels two spots ahead, go with a big here with Scheid. Northwestern were the surprise team of the 2019-2020 NCAA season, and they were led by Scheid. A 6’2″ post who led the NCAA in three-point shooting, Scheid will need to be more aggressive inside and improve her rebounding to land a spot with the Sparks.

Odom was a bit underutilized at Duke. Does she play inside or is she more of a wing? She has a strong drive to the basket but lacks a three-point shot and has a high turnover margin. Perhaps landing with the Sun, Odom can be mentored under Alyssa Thomas in the same way.

Brewer could end up going higher, but so many teams are set in the post it’s no surprise if she drops down this far. The Mystics get a solid, true center on their roster and could ease the burden off of Sanders inside. Brewer averaged a double-double her senior year and is a solid inside presence and one of the best rebounders in the draft. Her high turnovers will be something to watch at the next level.

To view the remainder of my 2020 WNBA Mock Draft, head to Draftsite.com. Todd Roman is the mock draft contributor for Draftsite and the full, three-round mock can be seen at https://www.draftsite.com/wnba/mock-draft/2020/ Draftsite also gives fans the ability to create their own mocks. Once all the early entries are now, check both doublegsports.com & draftsite.com for any news and an updated mock before the draft on April 17.

Baseline Jumper, Episode 118: What to Make of the 2020 NBA Season (Audio)
The Covid Corner – 2nd Edition