While attending Rutgers University, Megan Ciampo interned at Eyewitness News in New York City. In addition taking news writing classes, Ciampo thought she would eventually work for a news station and enjoyed her internship experience but the feeling of spending eight hours in a newsroom and hearing negative news affected her attitude.

“I played soccer in high school, got hurt and couldn’t play in college,” said Ciampo. “Sports are huge at Rutgers and I was at baseball, basketball and football games all the time but didn’t plan on going into sports when I graduated. I knew it was an option, majored in communication and minored in digital media information.”

Catching a major break with Ciampo’s family being friends with Rockland Boulders Team President/GM/Managing Partner Shawn Reilly for a long time, Reilly asked Ciampo about her plans after graduating from Rutgers. With Ciampo unsure of her plans, Reilly offered the position of front desk since the current employee was leaving for another job.

“I graduated on Sunday, started on Monday and Opening Day was Tuesday,” Ciampo said. “Definitely a good time to get involved because interns come in right after school. The front desk was not my favorite job but looking back, a great tool and connected with so many people. I was the first person people would see when they would walk in and built connections with.”

Building off her experience at the front desk, Ciampo moved to Box Office Manager where she worked with fans who she had dealt with as the front desk person and in charge of their tickets. “It was easy for me to talk to them about it and know their back story and it was just not coming in blind and not knowing who you are dealing with,” said Ciampo. “The fans we still have here coming in and stopped in when I became the box office manager and timing wise worked out perfect.”

Next up for Ciampo, the role as Digital Media Manager. “A huge part of what we do here, game broadcasts, what we do during games and post-game interviews. Having that connection between all three roles has groomed it to where it is today and definitely helpful. To be able to take my communications degree and what I learned in school and put it into sports. We have fans that come in to have a good time and it’s a win and makes those 16 hour day we are pushing day after day worth it.”

However, the real crowning moment occurred this past off-season when Reilly offered Ciampo the Assistant General Manager position of the Rockland Boulders.

“It’s pretty cool, my first day out of college, I started here, didn’t know what to expect and kind of worked my way up,” Ciampo said. “I wasn’t expecting it when my boss presented it to me and seemed like the next step. Minor League baseball is a great place to get these stepping stones and able to makes these moves in an organization at the age of 24 is crazy.”

“Been kind of mind-blowing and still figuring it out. Shawn Reilly is involved in the day-to-day and what goes on here. I hear from people who say their bosses are not around, but I can call him at any hour of the day with an idea or question and he’s the first one to give his input on it. Our departments are intertwined all day long, I can sit in a meeting at 9 a.m. with promotions, 11 a.m. with the sales team and Shawn (Reilly) at 2 p.m. My day is always filled with everybody.” 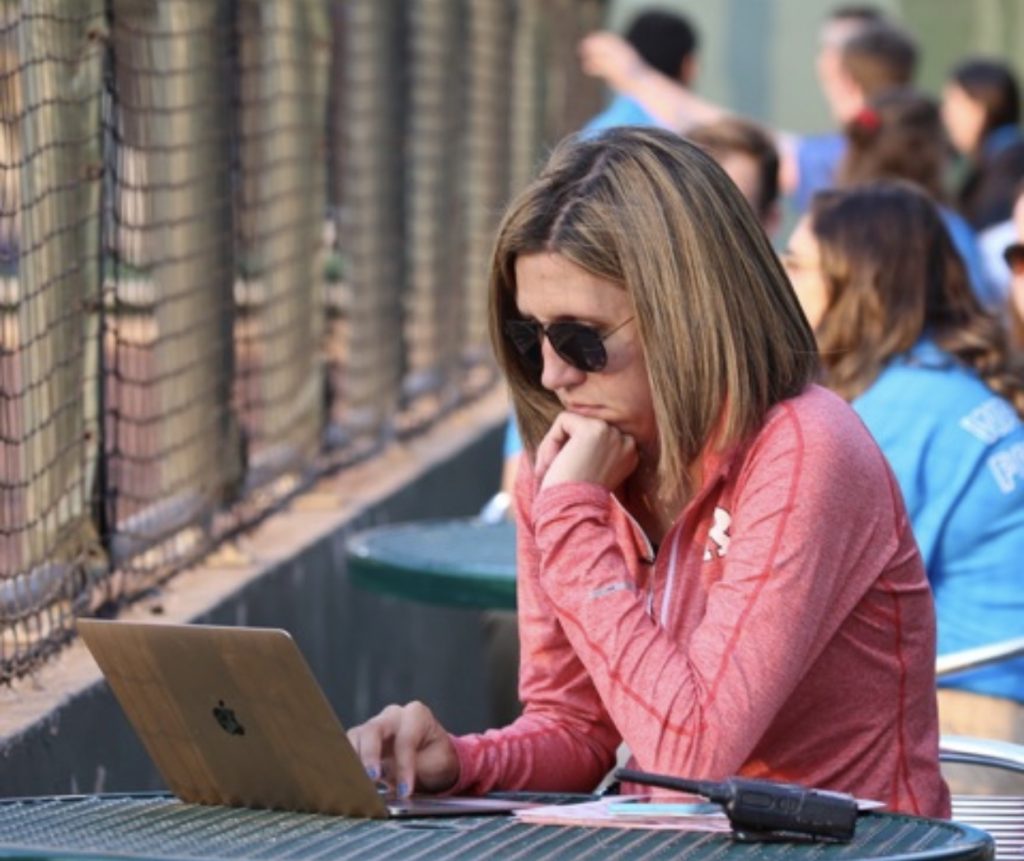 DoubleGSports: Women represent a major percentage in the Rockland Boulders organization, what does that mean to you especially now that you are the Assistant General Manager?

Megan Ciampo: We always joke around with Shawn (Reilly) about we don’t know how he deals with all the girls around here and say girls get things done. We think girls run almost every department here. Very easy to mesh and work well together. No bad blood, drama and our dynamic is very to the point to get the job done and multi-tasking and going back and forth on ideas.

A female run organization that sports not tends to be and I have gone into meetings with higher executives, different corporations and businesses to get them to come out to the ball park and introduce myself as the Assistant General Manager and very often assumed I’m the assistant to the GM. I’m not an assistant because I’m second in command and not one writing notes in meetings. I have been there and done it and put in my time and difference in getting the title and earning it.

Megan Ciampo: The fact they can break glass ceilings are so important for the world as a whole. I’m such at a small scale but the first woman Assistant GM here so if that helps an intern here one day or junior in college, more power to them. Being a woman in sports because it’s such a male-dominated industry you can pave your own way. I can follow X, Y or Z in whatever ranks but also makes it my own. No role to say how you move up the ranks, I can put it in the same amount of work as a guy in an organization and get to where is at.

The 2019 season brings a host of changes to the Boulders with Kevin Baez taking over managerial role as Jamie Keefe at the helm of the Boulders for six years departed to become the new manager of the High Point Rockers in the Atlantic League, a new roster and Palisades Credit Union Park hosting the All-Star Game between the Can-Am League and Frontier League and Home-Run Derby in July.

“Kevin (Baez) is super quick to respond if I need anything, seems very involved with getting us into the community and will be coaching the Can-Am League team,” said Ciampo. “Jamie did a really good job here, one of my closest friends to this, will continue to be and checks in to see how we’re doing and things he did are irreplaceable.”

“Players from all six Can-Am League teams and Frontier League has 10 teams so that’s another dynamic and demographic for us to get into. I sat in on a few meetings on what to expect during All-Star week and we have a lot planned and going to be good for our organization, both leagues and community.”

“The slogan is, “A Million Reasons Why It’s An All-Star Season” and helping to donate a million dollars to local charities and organizations and should hit that mark either in late June or July.”

The most important people to Ciampo are her family and has extended relatives that live in the area and come to all of the Boulders games.

“The support from all of them is unreal and my parents’ thought working in sports is not a normal thing to do. Every day over dinner it’s what happened and starting to learn the industry. I got home yesterday and my Dad said I have this group that wants to come out and do a fundraiser and told them about you. Once I started working and they saw the potential of growth they have been nothing but supportive.”

(Click to view more of our 2019 Women in Sports Inteviews)

The Yankees should take a second look at Dallas Keuchel
What are the Mets trying to do with these Baseball Operation hires?
Posting....