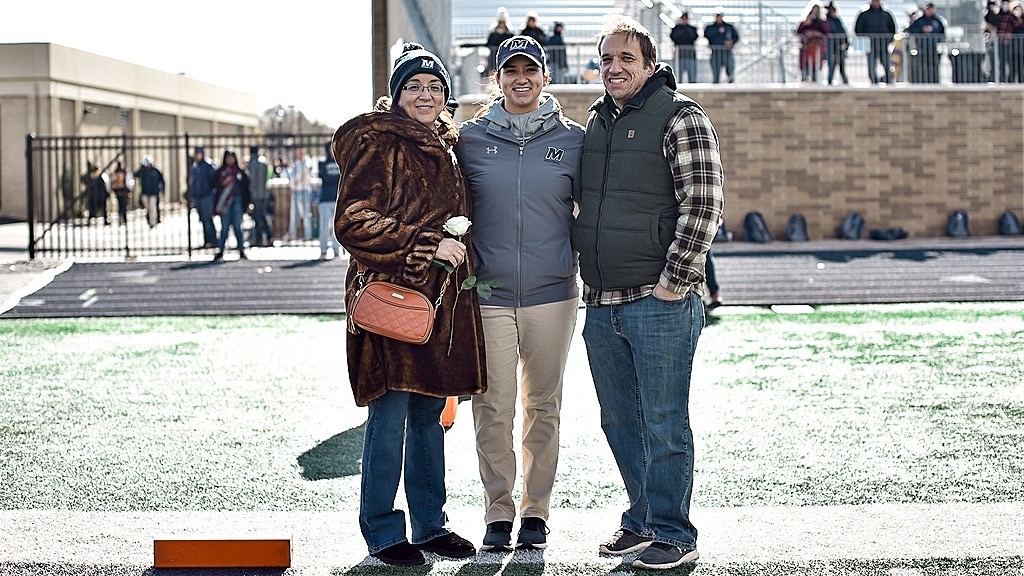 Sophia with her parents, Irene and Glenn Lewin. (Photo courtesy of Sophia Lewin)

Lewin has never played tackle football, but her love for the sport overpowers everything.

Sophia Lewin has never played tackle football, but her love for the sport overpowers everything. Her football IQ, along with her passion to be involved in the game, make her a great coach.

“I’ve always loved football,” Lewin said. “I remember watching it as a fan and falling in love with it.”

Growing up with her father, who was a huge Oakland Raiders fan, provided the perfect outlet for a young girl looking to enter the football industry. Lewin, who attended Monmouth University, hoped for more collegiate football experience after graduation.

However, a job offer came as a receivers and special teams coach at Hudson Catholic High School. This job has become her opportunity to cement herself as a successful female coach.

Her coaching style is largely influenced by her greatest role model, TJ DiMuzio, a receivers coach at Monmouth University, where Lewin also served as an assistant.

“TJ has taught me how to teach, and how to learn,” Lewin said. “He was someone who allowed me to learn the offense in my own way, and then also, as I got older, how to teach that to other players. Everyone has different learning styles, so he taught me how important it was to learn for myself, and then help other people know what we’re doing, and buy into the systems that we’re running.” 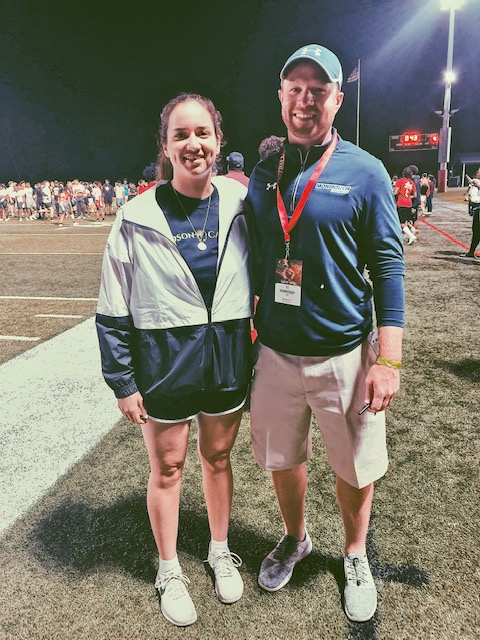 Despite being only 22 years old, Lewin’s presence on the football field is felt. Her players, along with the rest of the coaching staff, respect the expertise and experience she brings to Hudson Catholic.

“It was a welcome change, [staff and players at Hudson Catholic] were excited to work with someone who had experience at the college level,” Lewin said. “I helped them try to understand how to be a good worker, and a better football player, and I never had a ton of push back. The players have been great everywhere I’ve been, which is phenomenal, and the coaching staff is open to it.”

When asked what obstacles she has had to overcome as a female in the sports industry, Lewin was hardpressed to find anything.

“I guess just the preconceived notions,” she said. “Before they get to know you, people might have a lot of assumptions that are not true, and are not indicative of your ability or your work ethic.”

Those preconceived notions have not hampered Lewin’s ability to coach effectively though, as she believes that focusing on the negatives limits team success.

“It’d actually be hard if you focused on any of the ideas that held you back,” she said. “You just have to put your head down, and do the work, and get people around you who you can trust. Once they trust and see who you actually are, it makes it much more seamless. The good teams are able to do that.”

In her first year as a coach at the high school level, Lewin and Hudson Catholic have been a perfect fit for one another. However, Lewin’s long-term goals involve making history as a female.

While growing up, it was difficult for Lewin to see females working in the roles in which she currently holds.

“I had WNBA players, so that was the cloest I got to seeing players I could look up to,” she said.

Now, she hopes to be the female role model for young girls that was absent in her own time as a child.

“I hope that I’m visible, that I’m accessible, so that they can reach out and always get a response, or always feel like they can engage in a conversation with me,” she said. “I hope that they are able to see women doing the things that they want to do. I’m inspired, and more so empowered, by female coaches that have the jobs that I want, frankly, or women that are doing a really good job of representing us. I hope they see us, and come to see us, and reach out.”

As Lewin continues to pave the way for more females pursuing coaching jobs in the sports industry, she inspires those around her to dream big. As a child, she dreamed of coaching in the NFL. Today, she is one step closer to that goal.