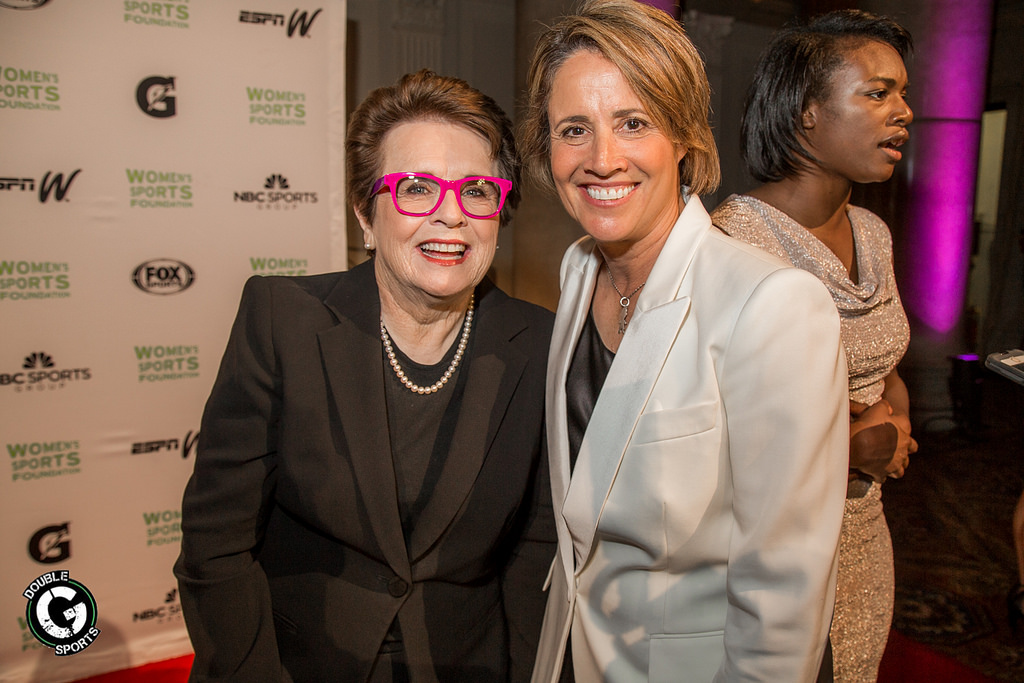 Women of the past, present and future were honored at the 39th Salute to Women in Sports Awards

This past week, a gathering was held in New York City, celebrating the achievements of women. Dozens of athletes, ranging from boxing to ice hockey to fencing came together at Cipriani Wall Street for the 39th Annual Salute to Women in Sports. Among those in attendance were Hilary Knight, Lauren Chamberlain, Caryn Davies and Claressa Shields.

The event was hosted by Billie Jean King’s Women’s Sports Foundation, founded in 1974. The night was the perfect opportunity to showcase powerful women, especially at a time when women are at the forefront history, whether in sports or life. Their goal is to promote inclusion for all women, with no restrictions for those looking to make a difference.

“More than 40 years ago we founded an organization to recognize the accomplishments, the breakthroughs, and the fearless female athletes creating change across the world. Tonight, we have the privilege of honoring some of those important individuals and teams who continue to speak out for equity and equality, challenge the status quo and compete to their fullest potential. This year consisted of groundbreaking accomplishments by female athletes, but it also highlighted the many hurdles that we’ve yet to overcome. Those very hurdles underscore the continuous need for organizations such as the Women’s Sports Foundation.”

Awards were presented at the event to those who helped make a significant impact for women, as voted by their peers. The following winners were announced:

Maddie Rooney (Team Sport Category) – The starting goaltender for the U.S. women’s hockey team in the Olympics, Maddie helping the team win gold for the first American win since 1998.

In regards to the latter’s win, Maddie’s teammate, Meghan Duggan, was very proud of her accomplishment. Speaking to Double G Sports, Meghan spoke about how important the event was for women everywhere. In regards to what she thought of the meaning of the saying, “play like a girl”, Meghan had the following to say:

I feel proud and honored. There are so many girls out there who look up to powerful female role models. To have the opportunity to be one of those, its an honor. We all take it very seriously. Every woman here is really powerful when it comes to sports and challenging that next generation to be the best version of themselves. That is a huge part of what this night is about.

Other awards that were given out include:

Caster Semenya – A two-time Olympic track and field middle-distance champion in the 800m. While there has been talks regarding her and gender testing, Semenya has managed to balance the backlash and love she has received by both fans and critics alike. With an issue that many go through today, Semenya became a powerful voice for fair rights, and a dominant athlete to boot.

Gail K. Boudreaux – A former basketball star for Dartmouth and current President/CEO of Anthem Inc., one of the nation’s leading companies for health benefits.

The BJK Leadership Award goes to someone who displays leadership for women while showcasing achievements on and off the field. A member of the New England Basketball Hall of Fame, Boudreaux uses her experience on the court to help lead an expanded roster of teammates off of it.

All in all, it was an event that brought together and celebrated powerful women who can all help to make a difference. While the goal can be accomplished, it requires everyone to work together. That includes men, no matter what industry you are a part of.

For more information regarding the powerful organization, please visit www.WomensSportsFoundation.org. You can also follow them on Twitter.