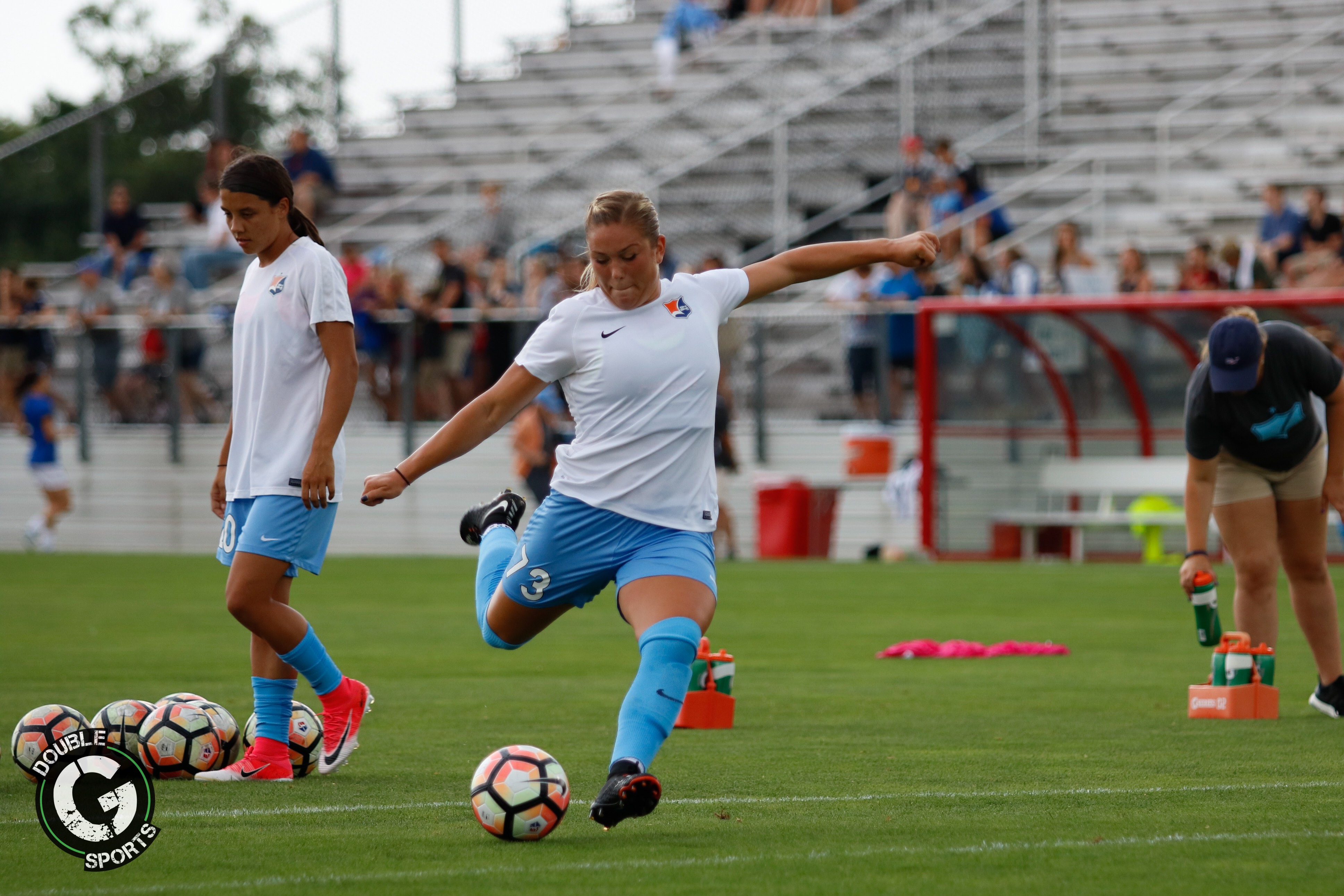 Women’s soccer has grown in popularity thanks to the success of our Olympic team.  Today, tens of thousands of young ladies run onto the soccer field with aspirations of being the next Carli Lloyd or Hope Solo.

One such lady, Madison Tiernan has embraced such a journey.  Madison started her soccer career on the recreation fields of Mount Laurel, New Jersey and went on to become a member of the Olympic Player Development Team.

All those hours of having mom and dad take her from one tournament to another has led to a career in soccer as Madison was drafted by Sky Blue FC of the National Women’s Soccer League (NWSL) and offered the Player Development coaching position for Rutgers Women’s Soccer.

We took a few minutes to learn more about her journey as Scott Mahnken, staff writer with Double G Sports Media, spoke with Tiernan earlier this week.

Madison, you’ve accomplished some great things playing soccer, did you play any other sports when you were younger?

I played softball and basketball.  In softball I played 2nd base and batted lefty, so I was a slap hitter, it’s a game I really love.  Eventually I was faced with a tough decision, whether to pursue softball or soccer, yet as much as I enjoyed playing both sports, soccer was my passion.

What’s your first memory of soccer?

It was playing for the local rec team when I was just 4 or 5 years old.  I developed friendships on that team that are still important to me today.  There’s a group of six of us that stay in touch and that’s so rare.

Does anyone else in your family play soccer?

Absolutely, keep an eye out for my sister.  She’s just a Junior but has already committed to playing for Rutgers.  I’ve told the coaches, she’s the true beast of the family.  My brother plays Lacrosse for Stockton and I come from athletic parents.  My mom was a speed skater and my dad played basketball and baseball.

When did you realize that you have above average skills?

Well for me it was a bit different.  When I went for a tryout with a very high-level travel team, I noticed that I was not as dominant on the field and this was rather humbling.  It made me work harder and thanks to some great coaching I was able to live up to my full potential, which turned out to be above average – I guess.

Tell me about your experience playing on the Olympic Player Development team?

How was your High School team?

We had a very strong team and played in the state final game 3 of my 4 years.  Sadly, we lost to a school that was known as a soccer powerhouse – Lenape.

What influenced you to select Rutgers as your college?

I was fortunate to get to know the current Rutgers Women’s soccer coach, Glen Crooks, while playing on the ODP team.  His style of training, coaching and motivating was exactly what I was looking for, so it was an easy decision and one that I’m very glad I made.

What was your most memorable game in college?

That’s an easy one!  It was an Elite 8 game versus number one ranked Virginia.  We were a significant underdog.  Although we outplayed them the entire game and through the two overtimes, it came down to Penalty Kicks.  Fortunately, our keeper made incredible saves to lead us to an upset win.

WOW! That’s a great story. Who’s been your most influential coach?

I’ve had so many great coaches, that’s what helped me get here, but if I had to pick one it would be John Jenks.  He was the first coach to truly believe that I could accomplish some great things if I set my mind to it.  Coach Jenks coached our Mount Laurel travel team and eventually joined PDA.

Describe your role as Director of Player Development at Rutgers.

It’s a volunteer coach’s role.  My responsibility to is to support the girls throughout the season as they work through adjustments, tough times and making it through a long training and playing season.  Sometimes we’ll work on a skill and other times we’ll just talk through different questions or issues.  It’s not necessarily an easy adjustment going from living home playing high school ball to college where there’s travel and you still have your course work, so I help players with that transition. 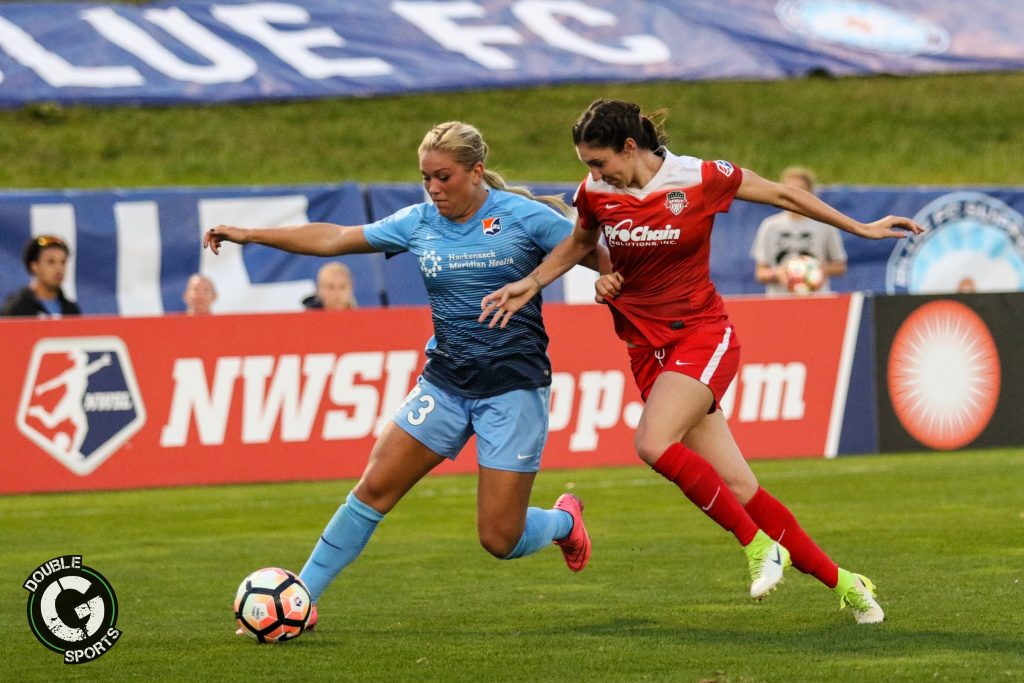 How does it feel to play for Sky Blue?

I’m so proud to represent my state (New Jersey) it’s like a dream come true.  We’ve been working real hard in the preseason with our new coach Denise Reddy, who by the way is a Rutgers graduate.

What advice do you have for young soccer players that aspire to be like you?

Put in the extra time.   All the little things you do will add up to big results.  My personal theme was always “Work when no one is watching” it develops a special character.

What will you take from the soccer field into your professional career?

Teamwork.  I learned to be a part of a team and how to share responsibilities.  You learn that people will always do more for the team than they will for themselves.  I also learned leadership and every project needs a leader.

Where will we find Madison Tiernan in 10 years?

Well, my degree is in History and I’ve always wanted to be a teacher.  Of course, I also want to remain active in coaching.

Sounds like a position at the middle school or high school as history teacher and soccer coach might be in your future.

Sounds good, especially if it’s near the water, I love the summer time.

Madison, last few questions, we call this the “lightening round.”

Favorite Movie: Little Giants (The boys in my neighborhood called me Icebox because I played football with them as a young girl)

Your Hero: My Pop (Grandfather) he passed away while I was a freshman in college.  I always wrote his name on my uniform and have a tattoo of him on me as a tribute.

WTA Stars Participate in “Tie Break Tens” at MSG
Women in Sports: Anya Battaglino Carries the Confidence of a Hockey Player Day In and Out