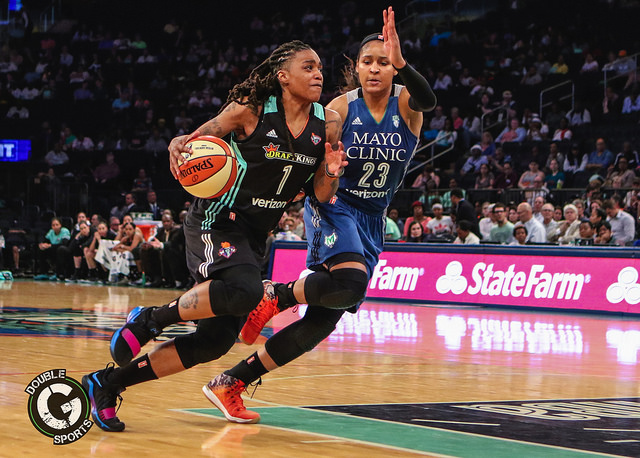 Shavonte Zellous scored 28 points, including the tying jumper with less than a second remaining in regulation, and the New York Liberty beat the Dallas Wings 102-93 in overtime on Friday night. Shavonte Zellous score in double figures in 6-straight games. Zellous also led the Liberty with 6 assists and had 8 rebounds.

Tina Charles added 25 points, 10 rebounds and four blocks for the Liberty (7-4), who outscored Dallas 14-5 in OT and have won five of six. Sugar Rodgers contributed 19 points, including two free throws with 2:53 left in overtime that put New York up for good 92-91.  The Liberty were playing its 1st overtime game of the season after playing in 6 OT games in 2016. New York was 3-3 in OT games last season

Skylar Diggins-Smith had 23 points for Dallas (4-8), whom continues to slide in the wrong direction. This was the liberty’s second win over the Wings this season. Skylar Diggins-Smith missed a crucial  free throw, that would of given the Wings a three point lead in the finals seconds. After the Diggins miss, Zellous in bounded the ball, got it back and then knocked down a mid range  jumper over Johnson from the right wing with less than a second to play to tie the game at 88.

Hustle and Muscle On The Boards

The Liberty outscored Dallas 14-5 in overtime, after limiting the Wings to just 34.0 percent shooting in the 2nd half. The Liberty also won the battle on the boards, out rebounding the Wings 40-34. The Liberty’s ability to maintain a consistent offensive presence was the reason why they were able to shut out the Wings 102-93 in overtime and prove that timing really is everything when it comes to offensive boards and need-to-make shots. Overall, it was a great bounce back performance for the Liberty, considering they were blown out by Connecticut Suns on Wednesday night.

New York returns to action on Friday, June 23, when it hosts the Connecticut Sun at Madison Square Garden for Pride Night. Tip off is scheduled for 7:30 PM.