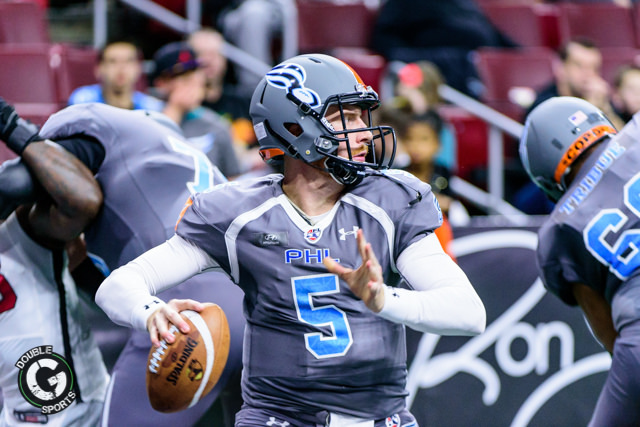 PHILADELPHIA – Back to back.

While no word was given during the game, according to Arena Insider’s Anthony Carter, Raudabaugh played with a torn ACL.

“I felt okay out there because it was just something I had to fight through,” Raudabaugh said. “When it’s the final game of the season, you have to go all out.”

With a packed house on hand, including majority owner Ron Jaworski and former Eagles, Rams, Chiefs and Super Bowl winning coach Dick Vermeil in attendance, the Soul certainly fed off of the home crowd.

“Just wait until you see the next ring,” Jaworski said in reference to the upcoming championship rings for the organization.

One in particular, rookie Darius Prince stole the show at wide receiver. The young buck hauled in two touchdowns to help complete the Soul comeback. He was also named game MVP.

“He really stepped up tonight,” Raudabaugh said. “He was big in certain spot and it was key for us to get the win.”

Trailing 20-14 at halftime, the Soul reclaimed the lead once and for all as Raudabaugh found Darius Reynolds for a 40 yard touchdown to take a 21-20 lead, which the never relinquished.

The dagger however came from the Soul defense. Leading 35-27 in a one score game, Sean Daniels sacked Tampa Bay quarterback Randy Hippeard for a safety and an extra two points.

The safety in the fourth quarter was a first in Arena Bowl history.

As the clock hit all zeros, the Soul entrenched their franchise into the history books as they became only the fourth time in Arena Football League history to win back to back world championships.

Head coach Clint Dolezel credited the team’s effort all season to go out on top once again.

“These guys have fought all season long,” Dolezel said. “We will enjoy this one for a while before getting back to work.”

Nick is an NFL Analyst at DoubleGSports.com as well as the Philadelphia Soul Beat Writer.