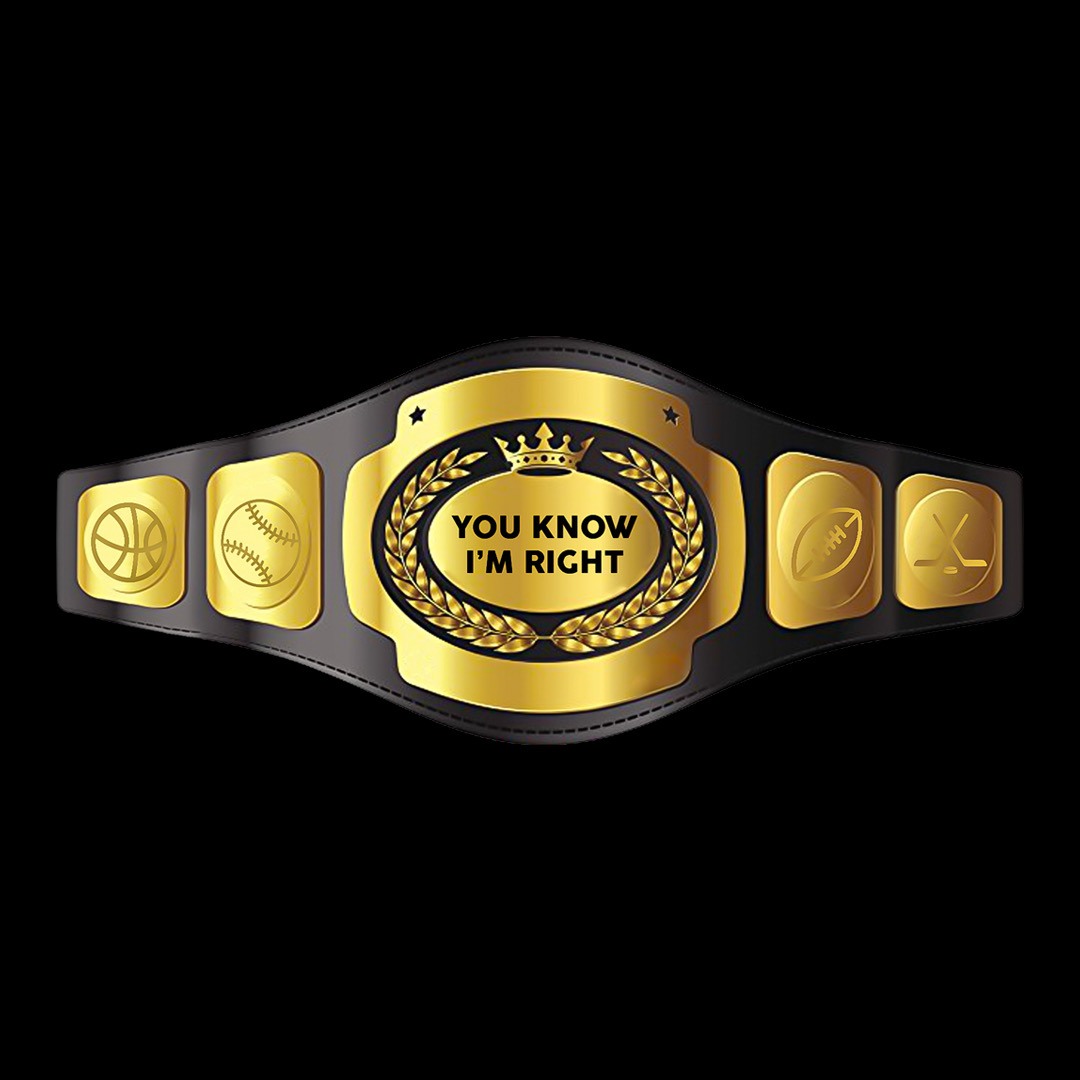 How the You Know I’m Right Podcast Reached 100 Episodes

Have you seen Episode 💯 yet? This is a MUST watch!

A special congrats to @Nick_Durst and @JCalabrese1 for a successful first 100 Episodes, with many more on the way!

The 100th episode of the You Know I’m Right (YKIR) podcast on In The Zone represents a milestone for Nick Durst and Joseph Calabrese, who produced the show and have built it from the ground-up since Mar. 2020.

Nick Durst used to work as a social media intern on a show called “Changeup” which was on MLB Network in 2019. At the studios of MLB Network, Durst became good friends with Adnan Virk and Scott Rogowsky and his relationship with both of them would end up paying off for Durst down the road. Durst discussed how Virk ended up helping him contact the first guests of the You Know I’m Right podcast.

“Without getting Adnan on as the first guest, it might’ve been tough to get other guests on the show. I have to thank him for coming on. A few weeks later I had Stephen Nelson on so that gave me a good basis for when I was reaching out to guests.”

During these first 100 episodes, the YKIR podcast has had on guests who have included Kenny Albert, the son of legendary NBA play-by-play announcer Marv Albert, who calls NFL games on FOX and NHL hockey on NBC Sports, NBC Sports on-air hosts, Kathryn Tappen and Liam McHugh, MLB Network’s on-air host Greg Amsinger, and Greg Gianotti co-host of the “Boomer and Gio” show on WFAN, which he appears on with former NFL Quarterback Boomer Esiason.

While the You Know I’m Right podcast focuses on telling the stories behind the careers of famous sportscasters, Durst and Calabrese have also managed to vary their guests from time-to-time. Durst and Calabrese recently interviewed actor Scott Patterson, from the hit TV series Gilmore Girls and David Brody the executive producer of “the Elvis Duran Show” on the Z100 radio station.

Since last March, the You Know I’m Right podcast on In The Zone has featured interviews with past and present sportscasters and experienced professionals in the TV and Radio industries. Here is a clip from You Know I’m Right’s 100th episode with Adnan Virk who talked about how his sports broadcasting career came to be.

Wondering how the voice of RAW, @adnansvirk caught his big break and finally became an on-air reporter? He told our very own @Nick_Durst on You Know I'm Right.

Nick and Joe’s podcast has brought the unique life-stories of actors, radio professionals, and sports broadcasters to light! Let’s take a look at how Durst and Calabrese were able to record 100 episodes, right here on In The Zone!

Since Nick and Joe published their 100th episode, Nick and Joe started interviewing some different guests from other walks of life and career paths. Calabrese described what being able to talk to a variety of guests, has been like through his eyes and ears.

“We really enjoyed having David Brody and Skeery Jones from the Elvis Duran Show on with us. To incorporate sports with the entertainment and pop culture world, to have [David and Skeery] on and enjoy the episodes we recorded, was a huge blast.”

The You Know I’m Right podcast was started in Mar. 2020 when everybody was still under state and country wide quarantine. While the pandemic has hurt millions across the globe, it has given the hosts of You Know I’m Right the opportunity of a lifetime to reach out to experienced sports broadcasters and ask them to join the show. Durst described:

“In a sense, the pandemic has been helpful as it has really benefitted us to get the podcast off the ground and [give it some] major momentum,” Durst said. “The Guests have more time too [because] they’re home and not traveling from city to city on planes. They’re more willing to talk.”

Nick Durst told me how his website, In The Zone once went by the name Double G Sports, which was a site to giving its readers news related to on-the-field events. However, in March 2020, Double G Sports changed to “In The Zone” and since then the new website’s purpose has been to feature stories about what goes on in the lives of athletes off-the-field.

Durst was able to described how he came up with the original idea for the You Know I’m Right podcast.

“The way I structure this show is to get the origin-stories of anyone who comes on the show,” Durst said. “I want them to speak about how they got to where they are today and that helps me but it also helps our listeners or anybody who’s trying to break into the broadcast industry.”

In November 2020, You Know I’m Right podcast switched to a video interview format with its guests. This has allowed Durst and Calabrese to post short video clips of their hour-long podcast episodes and post them to Facebook and Instagram, while the whole show gets posted to YouTube.

Nick Durst grew up watching Baseball Tonight, a show that previews each night’s upcoming baseball games, for years. It’s for that reason that the opportunity Durst had to interview Tim Kurkjian, was a dream come true.

Interviewing a sports journalist and Television personality with the credentials that Kurkjian has, was a major accomplishment for Nick and Joe. knowledge on baseball past and present and his distinctly friendly personality have been a big part of ESPN’s Baseball Tonight broadcasts during baseball season for over 20 years. Fans are familiar with Kurkjian, but what do fans know about Tim Kurkjian’s life off-camera? This is what You Know I’m Right does—it gives successful people in the broadcasting and entertainment industry a chance to have a real discussion about their lives with the hosts. This is the biggest takeaway Nick took away from his first 100 episodes.

“The key thing that a lot of these guests [have said on the show is that] they got to where they are in their careers by being in the right place at the right time. So that’s the big takeaway.”

Nick interviewed NBC announcer Mary Carillo. Carillo began her career in 1996. Since 1996, the former Pro Tennis player has worked 14 Olympic tournaments and announced at every grand slam tennis event since then.

Carillo grew up in Queens, New York where she would become close friends with American Tennis legend, John McEnroe. As Doubles partners, Carillo and McEnroe won the Doubles Championship at the 1977 U.S. Open.

You can hear more about Carillo and her career by clicking on Episode 82 of YKIR.

Nick explained what he loved the most about Carillo’s personality when she came on as a guest in early January.

“Mary Carillo from NBC was so funny, so kind. [I was] not expecting her tremendous personality to shine through, but she was just awesome and definitely a memorable guest.”

Durst also mentioned that Carillo loved the name that Durst and Calabrese had chosen for the podcast ‘You Know I’m Right’ These are also the four words that Nick opens the show with. Nick explained why he appreciated the support for the show-name that Carillo gave him.

“Around that time I was getting feedback from some haters [who were saying] that the show name didn’t make any sense, but Mary liked it,” Durst said. “Our signature close and start is me saying the show name so, its sticking, and it was great to hear that coming from her.”

During our recent zoom interview, I asked Nick how he was able to contact and ask each guest to come on the show. Most things in life take a ‘never give up’ attitude and that’s the kind of attitude that Nick and Joe have shown by booking so many impressive names in the sports broadcasting field.

“The biggest hurdle and obstacle is, when you get in-contact with a big name and they’re like ‘you got to go through the PR [Public-Relations] person.’ This happened a lot with Wrestling. They’ll say I’ll come on, but you got to ask PR and they don’t answer you. It’s frustrating but you just got to follow up and be consistent.”

Co-host of the You Know I’m Right podcast, Joe Calabrese has been with the show since May 2020. He described what Nick has done to make the podcast run. He described the hard work that his partner Nick Durst has put into the show from the beginning.

“Nick does all the extra behind-the-scenes work like editing, sending emails and staying in contact with people. He is the hardest working man in show business. I’m proud of what he has accomplished, proud he wanted me involved from the beginning, and proud I get to call somebody so unselfish, driven and determined a close friend.”

For Nick Durst and Joe Calabrese, the You Know I’m Right podcast is a landmark accomplishment in their young sports broadcasting careers. In one year, Nick and Joe have built a podcast that has featured famous people from sports broadcasting, professional athletes and even music and entertainment industries.

The hard work that they have done to build a great podcast, reminds me of a line from my favorite sports movie, “Field of Dreams” starring popular actor Kevin Costner who has starred in many baseball movies. When Costner’s character walks through the corn field on his farm as he dreams about building a baseball field there, a mystical voice tells him, “If you build it, they will come.”

Durst and Calabrese have built a podcast of dreams and the guests and people have all come to see it. Nick and Joe believe in their podcast and as far as booking guests and promoting the finished product on social media, they have done better than anyone else in the broadcasting industry. Nick Durst and Joseph Calabrese have produced a podcast that has featured some of the biggest and brightest names in the sports broadcasting world.