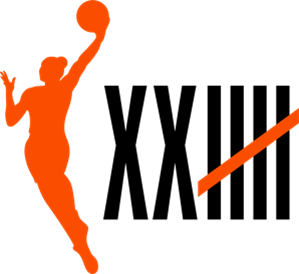 The WNBA’s 25th season also marks the debut of the WNBA Commissioner’s Cup.

The WNBA is going all out for its 25th anniversary season. In celebration of Women’s History Month, the WNBA announced plans for the league’s 25th season, which include a new campaign called Count It, and an inspirational new 25th season logo.

Among season-long celebrations to highlight the league’s milestones and breakthroughs over the years, all 12 WNBA teams will host specially-themed events and fan promotions.  The WNBA will also celebrate the ways its players have shattered expectations and have stood at the forefront of advancement, inclusion, and social change for 25 years.

The WNBA’s 25th season also marks the debut of the WNBA Commissioner’s Cup, an innovative and multi-faceted competition platform. A “competition within a competition” that features player prize pools, the Commissioner’s Cup is comprised of ten regular-season games per team and culminates in a championship game between the two teams atop the standings in each conference. The championship game will take place following the Olympic break as a jumpstart to the resumption of the regular season.

“We’re working really hard on the schedule,” WNBA commissioner Cathy Engelbert said. “We have to get safety protocols in arenas and are hoping to play in our arenas like other sports are doing. Play in our 12 cities, as the 12 markets are working on arena protocols, testing, and health and safety.”

The league also plans to continue to support the WNBA Justice Movement. It’s the platform through which the league will continue to lead important work in the community to combat racial and gender inequality, promote advocacy for LBGTQ+ rights, and champion reform in systems where injustice persists.

The WNBA has grown since the league’s first year and with their 25th upcoming season, the attention and future of women’s basketball will be on full display for everyone to see. The ladies of the WNBA will have a spotlight on them like never before and most of that will be because of the way they handle themselves in the summer of 2020