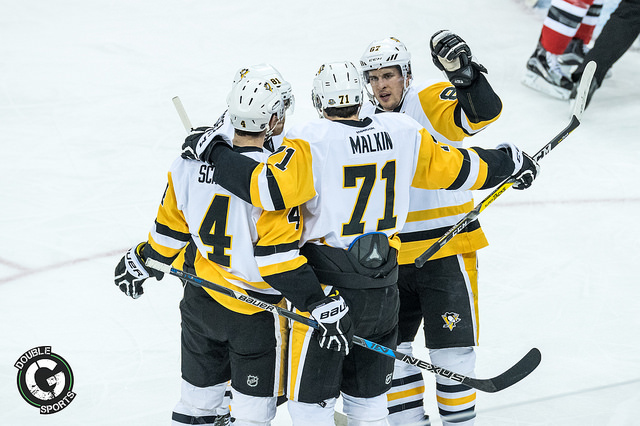 The Pittsburgh Penguins became the first team to win back-to-back Stanley Cup Championships in 19 years on Sunday night at Bridgestone Arena in Nashville, Tennessee after defeating the Nashville Predators 2-0 in game six.

As a matter of fact, the last time any team from Pittsburgh clinched a World Championship on home field, was on October 13, 1960, when Bill Mazeroski hit a 406-foot home run in the bottom of the ninth at Forbes Field, giving the Pittsburgh Pirates a World Series victory over the New York Yankees.

Since then the Pirates won the World Series in Baltimore in 1971 and 1979, the Pittsburgh Steelers won their six Super Bowls all in neutral sites and the Penguins won their Stanley Cups in Bloomington, Minnesota (1991) Chicago, Illinois (1992), Detroit, Michigan (2009), San Jose, California (2016) and Nashville (2017).

Game six was a tight battle all night long. After a scoreless first period, the Predators thought they had opened the scoring just over a minute into the middle frame, as Colton Sissons appeared to put the puck in the net. The ref blew the whistle though before the puck crossed the goal line, after losing sight of it and disallowing the goal.

Both goaltenders kept the puck out of the net through the second period and a majority of the final period, before Patric Hornqvist was able to put a rebound, off the back off Predators’ netminder Pekka Rinne, into the back of the net with 1:32 left in regulation to give the Penguins a 1-0 lead. Nashville challenge the goal for goaltender interference, but was unsuccessful in their challenge.

Carl Hagelin would add an empty-net goal with 13.2 seconds left in the game, to ice the victory for the Penguins. Goaltender Matt Murray managed to turn away all 27 shots he faced to put up his second straight shutout of the series.

Penguins’ captain, Sidney Crosby won his second straight Conn Smythe Trophy as Most Valuable Player of the Stanley Cup Playoffs, becoming just the third player in NHL history to do so, joining Bernie Parent of the Philadelphia Flyers (1974 & 1975) and Mario Lemeiux of the Penguins (1991 & 1992).

In regard to being able to become the first team to repeat as champions in almost 20 years, Crosby told NBC Sports, “That was our goal from the start of the year, we knew it had not been done in a long time. To be able to accomplish it is a great feeling.”

Crosby finished second, behind teammate Evgeni Malkin, in scoring throughout the postseason as he put up eight goals and 19 assists in 24 games.

He added, “We knew it was going to be tough all year. We just tried to keep with it. We had a lot of injuries and things like that, so we just kept finding ways. That was really what we did all season, and all playoffs, and it was great to be able to do it.”

In winning their fifth Stanley Cup, the Penguins became just the seventh team in NHL history at least five. The Montreal Canadiens lead the way with 24, followed by the Toronto Maple Leafs (13), Red Wings (11), Boston Bruins (6), Chicago Blackhawks (6) and Edmonton Oilers (5) are the other six.

The Oilers and Penguins are the only two non “Original Six” teams to have five or more championships. Prior to the Red Wings being the last repeat champions, the Penguins repeat in 1991 and 1992.

The Canadiens lead the way with the most repeat championships at 10, their most recent being four in a row from 1976-1979. The Maple Leafs have four, Red Wings (3), and the Oilers have two like the Penguins.