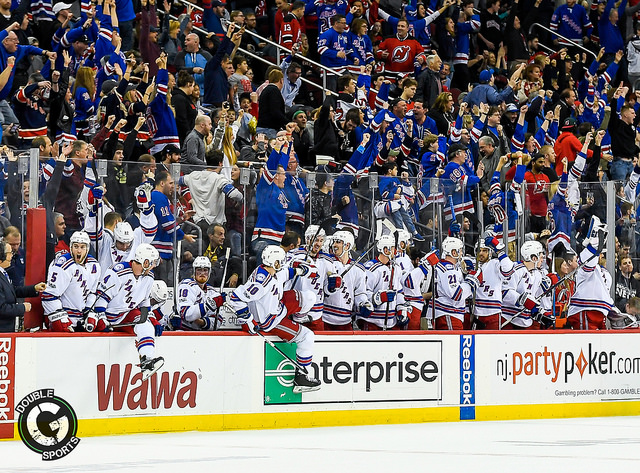 Canada Day, celebrated July 1, marks the anniversary of Confederation in Canada. On July 1, 1867, the colonies of Nova Scotia, New Brunswick, and Canada joined together under one Constitution. Originally celebrated as “Dominion Day” (just like the Stanley Cup used to be referred to as the “Dominion Challenge Cup”), the national holiday celebrates a major milestone in setting the groundwork for modern-day Canada.

150 years later, including 100 years of NHL Hockey, how fitting is it that free agency is set to begin on Canada Day where players getting out of old obligations look to enter into new contractual relationships with new or old teams?

Prior to the 2017 NHL Draft, the New York Rangers parted ways with top-line centerman Derek Stepan and Antti Raanta, the solid backup netminder who filled in for Henrik Lundqvist when “The King” was struggling. While the Rangers received young defenseman Anthony DeAngelo and the seventh-overall pick in the exchange from Arizona, along with a buyout of Dan Girardi last week, the Rangers are now left with a lot of cap space with only a couple of modest contracts to renew.

There are some big names that are set to hit the market on July 1. Some of them, like Joe Thornton, Patrick Marleau, and Kevin Shattenkirk highlight the marquee.  These players would be terrific for the New York Rangers – if it was circa 2010.

The Kevin Shattenkirk-Rangers talk has been rumbling for several seasons already. Shattenkirk, a New York-Metropolitan area-native has expressed an interest in the past in playing for his favorite childhood team. But now he’s 28-years old, and he is expecting a major contract offer coming his way. The market for someone of his caliber dictates a deal along the lines of seven years and at least $6 million per year towards the salary cap – and that is with a “homecoming” discount. Oh, did I mention he will probably demand some sort of no-trade or no-move clause, just like every marquee player seems to receive these days? If you think the Dan Girardi contract was awful enough to warrant a buyout, you have not seen anything yet.

By the time Shattenkirk’s hypothetical contract expires, he will be 35-years old, and well past the prime of his career.  Does Rangerstown want to get excited about the prospect of ragging on Shattenkirk in three years as he begins his decline, but yet he won’t be able to be moved except for a buyout? Pass.

Patrick Marleau, the 37-year old winger, has been in a steady “decline” since the 2009-10 season where he pot a career-high 44 goals and totaled 83 points, his career second-best. Last season, Marleau lit the lamp 27 times – pretty good for a guy at the tail end of his career, and certainly not bad for anyone at the NHL-level. The problem, however, is that his cap hit over the last three seasons was $6.66 million (CapFriendly.com), and he’s likely not looking to take that big of a pay cut. Furthermore, he would probably want at least a couple of years.

All of this is moot, though; the Rangers have plenty of wingers, as well as centers who have been playing on the wing. The Rangers need a centerman to fill the void. Yes, he is billed as able to play center as well. Does that mean Rangers’ General Manager Jeff Gorton should pursue him? If that was the case, the Rangers should have just kept Stepan for four more years. After all, Step is a decade younger than Marleau.

That brings us to Joe Thornton. “Jumbo” Joe will be 38-years old the day after Canada Day. Last season, the veteran-playmaker put up 50 points. Like Marleau, this is pretty impressive for anyone, and especially a player his age. But, it is still a major drop off in production from his last year’s totals (82). Regardless, he could be a quick-fix to the power play.

The problem, however, is that the Rangers also have an abundance of guys who seem to enjoy passing the puck instead of shooting and scoring. Yes, I’m aware the Rangers ranked fourth in the league in goals per game. Rangers were also 22nd in shots per game and 11th in power play success. Imagine what this team could have accomplished with more shots on goal and an improved powerplay?

Thornton’s 50 points last season included only seven goals. And also like his fellow San Jose Sharks teammate, his cap hit over the last three seasons was pretty hefty, coming in at $6.75 million (CapFriendly.com). He won’t command similar money going forward (unlike Andrei Markov in Montreal), but he will command around a cool $5 million, no matter how short his stay in New York might be. Speaking of which, one year would be suitable for both parties, but this is all contingent upon whether San Jose and Jumbo may or may not work out in the next few days.

It should also be noted that Thornton is coming off surgery to repair an ACL and MCL, both of which he tore. While he played through the injuries in the first round of the playoffs against the Edmonton Oilers, Thornton has already put several miles on his legs, appearing in 1,446 regular season games and 160 playoff games. The risks of a major drop in production or worse – another serious injury – are even higher as Jumbo Joe inches closer to 40.

Just because free agency frenzy is about to begin does not mean we can’t still talk about possible trades. Could a deal be made to pry Matt Duchene from Colorado? What would that take? Apparently, Avalanche GM Joe Sakic turned down Garth Snow’s offer of Travis Hamonic and a first-round pick for the speedy top center. If that’s the case, it is possible that Brady Skjei alone couldn’t get a deal done. Rangers would be getting back that true number one pivot they have been longing for, but the Broadway Blueshirts would be losing perhaps their best future asset: a puck-moving defenseman with terrific potential. The proposal is tempting, but I pass.

There are certainly some other centers around the league that are set to hit the market on July 1. Nick Bonino just won the Cup two years in a row with the Penguins. He could come cheap. Same goes for Martin Hanzal who is probably itching to stay with a playoff-contending team now that he’s 30-years old. The problem, however, with guys like Bonino and Hanzal is not necessarily the amount of money demanded, but the years they are likely seeking contractually. While they are both good bottom-six options, the Rangers have good depth already, even in the absence of Oscar Lindberg; the Rangers need top-six talent up the middle to till the void.

The Rangers need a couple of placeholders for now before their prospects are absolutely NHL-ready. Lias Andersson, taken seventh-overall, and Filip Chytil, 21st-overall, are two centers that are somewhat close to being NHL-ready, the former closer than the latter. However, the two first-rounders, the Rangers’ first since Skjei in 2012, might still take anywhere from one to four years to develop, whether that may be in North America or a continuation in Europe. If Hanzal or Bonino, for example, are signed to a four-year deal, and Andersson, say, is ready in half that time, where does Andersson fit into the mold? Does that spell the end of Mika Zibanejad as a Ranger in a few years? Maybe.

Gorton is facing a catch-22 here. Does he risk boxing out Andersson by going with depth pivots, or does he bite the bullet and go for Thornton for one year? If Thornton decides to stay on the west coast, is Kevin Hayes ready for a number-two role behind Zibanejad? Is Zibanejad equipped to matchup against the likes of Sidney Crosby, John Tavares, or Auston Matthews? Given that possible scenario, even I am surprised in hoping Thornton is alright with a one-year deal to call the World’s Most Famous Arena home.

As for the back end, as per Bob McKenzie via Twitter, the Rangers have reportedly struck a deal with defenseman Brendan Smith. Smith, who was acquired by the Blueshirts from the Detroit Red Wings at the trade deadline, will be signed to a four-year deal worth $4.35 million per year against the salary cap.

Sure, Smith is 28, just like Shattenkirk. No, Smith’s production at the blueline does not even compare to that of Shattenkirk’s, and neither does his defensive prowess. But the Smith deal is for less money and certainly less time for which Shattenkirk’s contract would require. And if Kevin Klein actually chooses to retire, Smith’s contract will look even better.

It is unclear whether or not any of several defensive prospects slide into the sixth and seventh D spots. DeAngelo appears to be the front-runner to squeeze into the last roster spot as he has already appeared in 39 NHL games with the Coyotes last season.

There are certainly some defenders worth taking a peek at on the market, such as Karl Alzner. But like the aforementioned forwards, Alzner, who will be 29 by season’s start, will want some geographical stability for his family. While the iron-man defender won’t likely command Shattenkirk-money, he will probably seek years in a deal, that which will prevent the defensive squad from getting younger.

It all goes down July 1. Let the frenzy begin.