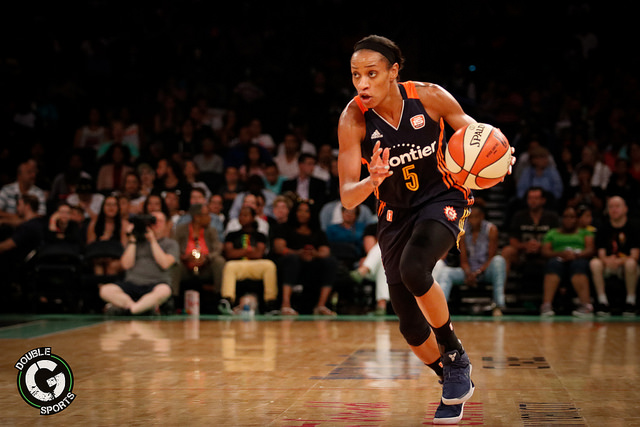 With a 21 point lead evaporated, the Connecticut Sun found themselves tied with the New York Liberty with 1:06 left in the fourth quarter.  The historic Madison Square Garden was electric with 10,240 Liberty fans willing their team to victory on Pride Night. Connecticut gets two stops and a bucket to earn a two point lead with 1:06 to go.  With less than 20 seconds left in the game, Jasmine Thomas nailed a 3-pointer to seal the fifth straight win for the Connecticut Sun.

Thomas finished with a season-high 23 points yesterday. “It’s definitely good to see us mature and grow and not get frustrated … there was a lot of good going on all over the court,” Thomas told Double G Sport after the game. She added that, execution will need to improve as opponents get more familiar with the team’s ball moving characteristics.

Connecticut capitalized down low, scoring nearly a third of their 94 points in the paint.  The Sun added 13 3-pointers, including a 3/5 night from center Jonquel Jones.  “This game, they really congested,” said Jones postgame, “it kind of naturally opened up so we had to be ready to shoot it [from the perimeter].” The George Washington alumna posted 21 points on the night, while grabbing seven rebounds.

The current Sun streak is more about learning to finishing, as opposed to increasing the overall compete level, “Aside from our game at Minnesota … all our games have been close.” Therefore, Friday’s win when the game was close in the last two minutes is a sign of growth.

So, is this team ready to win it all?  Well, Jasmine Thomas think that is putting the cart before the horse, “I think you strive for the highest goal, and if you can make the playoffs, absolutely the next step is to win a championship. So we’re [focusing] on one thing at a time, that’s to play well and make the playoffs and then we’ll go from there.”

The immediate next step is a win in Dallas.  The Sun continue their against top scoring rookie Allisha Gray. The Sun will return home to take on the Los Angeles Sparks on Tuesday, before returning home Thursday to face the Seattle Storm. The homecoming will include a celebration of the Sun’s 15th season with alumna Nykesha Sales, Rebecca Lobo and Katie Douglas.  Fans will celebrate at Mohegan Sun Arena for the 8p.m. match that will also be broadcast on ESPN2.