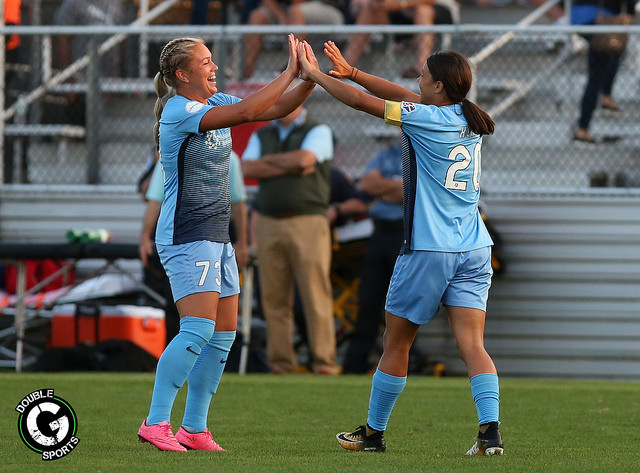 The last time Sky Blue FC got a clean sheet was July 1 at North Carolina.  Saturday, the team got its third shutout, and more importantly, three points to remain in playoff contention. New Jersey jumped to fifth place in the NWSL standings with 27 points on the season. Here are the takeaways from tonight’s Sky Blue FC win over the Boston Breakers

With the loss of Christie Pearce, the average age and experience level dropped significantly. However, since the two-time World Cup Champion announced she would not continue the season, Sky Blue is 2-0. Coach Dave Hodson has asked the entire team to focus on spacing, “we’ve done things specific [to] the whole eleven [player] unit of being closer together. Our lines are closer together, our teammates have each other’s back. It’s mentality rather than anything else.”

Between injuries and struggles with a performance from rookies, the backline for Sky Blue has been a revolving door. Additionally, for the first time, the team cannot rely on Pearce on the field or even on the bench. The veteran has not made an appearance since announcing she would rest the remainder of the season.

That has forced players like Domi Richardson and Kailen Sheridan to step up.  “She a legend, so it’s big shoes to fill,” said Richardson in regard to moving on without Pearce. “But all of us have to step up. Your time comes when legends stop playing. So, we’re just ready and everyone is super-excited to be playing.”

For the second consecutive win in a row, Richardson has played center back alongside Mandy Freeman.  Second-year defender Erica Skroski and rookie Kayla Mills have been on the outside. Kelley O’Hara returned from injury last night in the 59th minute. 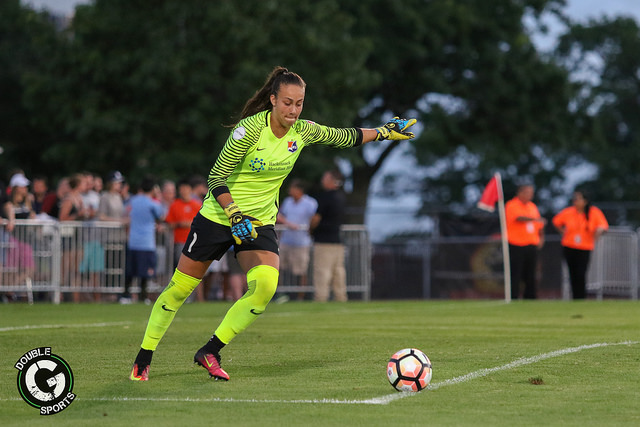 Keeper Kailen Sheridan is the only rookie to play every minute of every game this season. She has battled through a lot mentally and physically throughout the season. “It’s definitely been tough mentally,” said Sheridan.  As the last line of defense, it’s easy to feel responsible for multiple goal games. However, the young Canadian is learning to focus on the long-term and not dwell too much, “this is my first year and there’s so many more to come … if I don’t fight through this now, I won’t be able to get through this later.”

Part of her growth is learning how to communicate with her team.  Sheridan has always been a vocal keeper but has ramped up the chatter with Pearce out and O’Hara only available off the bench. Sheridan is focused on how to help her backline through more communication. She knows her teammates have been forced to take on a lot of responsibility of late and wants to ease the strain. Sheridan has seen improvements and more confidence from her defenders, “They’ve had to step up a lot and tonight is the first night that I saw it [come together] and I’m so proud.”

Despite six points in the last three weeks, Sky Blue is not out of the woods yet. Every game is essentially a must-win. Sky Blue does not have the tiebreaker advantage over any of the teams that currently sit ahead of them in the standings.

New Jersey can collect another 12 points for 41 points total. Sky Blue FC will have to match their best winning streak in program history to run the table. In a single season, the team has won five consecutive games twice (2013, 2014).  The 2014 winning streak carried into the first game of the 2015 season, making the club record for consecutive wins six games.

Despite the uphill climb, the players are stopping at nothing short of a top four finish.”Now that we’re headed to the end of the season and I see what this team can do, we’re going for [the] playoffs,” said Sheridan.

Richardson added, “Everyday at practice all of our mindset is on playoffs. We’re making a big push to get there and everything that we do matter on the way.” Sky Blue will travel to FC Kansas next Sunday before returning home to face Washington on September 10.