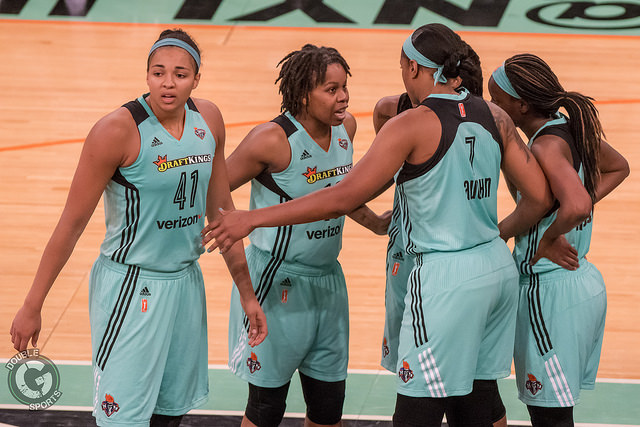 The New York Liberty  picked up its 3rd win in a row, defeating the Atlanta Dream 76-61 in its School Day Game presented by the NYC Department of Education on Wednesday afternoon at The Garden.

The Liberty Stayed The Course From Begin To End

The Liberty, who have won three straight, opened the game with seven unanswered points and never trailed. They pushed the lead to 47-29 by halftime before the Dream mounted a third-quarter comeback.

Atlanta cut its deficit to 10 heading into the final period but could get only within eight.  Sugar Rodgers had a great performance in front of the 14,000 plus fans in attendance. Rodgers had 16 points and was also 3-3 from the three point line.

Shavonte Zellous scored in double figures for the 3rd -straight game, finishing with 12 points. Tina Charles continued her stellar play as well, finishing with 18 points and 15 rebounds. It was Charles third double-double of the season.

Lindsay Allen continues to be a plus on a day where Bria Hartley did not play well, moving Laimbeer to use her for 23 minutes this time. Allen finished the game with six points, four assist and just two turnovers.

“It’s why we brought her back,” Laimbeer said, “She doesn’t turn the ball over, got us into things, plays dogged defense. I think she played well tonight.”

Liberty Out Muscled and Hustled The Dream On The Boards

The twin towers of Tina Charles and Kiah Stokes, just dominated the boards. Both combining for 32 of them team’s 48 rebounds. Stokes had a career high 17 rebounds in the win.

“Our coaches stress we have to box out and rebound to be a good defensive team,” Stokes said. “The fact Tina and I both had a lot shows how important we are to this team in rebounding. As long as we keep it up, we’ll be a good team.”

New York held Atlanta to just 27 percent shooting, including the Dream going 1-for-13 from behind the 3-point line.

“We got killed on the boards and when you can’t rebound you have less possession,” Atlanta center Elizabeth Williams said. “We didn’t shoot well, that was clear. When you’re not rebounding the ball, it’s hard.”

The Liberty concludes a 5-game home stand on Sunday, June 11, when it welcomes the Seattle Storm to Madison Square Garden. Tip off is scheduled for 3 PM. This will also be the Liberty’s first opportunity for some payback against Seattle, for that early season loss.