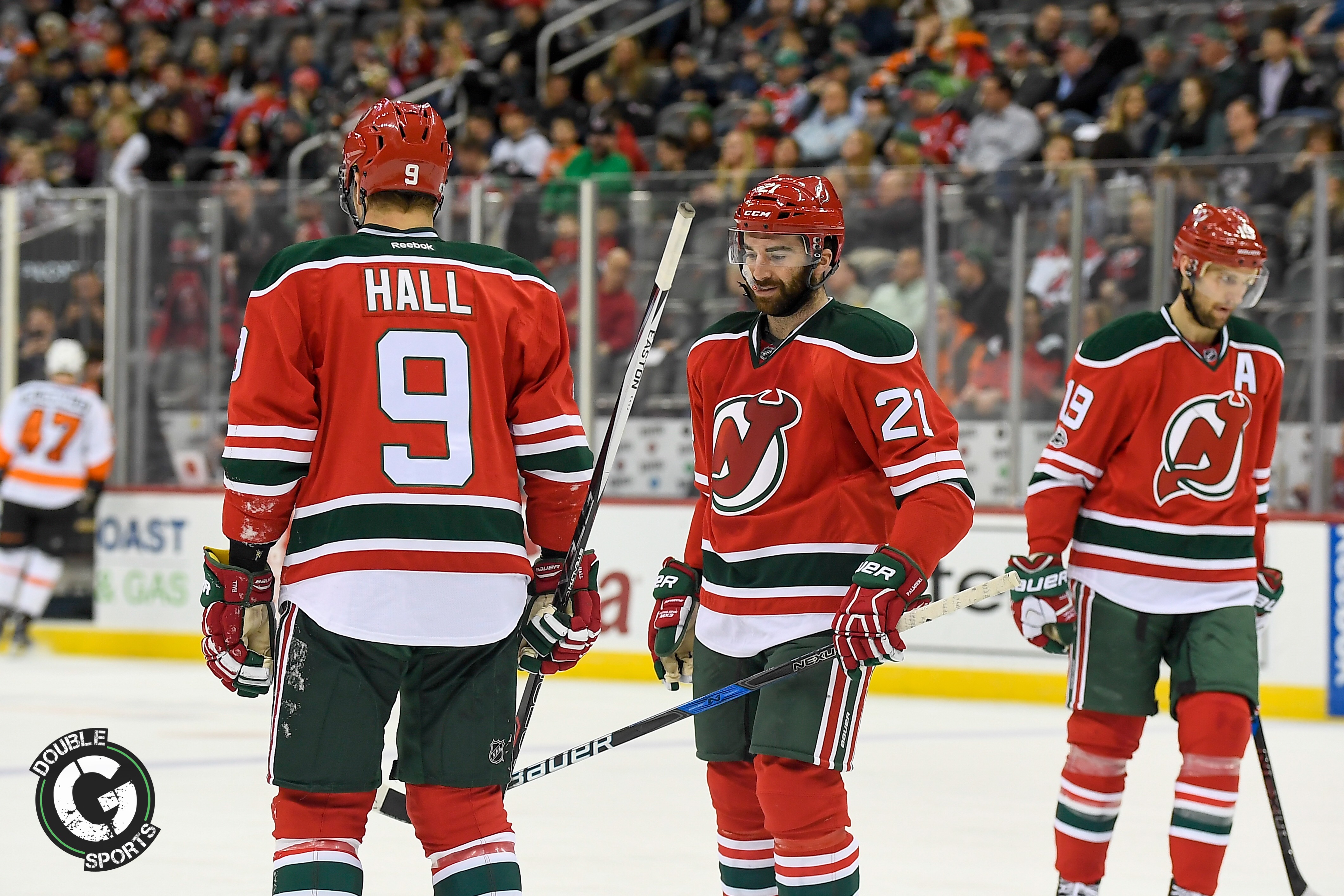 What’s Up With The New Jersey Devils This Year?

No one could have possibly predicted the New Jersey Devils would be tearing up the standings this season.

The New Jersey Devils are currently sitting in second place, but tied for first in the Metropolitan Division. They’re second overall in the Eastern Conference. This time last season, the wheels had begun to fall off and the Devils were hardly able to score goals, let alone win games.

We’re nearly to the midway point of the season. Shockingly, the Devils have managed to hold on to one of the top three seats in their division for the entire first-half of the season. Now, if we’re being honest, no one expected this.

It seems that the Devils had found true success early on with some unknown names that had taken everyone by surprise. Rookies Blake Coleman, Jesper Bratt and Brian Gibbons have more than made their presence known in New Jersey.

When you throw in the acquisition of University of Denver defenceman Will Butcher and 2017 first-overall draft pick Nico Hischier, the Devils have a solid core of young players who are passionate not only about the game that they play, but the crest on their chests.

While Zajac isn’t always putting up points, he’s been a key play-maker for the team, as well as their best center in the face-off circle. He’s good at being a defensive forward and was definitely a missing piece that the Devils needed. They didn’t let his absence stop them from utilizing their newer, younger players, however.

With Zajac out of the lineup, recovering from a pectoral surgery, players like Taylor Hall and Pavel Zacha stepped up and took leadership roles among the other players. Hall knew that more was expected out of him this season and he became a driving force behind the other forwards.

Zacha became a great role model and leader for the other young players. He spent all of his summer in New Jersey, hitting the gym and the practice rink most every single day. His hard work had shown true for the most part and the team’s missing pieces seemed to be less troubling.

However, as the season has progressed, the Devils have shown their fair share of concerning problems.

Pointless penalties have been a huge issue for the team. There  have been a lot of unnecessary slashing and tripping calls that have been made this year. For the most part, they’re coming from veterans who should know better, such as captain Andy Greene. The Devils’ defence has yet again all but disappeared. Second year Devils Ben Lovejoy and Dalton Prout have been a big source of defence woe this year. While Lovejoy has had moments of promise, they’re usually short-lived. Prout hasn’t really been given as many chances as Lovejoy, but that would be because unlike Lovejoy, he has shown no signs of improvement.

Then we have the problem (?) with Damon Severson. At one point, Severson was the Devils’ most promising young d-man. Whether it be from picking up bad habits and not letting them go, or poor defensive coaching or a combination of the two, his play has greatly suffered over the last few seasons. It feels as though Severson signed his new contract with the team this off-season and then decided that he was comfortable in his game.

When Severson pays closer attention to where he is in relation to both the puck and the Devils’ net, he makes smarter moves and better plays. It just feels like he’s lost, sometimes. He looks like he may not know where he is.
With better defensive coaching, Severson could very easily flourish. Especially when paired with Greene or the Devils’ newest d-man, Sami Vatenen.

Now, I’m still very unsure of what to make out about Vatenen. I’ve seen him make very smart moves in front of the Devils net, but I’ve also yet to see any productivity out of him. I’m not thoroughly convinced that the Henrique and Blandisi trade was worth it, but I’m a firm believer that only time will tell. Vatenen has still been less hazardous than Lovejoy and Prout, so I’ll take it for now.

Injuries are another huge concern for the Devils.

The two constants you can always seem to count on with the 2017-2018 New Jersey Devils is that Kyle Palmieri and/or Marcus Johansson will be injured. Palmieri is currently out with the same injury that saw him benched last season: a broken foot. Meanwhile, Johansson’s current injury is a bruised ankle.

The Devils are also missing young d-man Mirco Mueller, who had shown great promise before being placed on IR with a broken clavicle. It seems that the Devils are always missing at least two players at any given time, due to injury.

That being said, the biggest blow to the team as of late is the loss of Taylor Hall.

He went down early in the third period of Tuesday night’s 5-1 win against the LA Kings from a knee-to-knee hit. Thankfully, no major damage was done and Hall is listed as day-to-day with a knee contusion. He’s already begun skating, but he’s already missed two games.

The Devils clearly struggled without Hall against Montreal, but seemed to have found somewhat of a groove against Dallas. They leaned heavily on 6’6″, 240lb center Brian Boyle. Boyle helped push the Devils to the finish-line of a 5-2 win with 2g-1a against the Stars on Friday night.

Not to mention, Boyle racked up a hefty 12 PIM, to help get the boys going and keep their steam.

All it can take is one bad game to set the tone of a month’s worth of games.

The Devils have been very solid this year when it comes to not letting themselves stay in too big of a rut. Once they lose a game, the boys have typically found a way to pull themselves back up out of the dirt and carry on to find a win, the following game.

My biggest concerns for the Devils right now are their aforementioned lack of defense and their overabundance of injuries. If they can keep leaning on players like Gibbons, Bratt, Butcher and Coleman to make smart plays as well as put up points, than players like Zacha, Zajac, Hischier, Boyle and Santini can continue to make great defensive efforts and leave the rest to Schneider.

If this team can keep up their speed and hockey smarts while battling through all of their injuries and defensive weaknesses, then they will continue to be a force to be reckoned with and I have no doubt that they’ll make it far into the season. Maybe they’ll even have a decent shot at making the post-season.

The Devils are back in action in Newark on Monday, December 18 when Adam Henrique comes back to New Jersey with the Anaheim Ducks for the first time. Puck drops at 7pm.