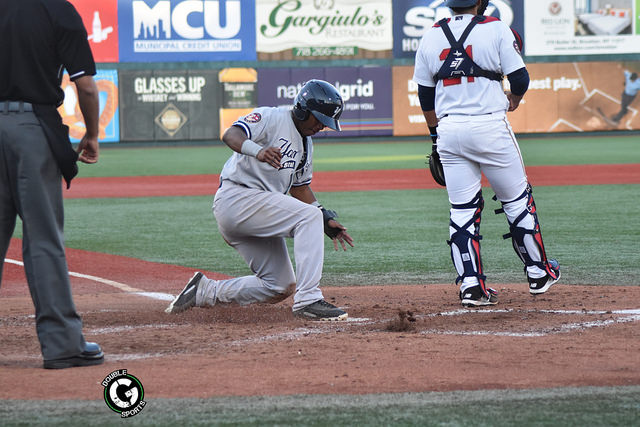 After being rained out on Sunday, the Brooklyn Cyclones opened their 2017 season against their rivals across the Verazzano Bridge, the Staten Island Yankees. Cyclones fell to the hated Staten island Yankees 7–4 at MCU Park on Opening Night Tuesday.

“Simon did a pretty good job,” Cyclones manager Edgardo Alfonzo said in his post game assessment of the young pitcher. “He did what was expected, he gave us a pretty good chance.”

The Cyclones scored three runs in the bottom half of the inning, taking Simon off the hook for the loss. It was a night of adjustments for the young hurler but he indicated in Sunday’s presser that drastically overhauling his style will not happen.

Down 7–4 in the sixth, Josa Maria had a chance to put the Cyclones back in the game when he came to bat with the bases loaded and one out. Swinging at the first pitch, the 22-year-old grounded to Yankee starter Jorge Guzman who fired the ball home to start a 1–2–3 double play.

It wasn’t Maria’s only rally killer. In the third, he followed an Ian Strom single with a grounded to short that was turned into two outs, and in the fourth, his grounded to short with runners on first and second ended a three-run rally.

Cyclones rookie manager, Edgardo Alfonzo said first-game jitters may have played a role in the loss.

“It’s Opening Day in New York,” he said. “The guys want to come in here and show what they got and sometimes it doesn’t work that way.”

“As a manager, you want to win,” Alfonzo admitted this weekend as the Cyclones met the local media for the first time in advance of their 17th season in Coney Island. “You also want to develop guys in pressure situations. This is a good place to do that.”

The Cyclones now hit the road to face the Vermont Lake Monsters for a three-game set before returning home on Saturday.

The Mets purchased the contract of LHP Gunnar Kines from the Schaumburg Boomers of the independent Frontier League on Tuesday. Kines was assigned to Brooklyn and will make his debut on Saturday at home versus the Hudson Valley Renegades.