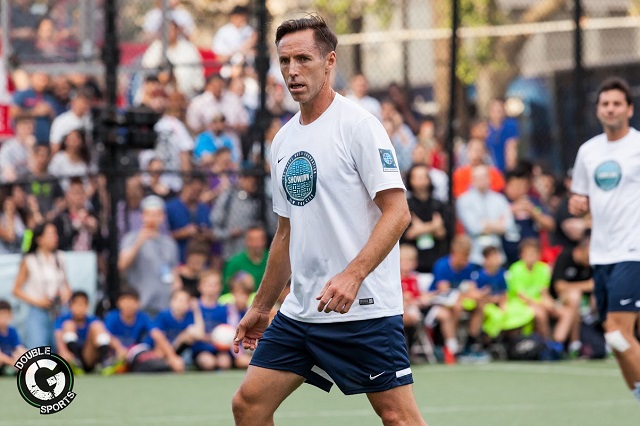 NYC’s Sara D. Roosevelt Park on the LES was bumpin’ last night for the 9th annual Steve Nash Foundation Showdown! This event is a friendly but competitive, quick-paced soccer match between current and former professional soccer players and current and past NBA players, most notably Steve Nash himself; two-time NBA MVP back in his prime.

The Steve Nash Foundation is a registered Canadian private charity and a US 501(c) charity, operating as two separate foundations. Both are dedicated to underserving children and assisting them in their health, education, personal development, and enjoyment of life. The Foundation uses its resources to implement strategies to empower communities.

This year’s Showdown was special. In addition to Sportscaster Spero Dedes as annual MC, Ted Lasso, British Premiere League’s Tottenham Hotspurs former “coach”, made his US coaching debut at the Showdown, running the sidelines for the home team. If you’re unaware of the history of Lasso with football (soccer) and his short stint with NBC Sports, check it out here and here. To make sure Lasso’s coaching cues were heard properly and effectively by his players, the Foundation made sure to give him a microphone for the game in its entirely. As expected hilarity ensued. This made for a more interactive game experience for the audience and VIPs, as Lasso also shouted comments to them.

I got a chance to speak with Lasso prior to the match, just to see exactly how he was going to motivate his team, being it had been 3 years since the home team has won the Showdown. “Lot of screaming, lot of yelling, screaming, yelling. Also, uh, I have spoken to a majority of their parents, you know, so hopefully their parents said hey, Coach Lasso wants you to do a good job. You get down into who we all were as teenagers, when we were our most impressionable. Also, you just yell ‘kick it’ a lot, and they have a tendency to follow your lead. That’s what I found in my short time coaching soccer.” This was all said in his heavy, southern, authentic Texas accent.

Nash addressed everyone in attendance just prior to kickoff, “It’s an honor for us to be able to do this for the ninth year, couldn’t do it without your support. Not only from fans and sponsors, but also from the players. We don’t have a game if these guys don’t take time out of their busy schedule to come and commit to our foundation and this community, and help to put on a show for you guys. Thank you for making this a special event and for allowing to do this for nine years. Hopefully it will be the best one ever, and we’ll do it again next year!” 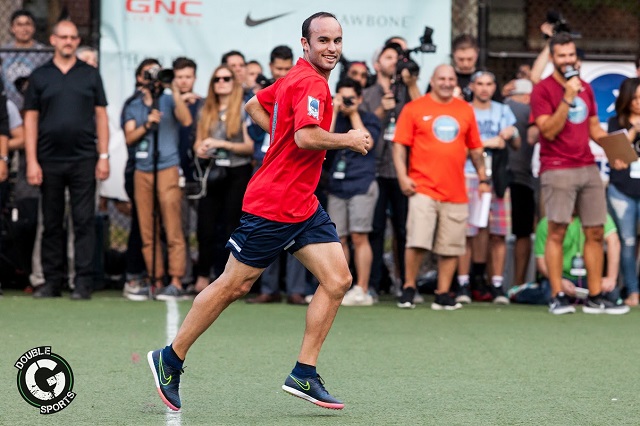 Aside from all the jokes and laughs, which there were plenty, we saw some great soccer from the likes of formers pro players Landon Donovan and Kyle Martino, current players Salomon Kalou, Massimo Gobbi, Georgios Semaras, Asmir Begovic (this years Showdown MVP presented with a Tag Heuer watch), and former MVP Guiseppe Rossi. Notable NBA players participating and in attendance were Rondae Hollis-Jefferson of the Brooklyn Nets, Bismack Biyombo of the Toronto Raptors, and Kevin Durant of the Oklahoma City Thunder, who didn’t play in the match. Biyombo had an outstanding performance, scoring four goals in the Team Nash 11-5 win over Team Donovan. Hollis-Jefferson didn’t disappoint either, showcasing some gymnastic skills on the field post-score for Team Donovan.

During halftime, Rossi and Nash tackled a juggle “Don’t Crack Under Pressure” challenge, where they were able to raise $10,000 for the foundation by completing five unbroken minutes juggling the soccer ball at mid-field.

Overall, this yearly staple on the Lower East Side did not disappoint. Sponsors GNC, Titan Tea, NBA Cares, NYCFC, Tag Heuer, Jawbone, Nike, MLS, Phebe’s Tavern and Grill, Tabl’eau, and KICK showed tremendous participation in the Fan Fest prior and through the event in its entirety.

Was this the best Showdown in Steve Nash Foundation history?! The event seems to age like fine wine, it just gets better and better