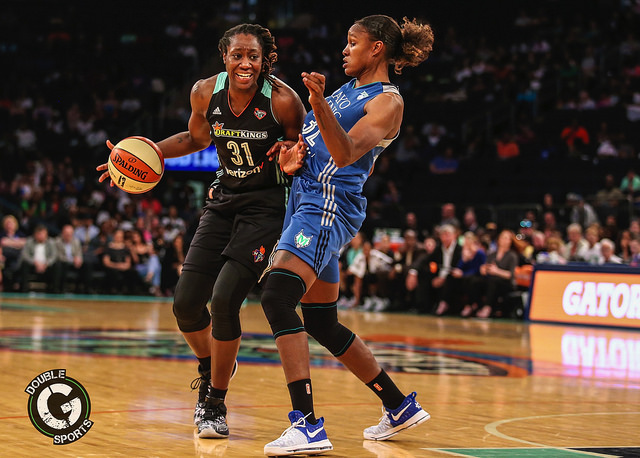 New York Liberty forward Tina Charles has been selected as a 2017 WNBA All-Star, joining the list of 10 players selected by fans, WNBA players and media to start in Verizon WNBA All-Star 2017.  The game will be played on Saturday, July 22, at Key Arena in Seattle.

For Charles, it is the third time in her career she has been voted as a starter for the Eastern Conference, and she receives her fifth overall All-Star selection. She has had a stellar first half of the WNBA season, ranking third in the league in scoring (20.8 ppg) and rebounding (9.1 rpg).

“I am grateful to all of the fans, media, and my peers in the WNBA who voted,” Charles said Tuesday. “I am excited to represent the New York Liberty organization for what I know will be a great All-Star Weekend in Seattle.”

“No player in the WNBA works harder or means more to their team than Tina Charles, and I congratulate her on being voted a starter for the All-Star game,” said Liberty coach Bill Laimbeer, who will coach the East team. “She is the most consistent player in the league, turning in close to a double-double every time she steps on the court, and has taken her game to another level this season as she leads our team every night.”

The Rest Of The Eastern All Stars

In addition to Charles, the Eastern Conference starting frontcourt includes Elena Delle Donne of the Washington Mystics and Jonquel Jones of the Connecticut Sun. Atlanta’s Tiffany Hayes and Connecticut’s Jasmine Thomas, both first-time All-Stars, will start in the backcourt.

WNBA Fans Are Starting To Show Out

Fans accounted for 50 percent of the vote to determine the starters for Verizon WNBA All-Star 2017, while current players and a media panel accounted for 25 percent each.  Fans cast 604,680 votes, more than double the number in 2015 (280,670).  No All-Star Game was held in 2016 due to the Summer Olympics. With the league performing better now, fans seem to be starting to gain more interest in the WNBA product.