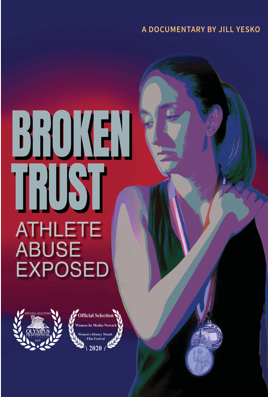 The side of sports that gets the least amount of light.

I think most of us are blind to the realities of athlete abuse. It’s a hush-hush topic. That’s how it has always been. Unless a case has enough traction to reach a national audience, like the Larry Nassar case, we don’t hear about it.

Nassar served as the USA Gymnastics team doctor and was convicted of sexually abusing over 250 girls and young women, among other charges in 2017.

But Jill Yesko is combats this in one of her newest documentaries.

“Broken Trust: Athlete Abuse Exposed” digs deep into athlete abuse cases, uncovering reasons why athletes and parents stay silent. The film spotlights a handful of athletes who dissect their abuse stories and why some of them chose to stay silent or confide in someone.

Craig Maurizi gets candid and raw in this film. Maurizi is now a coach after being an Olympic hopeful in his skating career. His story is the most shocking to me, my mouth agape the moment he begins to speak. His abuser was his former coach Richard Callaghan. Callaghan still coaches young skaters today. That is mind-blowing.

Although most athletes featured in Broken Trust have since spoken out about their abuse, little has been done by national governing bodies to ensure protection and safety of athletes. This documentary brings forth the brokenness of the system.

Broken Trust is available to rent as an educational tool and is also available for theatrical screenings. Visit www.brokentrustfilm.com for more information.

There is a long road ahead for the issue of abuse in athletes to become obsolete. But the more we know, the more we can fix the seemingly systemic problem.

What Would Shortened MLB Season Look Like For Yankees?
Nassau Coliseum to shutter indefinitely