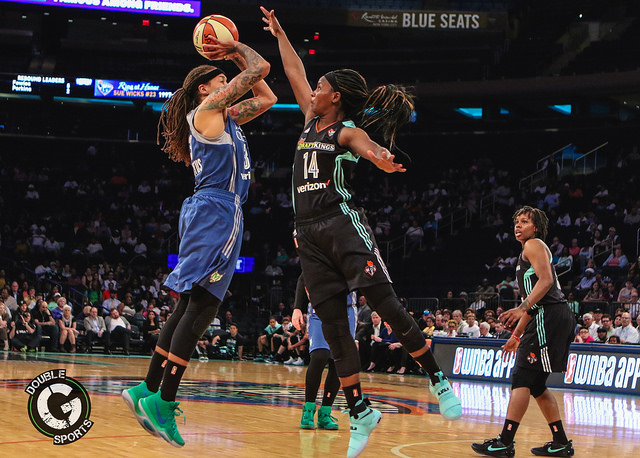 In all likelihood, the New Yok Liberty have literally weathered the early season storm and are hitting their stride at the right time.  Tina Charles and Sugar Rodgers both scored 21 points as the New York Liberty (6-3) picked up its 4th consecutive victory, outlasting the Seattle Storm (5-4) 94-86 at Madison Square Garden on Sunday Afternoon.

“We were just able to get defensive stops at the end, we still have a lot of things to work on,” Rodgers said. “We just have to work on the little things like offensive rebounding and boxing out. Just little key things that will get us to the playoffs and to a championship.”

The Liberty led by as many as 12 points in the 1st half after jumping out to an 11-2 lead, but took just a 43-40 advantage into the half, in a game that saw 10 ties and 8 lead changes over the final 16:33. New York sealed the win with key plays down the stretch.

A Kiah Stokes offensive putback put the Liberty up 87-84 with 1:14 to play, and on the ensuring Seattle possession, Rodgers intercepted a Jewell Loyd inbounds pass before dishing to Shavonte Zellous on the break for an easy bucket and a 5-point cushion with just 50.2 remaining.

“Her primary goal is to play defense and rebound, “ Laimbeer said about Kiah Stokes. “I expect a double-double damn near every night because she plays the majority of the minutes.”

Shavonte Zellous chipped in with 16 points, including a crucial layup with 50 seconds left that gave the Liberty an 89-84 lead and some breathing room. The Liberty (6-3) avenged a May 26 loss that Zellous took personally when Seattle rookie Sami Whitcomb torched New York for 22 points. Zellous vowed to not let that happen on Sunday. Sami Whitcomb was held to  just 5 points. Stewart led the way for the Storm, with 23 points and 10 rebounds. Bird added 21 points and 10 assists and Loyd chipped in 19 points.

Liberty Continues To Dominate The Boards

A common theme in any of the Liberty’s wins, is their presence on the glass. Prior to Sunday’s game, the Liberty had averaged 42.3 rebounds per game in their previous three contests and out rebounded their opponents twice. Although they didn’t reach their 42.3 average, the Liberty did secure 39 rebounds and beat the Storm in that category by four.

Rookie Nayo Raincock-Ekunwe scored in double figures for the 1st time in her career finishing with a season-high 10 points and 6 rebounds off the bench. Just the 3rd Liberty reserve to score in double figures this season. New York is now 4-0 since Epiphanny Prince and Kia Vaugh left to compete in the 2017 Eurobasket Women Tournament in the Czech Republic. The way the team is playing , imagine what the team will look like when their floor general and another offensive weapon returns soon. Look out WNBA, the Liberty are coming.

Next Up For Liberty

The Liberty returns to action at Connecticut on Wednesday, June 14. Tipoff at Mohegan Sun Arena is at 7 PM.