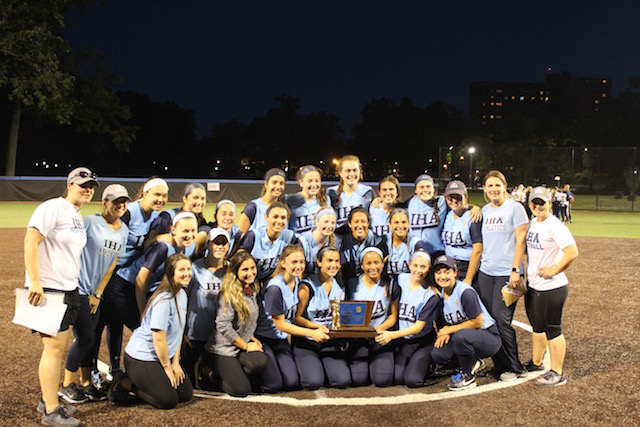 Trailing 4-3 after a massive two-run homer in the sixth by Lodi Immaculate right fielder Kayla Robert, the Immaculate Heart Academy Blue Wolves were down to their last last two outs in the Tournament of Champions final at Ivy Hill Park on the campus of Seton Hall University and possibility of season ending.  Senior centerfielder Reese Guevarra made sure that scenario would not occur stroking a single to left field.

“I knew it was my last game and high school career at bat and leave it out all on the field,” said Reese Guevarra.”I knew this group was very resilient, came together and went into the dugout saying we didn’t come this far to have our season end like this and work until the every pitch, zone in and do this together.”

Second baseman Sonia Sharma stepped up next and dropped down a bunt but Blue Wolves first baseman Ali Moran threw the ball past first allowing Guevarra and Sharma to advance to second and third base. With Reagan Jones up at the plate, Lodi Immaculate starter Caylee English uncorked a wild pitch enabling Guevarra to score from 3rd tying the game up at 4-4 and sending it into extra innings.

“They never say no and die and that is the IHA way,” said head coach Diana Fasano. “We’re the home team and get the bottom of the inning and try to use it. The pressure was on them and let’s go out there and win it. Reese with over 200 career hits and a big time athlete and of there is anybody I want up in that situation it’s her and anyone in the state would have to agree with that.”

“Olivia (Sprofera) battled and got hit but big outs when she needed to and kept us in the game and that’s what Olivia does and she doesn’t get rattled and this is a team sport.”

In the top of the 8th, the Blue Eagles had runners on first and second with two outs but IHA starter Olivia Sprofera (7 strikeouts) managed to escape the jam getting Ashley Callahan to pop out to second base. English retired the first 2 outs in the bottom half of the frame only to see sophomore catcher Mia Recenello stride to the plate and belt a double to the wall in center field.

That set the stage for senior right fielder Caroline Ventor, lacing a single into shallow left-center field that brought in Recenello for the game-winning run and setting off a euphoric celebration in the infield. With the walk-off win, IHA (30-4) earned the number one overall ranking in New Jersey.

“I just wanted to do this for my team and make solid contact as I got behind in the count and make the next pitch count,” Ventor said “We knew coming in IC had some great hitters so we planned on playing solid defense and punch back when they hit. Everyone worked collectively as a team and got runners on and in.”

“He (Anthony LaRezza) was with us the whole time and always pushing for this,” Fasano said. “This is so special and we definitely got outhit by a lot but stayed in it. We did what we had to focus on and play small ball. I felt calm in extra innings and feel good we’re hitting and let’s do it. With two outs we get a double and Caroline comes up with two strikes.”

“It feels great ending on a high note and making history,” Guevarra said. “We have been through so much together with this group, especially the seniors and emotional. The atmosphere was tense in extra innings and so excited for Caroline (Vector) and way to end her high school career with a clutch hit and so proud of  her and worked so hard for this and watched her grow and develop as a player and in the outfield with her all the time.”

“It came down to the final out and we came out on top and found a way to win. It’s amazing and can’t believe my high school career is over with and went by so fast. We’re the number one team in New Jersey, just not Non-Public A but number one team in New Jersey and means so much to me and we worked for this and results showed and so proud of my team.”