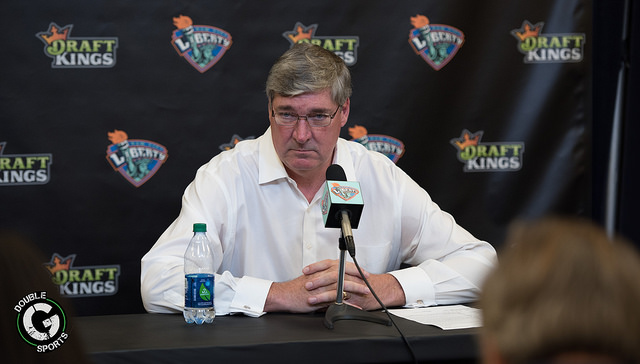 The New York Liberty entered the 2017 season with high expectations. Championship or bust, that’s the goal. So it makes sense that Liberty coach Bill Laimbeer would be upset following a 73-64 win at home in the season opener on Saturday.

The Liberty, was facing a San Antonio team that was missing it’s starting backcourt, including top draft pick Kelsey Plum, who sprained her right ankle last week. She was still in a walking boot and the team is hopeful she’ll be back soon. San Antonio also was missing Moriah Jefferson. The No. 2 pick in last season’s draft was sidelined with right knee soreness.

”I hope this is the worst game we play all year. It was awful,” Laimbeer  said. “We didn’t execute the things we were supposed to. We didn’t box out, gave up way too many offensive rebounds. Missed free throws all over the place. … Collectively top to bottom I thought this was about as worse an effort they could have put forth and I told them so in very strong language.”

Laimbeer then laid into his bench for not being able to extend the lead and forcing him to put star Tina Charles back into the game down the stretch. Laimbeer said he hopes to play Charles less this year, but needs production elsewhere for that to happen.

“Our starters didn’t play great but, however, we got a lead. We should extend that lead with our bench. Collectively, top to bottom i think this was about as worse an effort as we could have put forth tonight. And I told them so. In very strong language.”

Tina Charles, who finished with 12 points and seven rebounds, wasn’t surprised by the harsh message. She and her teammates knew Saturday was rough, regardless of the win.

“It’s very concerning. It’s very alarming,” she said. “I mean, we’ve been in training camp since April 23. We know what each other can do. We’ve played against practice guys who are stronger and quicker. We’ve been able to prove it there. It’s a choice, fighting through fatigue.”

Well Balance Game For The Liberty

Tina Charles led all Liberty players with 12 points and seven rebounds, while Epiphany Prince added 11 points, along with three rebounds, two assists, and two steals. Shavonte Zellous, Brittany Boyd, and Cierra Burdock each finished with 10 points in the win. As a team, NY shot 26-for-61 or 42.6 percent, while also out-rebounding their opponents 36-33.

The Liberty’s Defense Is What Got Them The Win

The Stars shot just 38.3 percent from the floor for the game, going 23-of-60. In addition, they hit just one of five three-point shots, which saw them finish at a dismal rate of just 20 percent from downtown. Monique Currie had 23 points to lead the Stars and Isabelle Harrison added 15.

The game marked the head coaching debut of Vickie Johnson, who started her career in New York as a player when the WNBA debuted in 1997. She spent nine years in New York before going to San Antonio as a player. A member of the Liberty’s Ring of Honor, she still ranks as the franchise’s all-time leader in points (3,246), rebounds (1,053) and games played (282).

The Liberty organization gave a beautiful video tribute to Vickie Johnson during the second quarter. Vickie received a standing ovation from the Garden faithfuls, shorty there after.

“It was amazing,” Johnson said afterward. “This is where I started at, you know? I played a lot of games in the Garden and played hard. I think I played the right way. I think the fans and the organization appreciate that.”

The Liberty returns to action on Thursday, when they host the Minnesota Lynx.