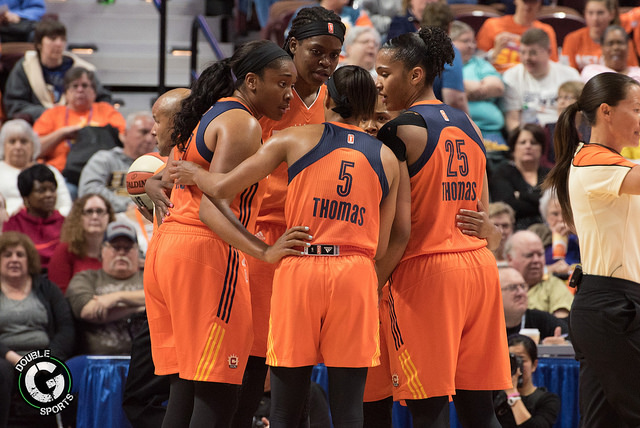 After dropping the first four games of the season, the Connecticut Sun picked up the first win of the season, beating the Chicago Sky 97-79.  Despite early foul trouble, Jonquel Jones was the player of the game, topping her night off with a 23-point, 21-rebound game.

The second year product from George Washington University is the fourth player in franchise history to record a 20-20 game, it is also the 17th 20-20 game in WNBA history.

For head coach Curt Miller, Sunday was a definitive result for things his young squad has been working on all season, “[It’s] a little bit of a monkey off our backs,” said Miller post game, “we were in the first three games of the year [with] under three minutes to go and couldn’t get to the finish line. So, we knew how important this three game road trip is.”  Such was not the case against Chicago.

Additionally, the Sun tightened up from the free throw line, going 71.8% from the line.  In the first four games, the Sun were outscored by 46 points in free throws alone. Sunday, guards Jasmine Thomas, Alex Bentley and Rachel Banham were perfect from the line, collecting nine of the 28 made free throws on the night.

The Sun continue a long stretch on the road before heading home to Mohegan Sun on Saturday, June 10th against Atlanta. Fans can watch the Sun face-off against the Washington Mystics this Wednesday, and Saturday against the San Antonio Stars.  Both games will be made available on WNBA League Pass.