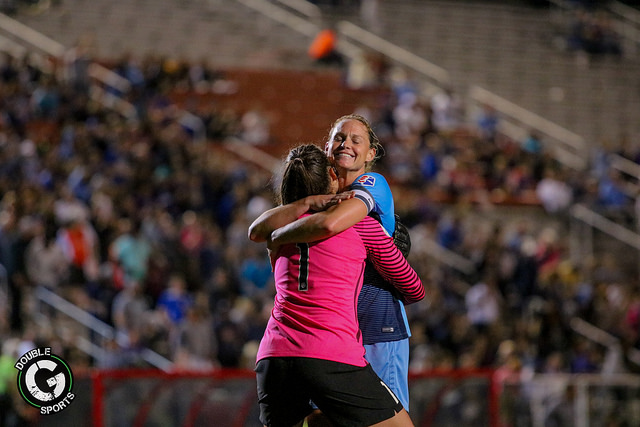 Sky Blue FC managed to grab three points against Orlando Pride, on a dramatic yet historic night for the New Jersey team in front of a crowd of more than 3400 spectators.

The New Jersey locals did not get to start the first half as they expected. Orlando Pride dominated most of it, with an early goal at the 18’ minute by Jasmyne Spencer. Sky Blue FC fought back and created a couple of opportunities for the offense. The equalizer came at the 43rd minute after a dispossession by Raquel Rodriguez in the midfield, that finds Daphne Corboz. Corboz dribbled through the middle of two defenders to connect with Sam Kerr, who is able to put the ball in the back of the net and sends the game to the halftime with a tie. Kerr is now tied with Nadia Nadim for most goals in franchise history (13 goals).

The second half was more favorable for the locals, who showed a better organized back line, and more precise passing. Christie Pearce was outstanding in the back, as always, and was able to stop the Brazilian legend, Marta, from executing and creating opportunities.

The game winning goal came at the 82nd minute after a pass from Sam Kerr connected with Maya Hayes.  The Penn State alumna juked by the defense to confront Orlando’s goalkeeper, Aubrey Bledsoe one-on-one play.  “It’s like I saw it in slow motion, to be honest,” said Hayes, who got the start on Saturday. “I knew where I was going and I was already in there, and I knew exactly where I wanted to go with it. But it was literally in slow motion.”

Sky Blue FC maintained their winning streak at home this season, with a 3-0 record. Sky Blue improves to 4-3-1 (13 points) on the season, good enough for third place behind the Chicago Stars. This is so far, the best home record in franchise history.  Orlando falls to 1-3-3 (6 points).

After the game, Orlando defender Ali Krieger expressed disappointment, “We’re good enough to be in a better place than we’re right now on the table. It’s just unfortunate, it’s frustrating because we know we are good enough. We just gotta produce the results.”  Again, Orlando was unable to maintain a lead, or the tie to walk away with at least a point.  However, despite the disappointment, Krieger knows the Pride must overcome the current rut as a unit, “We win as a team and we lose as a team but we’re gonna figure out those little details. We’re gonna stop giving the ball away in tough places on the field because teams will counter on that.”

The long-time US National Team defender also added that she was not connected about her omission from the upcoming USA roster, “I’m always honored to play for my country and I’ll be prepared when [Jill Ellis] calls on me again … until then, I’m focused on this team and I’m focused on Orlando Pride and helping this team succeed.”

Given this team played three games in seven days, head coach Christy Holly was very pleased to grab six points in three tries, “I have nothing but pure admiration for every player. Not just on the field tonight, but [through] this whole process.” With that said, he knows the team is far from their performance ceiling, “We still have a long way to go. We still have a lot of growing to do.”

For Hayes, the team is headed in the right direction, “I think our work ethic and our effort tonight was top class. The first half was a little up and down for us, but we went into the locker room, we regrouped. We knew we were not out of it, especially after getting that equalizer for halftime, that was really good. We came out and we stuck to the game plan.”

Orlando hopes to reunite with the win column next week when they host Boston.  Sky Blue FC will look to defend the home field against Nadia Nadim and the Portland Thorns next Saturday.  Both games will be live streamed on Go90.