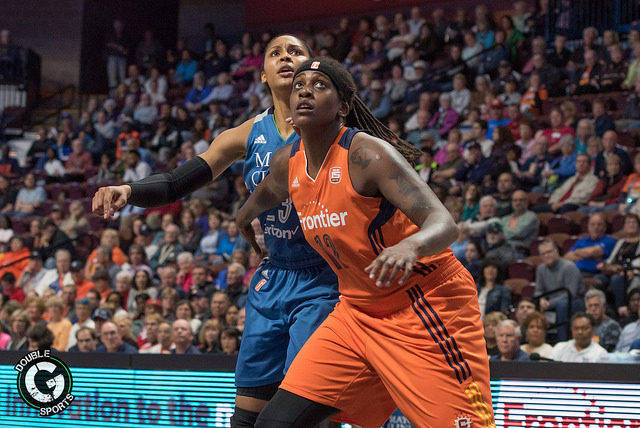 The Sun defeated three-time WNBA champions 98-93 in what may be the upset of the season.  Coming into Saturday’s game, Cheryl Reeve and the Lynx were a perfect 9-0 and on track to repeat their 10-0 run from last season.  With the win over Minnesota, the Sun are now 5-5 and in good position early to be one of the top eight teams come the 2017 playoffs.

Sun Head coach Curt Miller and his team collected a fourth straight win on Saturday. The wins of the Atlanta Dream (104-71) and the New York Liberty (96-76) were rather convincing. Two teams that we got swept by last year, Atlanta and New York, turned into two big wins to stops two long losing streaks against both teams,” said Miller after the win over New York.  “I am really pleased with how we have played these last five games, and I want to keep the momentum going.”

Sun enter Friday’s game against the Liberty with another win and and five days rest.

Jasmine Thomas and Alyssa Thomas posted season-highs of 20 points against the Lynx on Saturday night. Alyssa Thomas notched her 1,000th career point against the Lynx, and recorded another career-best eight assists. Jonquel Jones, who finished with 16 points on the night.  She sank two critical free throws with 6.4 seconds left to ensure the win.

Rachel Banham secured a season-high 11 points for the second consecutive game, while Courtney Williams had 12 and Shekinna Stricklen added 13 for the Sun. The team also posted season bests in shots from the field (55.4%, 41-of-74),  26 assists, and 10 three-pointers (for the third time in 2017).

Double G Sports will have coverage later this week  when the Sun look to take down the Liberty at Madison Square Garden. Game time is set for Friday, June 23rd at 7:30 p.m.