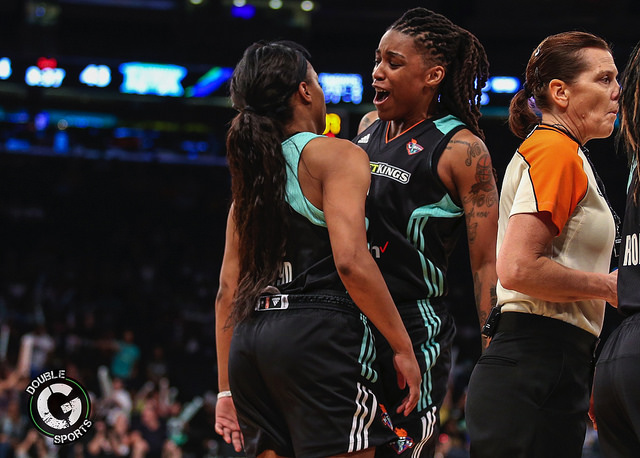 Epiphanny Prince hit a go-ahead jumper with 4.5 seconds left and Sugar Rodgers blocked Leilani Mitchell on a drive to the basket just before the buzzer as the Liberty held off the Phoenix Mercury, 69-67, for their first road win of the season.

Epiphanny Prince made her first start for New York since game three of the 2015 Eastern Conference Finals. Prince finished with 24 points, her most in a regular season game since scoring 30 at Chicago on Aug. 7, 2015. That was also the last time Prince hit four 3-pointers in a game.

Tina Charles finished with 22 points and 10 rebounds for her first double-double of the year. It was the 130th of her career, the second most in WNBA history.

The Liberty out rebounded the Mercury 37-28.  New York committed 17 turnovers, compared to the Mercury only committing 10. The turnovers will be something Coach Laimbeer will continue to emphasize going forward.

The Mercury  struggled offensively for much of the game without star Diana Taurasi. She was serving a one-game suspension for a level two flagrant foul in Friday’s game against San Antonio.  Brittney Griner led Phoenix with 19 points and six blocks, in 37 minutes of work.

Brittany Boyd Officially Out For The Season

New York Liberty point guard Brittany Boyd will miss the remainder of the 2017 season, the team announced on Wednesday.

Boyd tore her left Achilles tendon in the Liberty’s game against the Minnesota Lynx last Thursday. In the fourth quarter, Boyd took a misstep and fell to the floor, where she then limped off the court.

On Monday, the team said she underwent successful surgery to repair her tendon, but that a full recovery will take 9-12 months.

The Liberty continue their road trip into Seattle to take on the Storm on Friday night. Tip off is scheduled for 10 PM (ET).