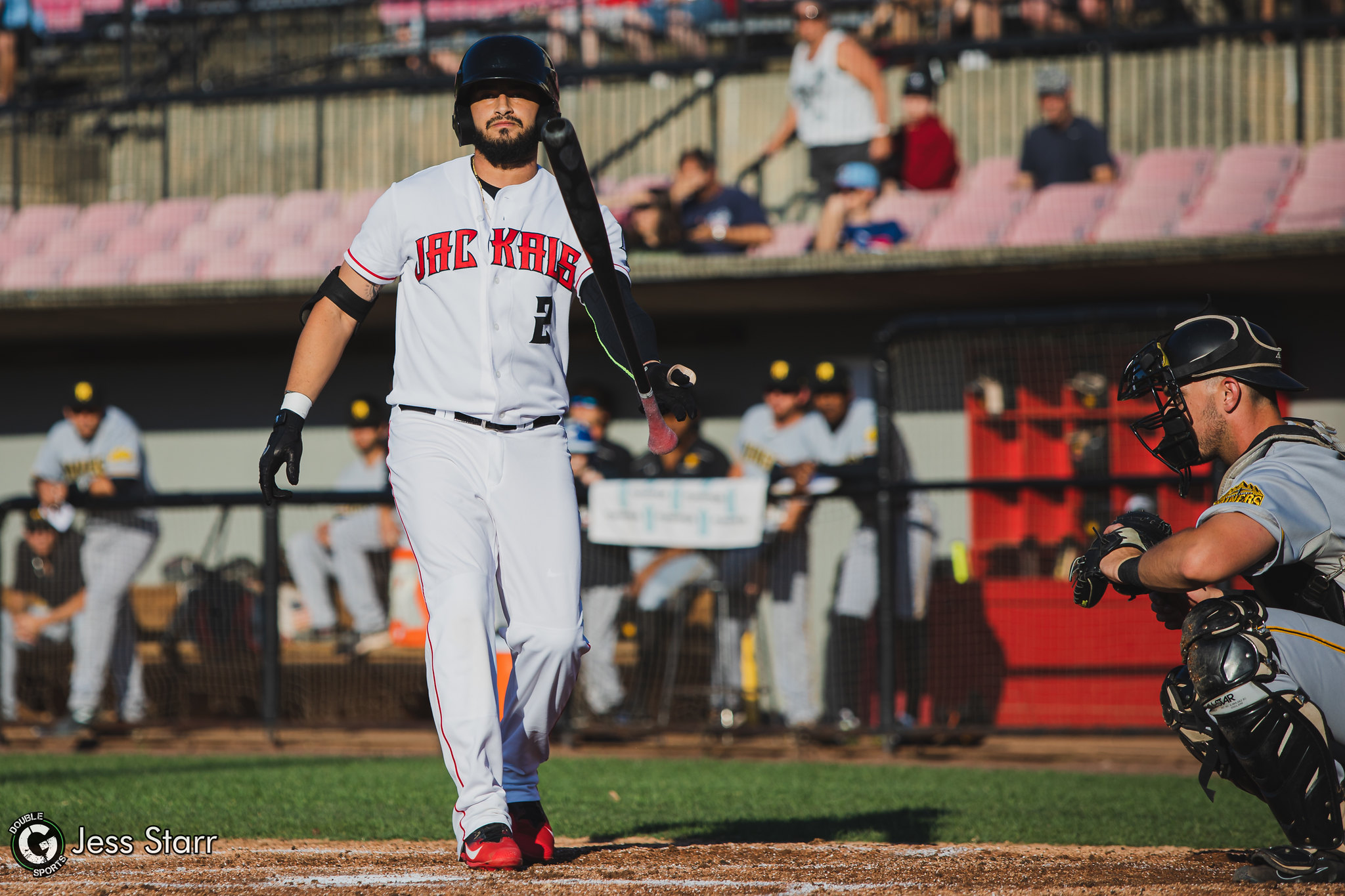 The New Jersey Jackals have been scorching hot to begin the month of August, winning nine of their last 11 games, including taking two out of three at home against the first place Sussex County Miners.

The New Jersey Jackals have been on fire for the past week and a half. New Jersey is 9-2 in their last 11 games. In that timeframe, New Jersey swept a three game road and home series against the Rockland Boulders, swept three games at home over the Ottawa Champions, and split a two game road series against Rockland. And just recently, the Jackals took two games out of three at home against the first place Sussex County Miners.

This series in particular meant more for New Jersey that just a series down the stretch of the season in August. As this series would mark the return of Jackals All-Star outfielder Jay Gonzalez. Gonzalez was out since July 1 dealing with injury as well as playing in the Pan Am games in Puerto Rico. Gonzalez missed 28 games in that span.

“It feels great to be back,” said Jay Gonzalez. “I miss being around my guys. I spent the first half with them. A little lonesome but I’m back and ready to play.”. Gonzalez went on to describe how much playing in the Pan Am games meant to him, saying “It was absolutely unreal. Something I hold very close to my heart. Something that we did for Puerto Rico. First time Puerto Rico’s won gold in the Pan Am games so it’s top-three best moments in my entire life.”.

Getting Jay Gonzalez back is huge for the Jackals lineup as their lineup is now fully healthy. They have plenty of impact players that they began the season with in Gonzalez, Santiago Chirino, Conrad Gregor, Alfredo Marte, and Richard Stock. As the icing on the cake, since the beginning of the season, they’ve added David Harris, Nelson Ward, and Isaac Wenrich to the mix. New Jersey Jackals manager Brooks Carey says he’s very impressed with the group of guys he has in the lineup.

“This is the best lineup I’ve put together in probably the last 15 years,” said Brooks Carey. “I can’t put together a better offensive lineup than this. So I sit back and watch them swing the bat and play. It’s what I do.”.

The Jackals began the first game of the doubleheader on Aug. 9 failing to get the big hits with runners in scoring position. Jay Gonzalez drew a leadoff walk and stole second base in the top of the first. Unfortunately, the Jackals flied out in back to back at-bats, failing to score Gonzalez. David Harris gave the Jackals another chance with a one-out double. But once again, New Jersey flied out in back to back at-bats, stranding Harris at second base.

New Jersey’s fortunes with runners in scoring position would change in the bottom of the fourth. With two outs in the inning, David Harris and Richard Stock got the rally started with back to back singles. The Jackals would go on to score three runs in the inning off a single by Jason Agreski, single by Isaac Wenrich, and double by Jay Gonzalez. Nelson Ward added another run in the bottom of the fifth with a solo home run to right field. Starting pitcher Brendan Butler was excellent on the mound, pitching seven scoreless innings while striking out eight. New Jersey would have everything they would need for a 4-0 victory in a seven-inning contest.

Unlike the first game, the Jackals got it going early and never looked back in the second game of the doubleheader. David Harris got it started with a two run single in the first. The big blow, however, came off the bat of Alfredo Marte, a bases-clearing three run double in the second. Harris followed Marte’s big hit with a big hit of his own, an opposite-field two run home run, his second of the season. David Harris’s bat has been on fire since signing back with the Jackals on July 23. In 59 at-bats in 17 games, he has 20 RBIs to go along with a .475 batting average, .537 on-base percentage, .644 slugging percentage for a 1.181 OPS. The Jackals would go on to dominate the Miners by a final score of 10-1.

“My dude it feels great man just to be back on the baseball field,” said David Harris. “Being between those diamonds man, it just feels like my sanctuary man. I’m able to be myself. Be basically who you want and to go out there, not be on the couch anymore but out there between the lines and play with the baseball again.”.

Sussex County got on the board first courtesy of a triple off the bat of Mikey Reynolds in the top of the sixth. However, New Jersey would end up getting the run back in the bottom of the seventh. David Harris lead the inning off with a single. The Jackals then send Demetrius Moorer in to pinch-run. Moorer stole second base, took third on an error, and scored on a single by Jason Agresti to tie the game up at 1-1.

Unfortunately for New Jersey, they would end up surrendering the lead right back in the top of the eighth when Trey Hair hit a sacrifice fly to score Mikey Reynolds, giving the Miners the lead back. In the bottom of the ninth, the Jackals would have the game-tying run at second base with two outs with Jay Gonzalez at the plate. However, Gonzalez struck out and the Jackals lost the game by a final of 2-1.

“We’re gonna go through another tough stretch before the season’s over,” said Brooks Carey. “But the more we win now, we can weather the storm and get the to playoffs and set this thing up. We’re gonna be in pretty good shape.”.

The New Jersey Jackals stand with a record of 40-33, third place in the Can-Am league standings. New Jersey is currently 4.5 games back behind the Trois-Rivières Aigles and three full games up on the Rockland Boulders. The Jackals will now go on an eight game road trip, starting with one game against the Sussex County Miners on Sunday, Aug. 11, a four game series against the Québec Capitales beginning Monday, Aug. 12, then wrapping up with a three games series against the Ottawa Champions beginning Friday, Aug. 16.