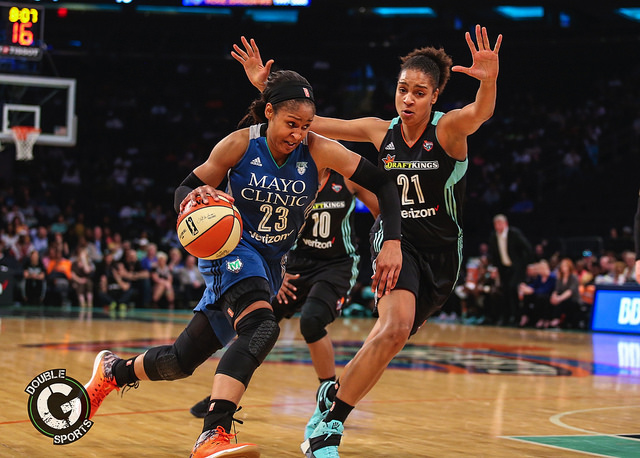 Maya Moore posted a double-double with 16 points and 11 rebounds, as the Minnesota Lynx surged ahead late in the third quarter and rolled to a 90-71 rout of the New York Liberty on Thursday night.  New York has won four of the last six match-ups, but even with it being coach Bill Laimbeer’s birthday and cheering fans, the Liberty was unable to pull out a win.

“We didn’t execute appropriately, we have to be more disciplined and we weren’t tonight,” said Coach Bill Laimbeer. “Too many mistakes, too many missed assignments. I didn’t know what to expect. I think I’ll know more after game 4. We’re definitely a work in process.”

After trailing by as many as 11 in the first half, the Liberty closed to within 43-40 at the half, and regained the lead 45-43, only to see the Lynx answer with an 8-0 run to retake the lead for good. All five starters finished in double figures for Minnesota, led by Moore. Minnesota Lynx reminded everyone of why they came within a single point of a fourth WNBA championship in six years with a dominant fourth quarter performance. Moore was four assist away from a triple double.

“I always try to find ways to impact the game. Sometimes it happens in 40 minutes, sometimes 10 – I’m always ready to make plays,” Moore said. “I don’t always measure my success by points. I’m not super concerned as long as the team flows.”

Sugar Rodgers scored 20 points for the Liberty and added seven rebounds. She scored 19 by halftime but missed all three shot attempts in the second half. Brittany Boyd added 16 but exited the game with about five minutes remaining due to an ankle injury. Tina Charles played through an illness and did not score until the third quarter. She finished with six points on 2-of-9 shooting.  Charles was held to single-digit scoring for the first time since June 7 of last season, when the Sparks held her to just seven points.

Up Next For The Liberty