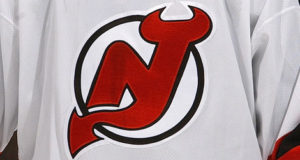 The New Jersey Devils have  solidified their blue-line for the next few years on Saturday by resigning restricted free agent defenseman, Adam Larsson, to a six year 25 million dollar contract.

The 22 year old defenseman had been scheduled to have an arbitration hearing on Wednesday July 29, if a deal couldn’t have been worked out. Earlier this week General Manager, Ray Shero, was confident both sides were going to be able to reach an agreement on a new contract.

Larsson, who was selected fourth overall in the 2011 NHL Entry Draft by the Devils, led the team’s defenseman in points, with 24 and assists, 21, in 65 games this past season. The previous two seasons were spent splitting his time between the big club and the Albany Devils of the American Hockey League. His rookie season in 2011-2012 was spent all in New Jersey putting up two goals and 18 assists through 65 games.

Prior to joining the Devils organization, the Skelleftea, Sweden native spent two seasons with his hometown club, Skelleftea AIK of the Swedish Hockey League.