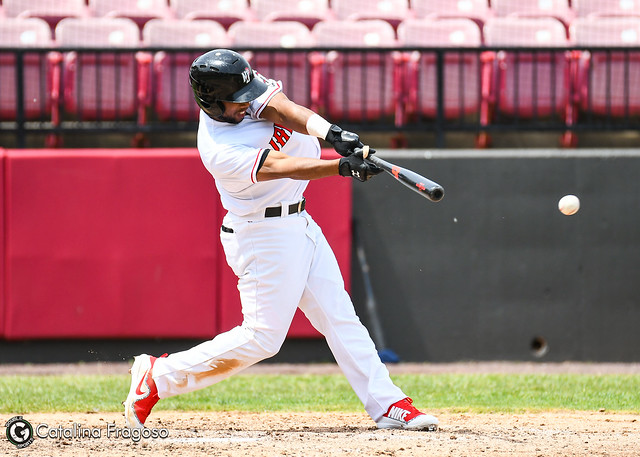 After hitting a bit of a rough stretch, the New Jersey Jackals have begun to turn the corner, sweeping a doubleheader against the Ottawa Champions to give them their third straight series win.

Throughout this past week, the New Jersey Jackals have been looking to turn the corner. After a five game winning streak to begin the first homestand of the season, the Jackals lost three straight series. However, they would get a major momentum boost after winning a three game series on the road against the Rockland Boulders. Now returning back home to Yogi Berra Stadium, they ended up winning a three game series against the Ottawa Champions.

The first game was supposed to be played on June 18, however, Mother Nature had other ideas and the gamed ended up being rained out. This forced both teams to play a doubleheader on June 19. Can Am League rules force doubleheaders to be seven inning games rather than nine. New Jersey Jackals manager Brooks Carey talked about how different it is managing seven innings as opposed to nine.

The Champions would add two more runs of their own in the top of the fifth, one by a solo home run off the bat of Vincent Gugliett.  But it wouldn’t be enough to make a comeback. Thanks to 2 2/3 innings pitched by Reece Karalus and Dylan Brammer out of the bullpen, the Jackals were able to secure the 3-2 victory.

The second game featured more of the same low scoring throughout the majority of the contest. Emilio Guerrero scored twice, one in the second on an error and the second in the fourth on a wild pitch. Jackals starting pitcher Eduard Reyes had another outstanding night on the mound. He pitched 7 shutout innings while striking out five for his first shutout of the season. It’s his sixth straight start allowing two runs or less as his ERA currently stands at a remarkable 1.45.

“He’s as good a pitcher that this league has right now,” Brooks Carey said regarding his starting pitcher. “He throws a strike when he needs it and throws it to the spot that he wants to.”

In the bottom of the sixth inning, the Jackals would end up blowing the doors wide open, scoring five total runs. The big blow came off the bat of Alfredo Marte, who hit a bases-clearing, three-run double. He went 2-for-4 with three RBIs on the day. New Jersey would go on to win by a lopsided final of 7-0.

The series would conclude in the third and final game on June 20. This time, it would be a full nine inning game as the Jackals would go for the sweep. Unfortunately, the Champions had other plans, as they came out swinging right out of the gate with three runs in the first inning. Leonardo Reginatto drove in one with a single while Jordan Caillouet brought in two with a double as Ottawa took a 3-0 lead.

Jackals shortstop, Santiago Chirino, had a rough game both in the field and at the plate. He went 0-for-5 on the day, and is now 8-for-42 (.190) in his last. He came to bat at the bottom of the fifth when the Jackals had the bases loaded with two outs, but ultimately flied out to right field. In the top of the seventh, he fielded a ground ball and attempted to turn a double play, but threw the ball wild. The Champions scored two more runs on the error and four runs in the inning and the Jackals ending up losing the series finale 8-1.

The New Jersey Jackals stand with a record of 16-14, tied for second place with the Rockland Boulders in the Can-Am League standings. They will begin a three game series against the Shikoku Island League All Stars at home on Friday, June 21.