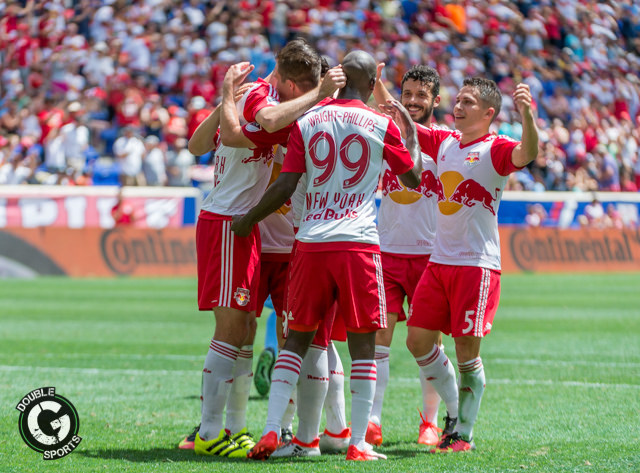 Jesse Marsch, conducting his first press conference of the year, made it clear early on what he was at Red Bull Arena to do.

“Right now, I’m focusing on [CONCACAF] Champions League and our season coming ahead,” he said, “so I’m not going to answer any questions about Ali [Curtis] — or Dax [McCarty].”

He already clarified that Denis Hamlett, rumored to be Curtis’ replacement as Sporting Director, was still a member of the coaching staff, but that was all Marsch had to say about a major departure from the team. Marsch set the tone for not just his press conference, but for the New York Red Bulls Media Day, where he and his players discussed preparation for the team’s crucial Champions League quarterfinal on Wednesday against the Vancouver Whitecaps, a formation change, and trying to build the best roster possible.

One of the bigger talking points of the afternoon was about preseason, shorter than usual with the team beginning play a week and a half before everyone else in Major League Soccer. “It’s a little bit of a strange moment that we’re in right now because we have such a big match coming up and in many ways,” Marsch said, “we don’t feel totally prepared because the last four weeks have gone by quick.” The team was hardly at full strength for much of preseason, which took place mostly in Tucson, Arizona: Sacha Kljestan and Luis Robles were with the US men’s national team until early February; Kljestan and Bradley Wright-Phillips missed time awaiting the arrival of babies; Damien Perrinelle had visa issues delay his return to the team; and Mike Grella and Alex Muyl picked up injuries along the way. “They’re not all totally fit, and they’re not all totally sharp,” Marsch added, “so I know it won’t be our best match that we’ve ever played,” but they are all available for selection.

The players also remarked on the imperfect preseason, with defender Justin Bilyeu saying it was “definitely a lot different than last year, but it’s been good because we’ve been able to get going right away and get into games right away.” Felipe spoke about the additional work the players had to do in the offseason, saying, “I think we trained so hard in the offseason. We had programs to follow, and I think most of the guys — I think every guy — showed up very fit.” Muyl focused on the nature of the “condensed” preseason, saying, “We had to be on top of the pacing of it, because we want to make sure we’re getting as fit as possible as quick as possible.” All were positive, though, about how prepared the team is heading into the match against Vancouver.

Despite his late arrival, Perrinelle had few complaints, saying, “Usually, preseason is too long.” He also remarked that the little turnover in the squad has helped in this quicker preseason: “The good thing is, we almost have the same group, the same starters mostly. When we have to talk about all the tactic things, I think almost everybody is on the same page.”

Grella emphasized the importance of the opponent: “We got really fortunate drawing Vancouver, not because they’re a bad team — they’re a very good team — but because they’re in the same stage of preparation as us, and I think we’ll both be equally prepared, which is not at the best we’ll be right now. I sure you’ll see five, six, seven, maybe 10 games in, you’ll see us at our peak, but we are very prepared right now, as much as we can be.”

A change in formation

Marsch highlighted the change to a two-striker formation that he’s featured in preseason and expects to be the way the team sets up for the season. “I think what it does, more than anything, it means that our first line of pressure is a little bit more aggressive,” Marsch said. “It means that the way it connects with the players behind them means that we can be a little bit more compact.”

On who will slot next to Bradley Wright-Phillips, Marsch said Gonzalo Verón will do that, but Kljestan may take on that role, as well. Despite the changing role, Kljestan does not think it will be too different from last year. “I think, even if he plays me up top with Bradley Wright-Phillips, it’ll still look a lot like last year,” Kljestan said. “While I’ll be coming more underneath to get the ball and Bradley will be making more runs . . . Jesse could put me anywhere on the field and I think I’ll still be able to make plays to help my team win the game.”

In the last week, the Red Bulls named Kljestan the club captain following the departure of Dax McCarty. On making the decision, Marsch said, “It almost wasn’t a choice at all. . . . I don’t really think it’s going to take that much of an adjustment for him. The players already all look to him, he has such a quiet confidence and ease.” Marsch added, “He makes people around him better by how he plays on the field, but also how he treats them and how he interacts with them in their personal lives.”

Kljestan expressed gratitude and pride about the captaincy, saying, “I just feel proud to represent Jesse and the coaching staff, to represent every member of this club that works for the New York Red Bulls, and most importantly represent the fans in a way that they’ll be proud of.” He feels he’s already been a good leader to the group, saying “I think I’ve been able to have a good way of knowing when to pat a guy on his back and knowing when to kick a guy in his ass when he needs to be kicked.”

He noted that Robles and Wright-Phillips will help him in leadership capacities, as will Sean Davis. “We’ve got a thing called the Leadership Council where we’ve got six of us that are kind of like the leaders of the team, the captains of the team,” Kljestan said. “ We added Sean Davis to that group this year because we think he’s a big part of what we’re doing, and we kind of call him the leader of the rookies, so he’s kind of like my translator to the rookies.”

The Red Bulls signed two Homegrown players this offseason, signed some of the New York Red Bulls II players to first team contracts, and made younger additions to the roster, meaning there are a lot of young players competing for limited minutes. “The more success we can have in Champions League, the more we can rotate our roster a little bit and give some of our younger players opportunities in league matches,” Marsch said. He’s already given the promotion to Bilyeu and Aaron Long, players who spent the last year with New York Red Bulls II and may start on Wednesday. Marsch also name dropped Derrick Etienne, Brandon Allen, and Ryan Meara and hoping to reward them for their “absolutely fantastic USL seasons,” and giving them bigger challenges.

Sal Zizzo, the right back

About a year and a half ago, Marsch made the decision to make lifelong midfielder Sal Zizzo a right back, and he spent the entirety of last season there. “2016 was kind of up and down for me,” Zizzo said. “I had some good times and some bad times, but I learned a lot, and I feel like I’ve really gotten that invaluable experience at the position.” Despite his versatility, he believes he will be a right back for the foreseeable future: “Right now, I think right back is where I belong and probably where I fit in best.”

After being asked about a favorite position on the field, Zizzo said, “Right now, I’ve enjoyed playing right back and learning that side of the ball and trying something new. My whole life, I was an attacking player, so switching it up a little bit has been a fun experience.”

Perrinelle and Aurélien Collin, regular center back partners over the last year, both hail from Paris, France, which the two players have enjoyed. “It’s very nice having a friend from your city,” Collin said. Perrinelle elaborated, saying, “That’s funny, because we, the team, are the New York Red Bulls, [but] there are a lot of French guys, and a lot of times, that was the center back,” referencing former Red Bulls center back and Frenchman Ronald Zubar. Perrinelle, though, said the two do not speak French too often on the field. “When we’re on the field sometimes, we speak French with each other, with communication it’s quicker, but most of the time, we have not to talk too much because we are the same pedigrees, so we know what the other one is going to do, so we can anticipate.”

That does not mean some other teammates do not notice the French speaking duo. Bilyeu, who cited Perrinelle as someone he’s looked up to, said, “Sometimes I feel like, they’re talking in French, and I’m like, ‘What are you guys saying?’ . . . It won’t stop being hilarious.”