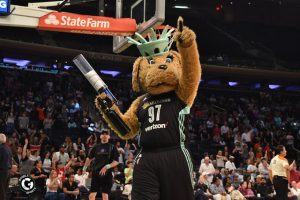 NEW YORK —  Coming off of a five-game road trip, the New York Liberty seems to have found their championship level, intensity and drive. The Liberty (17-12) extended its winning streak to five and clinched a 2017 WNBA Playoff berth with a 70-61 win over the Minnesota Lynx (22-6) on Sunday afternoon.

Tina Charles led the Liberty with 19 points and nine rebounds, and Epiphanny Prince scored 15 points.  Minnesota was missing two injured starters, point guard Lindsay Whalen and forward Rebekkah Brunson. But even without them, the Lynx scored 111 points and beat Indiana by 59 on Friday night.

The Liberty Are Playoff Bound Again

New York is headed to the postseason for the 3rd-straight season, and is currently riding a season-long winning streak, having defeated the top three teams in the league standings in succession to move up to 4th place.

New York finds themselves peaking in August, something they’ve made a priority after ranking number one in the league last year and falling off down the stretch.

“Making the playoffs? It doesn’t mean a damn thing,” Liberty coach Bill Laimbeer said Sunday after his team did just that with a 70-61 victory over the Minnesota Lynx at the Garden. “We were expecting to make the playoffs . . . Big deal. There are bigger things out there.”

The Liberty led 47-46 with nine minutes left. Then Bria Hartley drove for a basket, Prince hit a three-pointer, Charles canned a hook shot, Kia Vaughn delivered a three-point play, Charles drilled a three-pointer and Sugar Rodgers (10 points) made a layup. That produced a 62-48 lead with 3:38 left. “The energy and the defense,” Rodgers said of the keys to the victory.

The Defense Was Impressive As Usual

The Liberty held a Lynx team that usually shoots 47% to a dismal 34% from the field. Most importantly, New York limited Sylvia Fowles’ impact on the game as she managed only seven points.

“I think the biggest key was our bigs and the help we gave on Sylvia Fowles tonight,” said Coach Laimbeer. “We didn’t let her dominate the game inside. We kept this team on the perimeter today.”

The 61 points scored by the Lynx tied a season low, which Minnesota scored two games ago against Seattle.

Charles opened her week with team highs of 24 points and seven rebounds in an 82-70 win at Connecticut on Aug. 18, while helping limit the Sun’s Jonquel Jones to 11 points. Two days later, Charles paced the Liberty with 19 points and nine rebounds as New York defeated the league-leading Minnesota Lynx, 70-61.

Next Up For The Red-Hot Liberty

The Liberty returns to action on Wednesday evening on the road against the Indiana Fever. Tipoff is scheduled for 7:00p.m.

Three Reasons Lebron James WILL Leave Cleveland After this Season
Knicks Lose Out on Kyrie Irving as Guard Heads to Celtics
Posting....