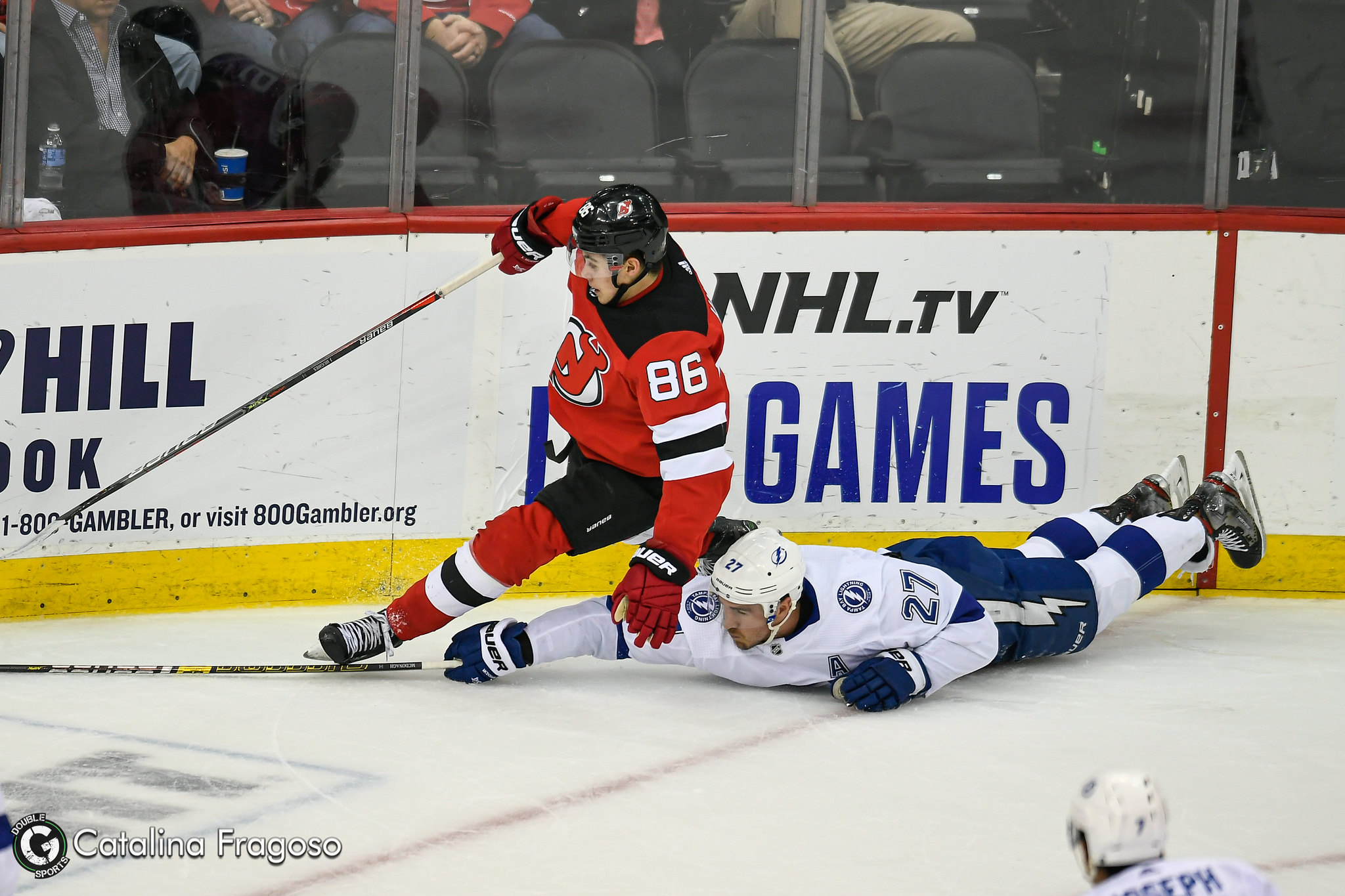 Scary and Spooky Hockey: The Devils on the Night Before Halloween

The Prudential Center was very spooky on the eve of Halloween.

Not ghost or goblin spooky. I’m talking “the devil” type scary. Six goals scored for New Jersey’s team, but that did not secure a win. That’s scary, a bit wild, and also very unsettling. The game was fast and sloppy. What (or who) took over the Rock last night?!

Before last night’s matchup the Devils played only one game in the previous 10 days, an early season rest, recovery, repeat if you will. During this stretch they practiced, worked on various tactics, and mixed up some line combinations. Everyone was eager to get back to game day. There was, and still is, a desire to inch up the standings from dead last in the Metropolitan Division. The Devils have only 7 points in 10 games played. Last night did not aid in that effort, as the Devils secured only one of possible two points with the OT loss to the Tampa Bay Lightning.

Six pucks made their way past Lighting netminder, Curtis McElhinney, which clearly shows that something was working. It’s just that seven pucks made their way past Cory Schneider, so some things were also not working. But what? Why? Alternate Captain, Taylor Hall, said, “You can’t put it on the goalies at this point, there’s some weird stuff happening. We’re just going to keep working.”

Jesper Bratt, after being a healthy scratch the previous game against the Arizona Coyotes, returned to the lineup like his spot on the roster was not a guarantee. He played his heart out, scoring two goals in 15:35 time on the ice with five shots.

“Bratt was great. It’s nice to see him respond the way that he did,” Devils coach John Hynes commented post-game. “He was an impact player in the game. The Jesper Bratt that we saw tonight, that’s the guy we need. It’s really good to see him take the lesson of being scratched for what it was and come back and have a good performance.”

Kyle Palmieri scored his 4th, 5th, and team leading 6th goal on the season, tying the game up at 6 with 8 seconds left in regulation. Hats made their way from the crowd to the ice and the 13,152 fans in attendance went absolutely wild, as this entire game was a rollercoaster of emotions for the home crowd. If you looked away for three minutes you would miss something big. A goal. A penalty. A few extra words exchanged in front of the net. The entire evening you heard alternating chants of “Wooooooo!”, “Boooooooo!”, and “Let’s go Devils!”.

Hall touched on this in the locker room after the game. “We’re kind of battling our own fans right now. It’s a tie game, and we’re getting booed. That’s a tough environment to play in sometimes, especially when you’re at home.”

That’s never something that you, a player or a fan, want to happen.

The game was very much one sided, as neither the Devils’ defense or the Lightning’s defense decided to show up, hence a final score of 7-6. One of the newest additions to the Devils coming by trade this past summer from the Nashville Predators, P.K. Subban, said he personally played a terrible game, and maybe if he showed up to play the result would have been different.

Subban, post-game, was very frustrated. “I mean I am not pointing my finger at anyone else but myself. I have to be a lot better for my team and my teammates. There’s no excuse. We got a ton of rest this week. We haven’t played in a while so we should be fresh, sharp, and chomping at the bit. I just wasn’t hard enough in those areas. Turning pucks over, losing battles in front of the net. It’s just unacceptable. I pride myself in being a premiere player in the league, got to play better than that.”

It’s just one game, and as Hynes said yesterday, “You get into these situations and you don’t just pop out of it. Your game improves and your game improves, and if you look at the last two games we were certainly the better team in both, but we didn’t win. Tonight we took a step. You don’t come out of a rut and just go. You have to build it, you have to keep coming, and you have to play the right way.”

Can the Devils get their stride and figure out what the “right way” is for them?

Their next chance is Friday night at The Rock against a division rival in the Philadelphia Flyers. Will they build enough to get out of this rut?