You with me? Who, as an adult, would think otherwise? I certainly can’t imagine. However just in case some people need convincing, TopSpin Charity has got your back.

Founded in 2009 by Peter Farnsworth, TopSpin aims to provide necessary resources for underserved youth to succeed.

The way TopSpin started? As a solution to settle a debate between friends regarding Ping Pong supremacy. It was a big enough idea to throw a party for those in the sports, media, and entertainment industries where they raised money for “A Better Chance” charity. Since then, the annual Ping Pong tourney, which at the 2016 NYC party held on December 1st at Metropolitan Pavilion on West 18th Street had 20 tables plus a celebrity main table all set up for heated games of Ping Pong, has brought cities together with over 9,000 people, raising over 2.5 million dollars for 19 non-profit partners. 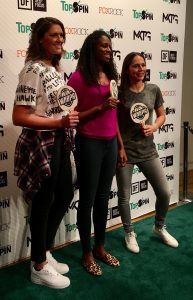 But how does TopSpin decide what non-profits to give their raised funding to? “We get approached by non-profits, but we look at it a couple ways. Great leadership, we make sure they have a tremendous leadership team and to make sure also they are the right size for us, that the amount of money we raise can really make an impact on their program.” Farsnworth said Thursday evening at the 2016 event. “A lot of the non-profits you see that we are involved with are small, and that’s by design.” 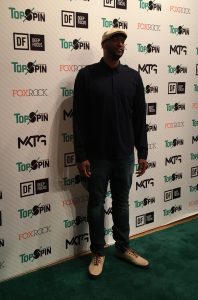 Athletes, celebs and media execs who have a voice and platform to spread the news about TopSpin within New York City and hopefully nationally arrived in style, walked the green carpet then mingled with party goers who were taking advantage of the open bar and 15 New York City restaurants that prepared their signature items for everyone to feast on all night long. Some played in the celebrity tournament, some opted out like New York Jets cornerback, Buster Skrine. “I am not good,” Skrine explained. “We have one in our locker room, I am one of the worst on the team!” What mattered? Skrine was there. He was using his New York athlete status to bring awareness to TopSpin. Retired athletes like former NBA stars John Wallace and Larry Johnson, musician Kevin Jonas, New York Knicks sideline reporter Rebecca Haarlow, WNBA stars Stefanie Dolson and Sue Bird, USA women’s soccer player Megan Rapinoe, and even Miss New York came, saw and conquered on the elevated celebrity table. 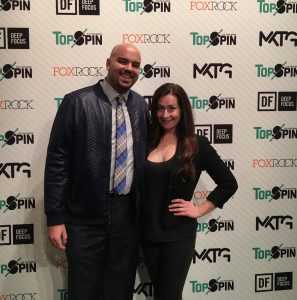 Fresh beats, fresh drinks, fresh photo booth branded TopSpin pics were happening all night in every corner of the beautiful space at the pavilion. No wonder the event gets larger with each passing year.

Even if you didn’t attend the event, you can always donate here.