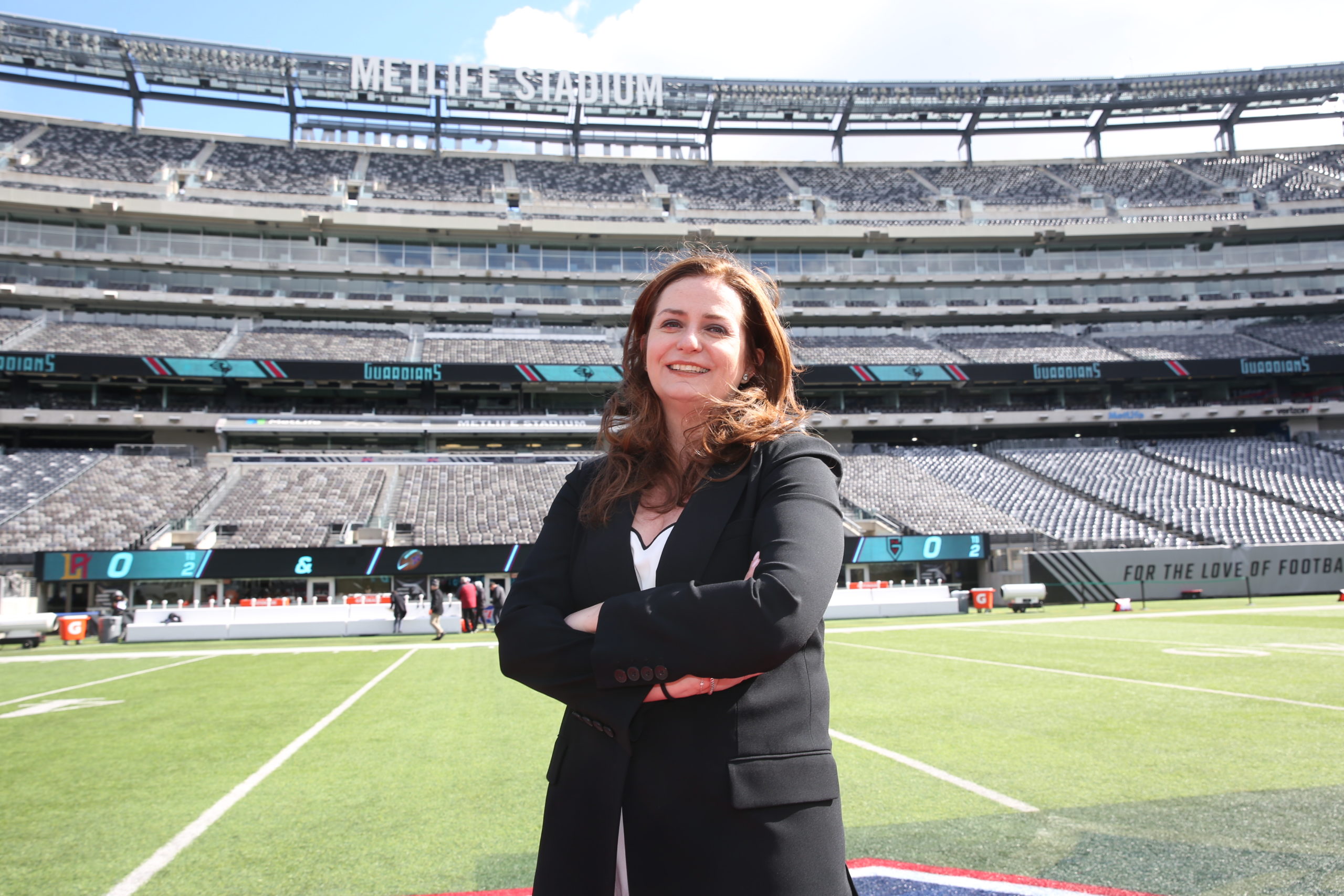 Janet Duch, is the President of the XFL football team in New York, the New York Guardians.

Duch served since 2016 as Senior Vice President of Marketing and Communications for On Location Experiences, a leading premium hospitality business. Prior to that she spent 18 years with Madison Square Garden. As Senior Vice President of both the New York Rangers and New York Knicks, she was a principal architect in developing and managing the brand identities of both teams and leading go-to-market ticketing and retention strategies, along with in-game entertainment, merchandise, community relations, and digital and fan engagement initiatives and programs.

Duch was named to the Sports Business Journal’s prestigious Forty Under 40 in 2015, the same year she was honored by Leaders in Sports as one of its Forty Under 40, Marketing & Communications.

Nick Durst, Double G Sports (DGS): Where did you grow up and what was your childhood like, did you play any sports?

Janet Duch (Duch): I was born in Brooklyn, raised in Bergen County, NJ. I’m first generation born here, my parents are from what was Czechoslovakia. For us,  my Dad was a big influence around sports. Sports is where my family came together. Growing up I played soccer, basketball, volleyball and a little bit of street hockey. I grew up on a block with like 21 boys haha.

DGS: Where did you go to college and what did you study?

Duch: I went to Paramus Catholic for High School and was a basketball and volleyball player there and was recruited by a lot of division one schools for both sports. I ended up attending the University of North Carolina at Chapel Hill on a volleyball scholarship.

DGS: What is your first sports memory?

Duch: The New York Rangers were always on in my house. Hockey being eastern european was part of our upbringing. I am going to out my whole family here but for the 1994 Stanley Cup parade my father took all of my family. My mother called my brother’s school to let them know that he would be missing his final to go to Manhattan to see the parade with his father.

DGS: Was there a particular moment when you realized you wanted to work in sports?

Duch: My junior year of college, I had a career ending injury, I had a stress fracture in my back. I had a hard time coping around the team. That is when I realized I wasn’t going to play my last year and that is when I realized I needed to channel my love of sports. I then worked with the sports marketing department, coached volleyball and worked on promotions and game presentation.

DGS: Where was your first internship?

Duch: I interned at the Women’s Sports Foundation my Junior year.

DGS: How did you end up working at Madison Square Garden?

Duch: Networking is a thing, it really is. A family friend of mine worked for the Devils and he tried to get me some interviews. He sent my resume over to the Rangers and I started as a game night staff person. That is how I got my foot into the door at Madison Square Garden. I started to network with full time staff and the New York Liberty were hiring a marketing assistant, it was their second season in the WNBA. I worked for them for six months and then went back to the Rangers in more of a community and fan development role in marketing and spent 18 amazing years at Madison Square Garden.

DGS: While working at MSG in marketing, what was the most challenging part about going from a traditional strategic planning approach to a more social and digital approach?

Duch: In 18 years there I saw the industry and the way fans consumed media change. Early on communication was done through mail, with the dynamic of social media it helps to amplify the teams message. It is a powerful tool to connect with and build a fanbase.

DGS: Have you ever had a moment where you had to pinch yourself and say I cannot believe I am working in sports?

Duch: Many moments with the Rangers. Retirement nights were special, Mark Messier, Mike Richer, Brian Leetch and Adam Graves. Certainly the Winter Classic in Philadelphia and the two stadium games I architected from the Rangers standpoint and Yankee stadium and the 2014 Stanley Cup run and the Guardians first game.

DGS: How did you get approached by the XFL to become President of the Guardians?

DGS: How did your time at NFL On Location Experiences prepare you for the XFL?

Duch: I was employee number six or seven there. So from a start up standpoint it was an opportunity to connect the dots and build a structure which has helped here at the XFL.

DGS: What excites you most about the XFL?

Duch: Lots of things. For me an opportunity to be part of a league that is looking to change the game and approach the industry differently. The opportunity to build a team from the ground up on the business has been really exciting. The approach to fans has always been at the center of my sole and being able to build a fan base is very exciting.

DGS: Have you met Vince McMahon and was he intimidating?

Duch: I met him once along with the other team Presidents in November and he had very good sound advice and guidance for us.

DGS: How has it been working with Coach Kevin Gilbride?

Duch: Incredible. He is such a legend. He comes to work everyday and he grinds it out. He has a vision and he is focused on putting a quality product on the field and also a culture that has inspired us here. He has been an incredible partner to collaborate with.

DGS: What was the whole process like for you of building a team and staff from the ground up?

Duch: It has been exhausting haha and amazing. We’ve done it all in ten quick months. The focus was finding a leadership team from this area that understood the market and media. The most exciting part has been developing my team. I am just overwhelmed with how the fans have accepted us. Their passion has been incredible, I think that is what is keeping us going, we want to co-create with the fans.

DGS: If the Guardians win the championship, will there be a ticker-tape parade down the Canyon of Heroes?

Duch: Haha, we are focused on one week at a time. There is a long season ahead of us.

DGS: Who are some of your favorite athletes to watch play?

Duch: Mark Messier. Getting to work with him has a special place. He redefines what a leader is. I was a big Steffi Graff fan and Michael Jordan growing up.

DGS: Outside of sports, what are your hobbies?

Duch: I love to cook, run, kick box and do pilates. Right now though, just friends and family.

DGS: What would you say to someone who asked you for the blueprint to get a job working in sports?

Duch: I’ve been speaking on a lot of university panels and seminars about this lately. Networking and finding a foot in are key. Be passionate about what path you want. Pursue your dreams and find yourself a good mentor.