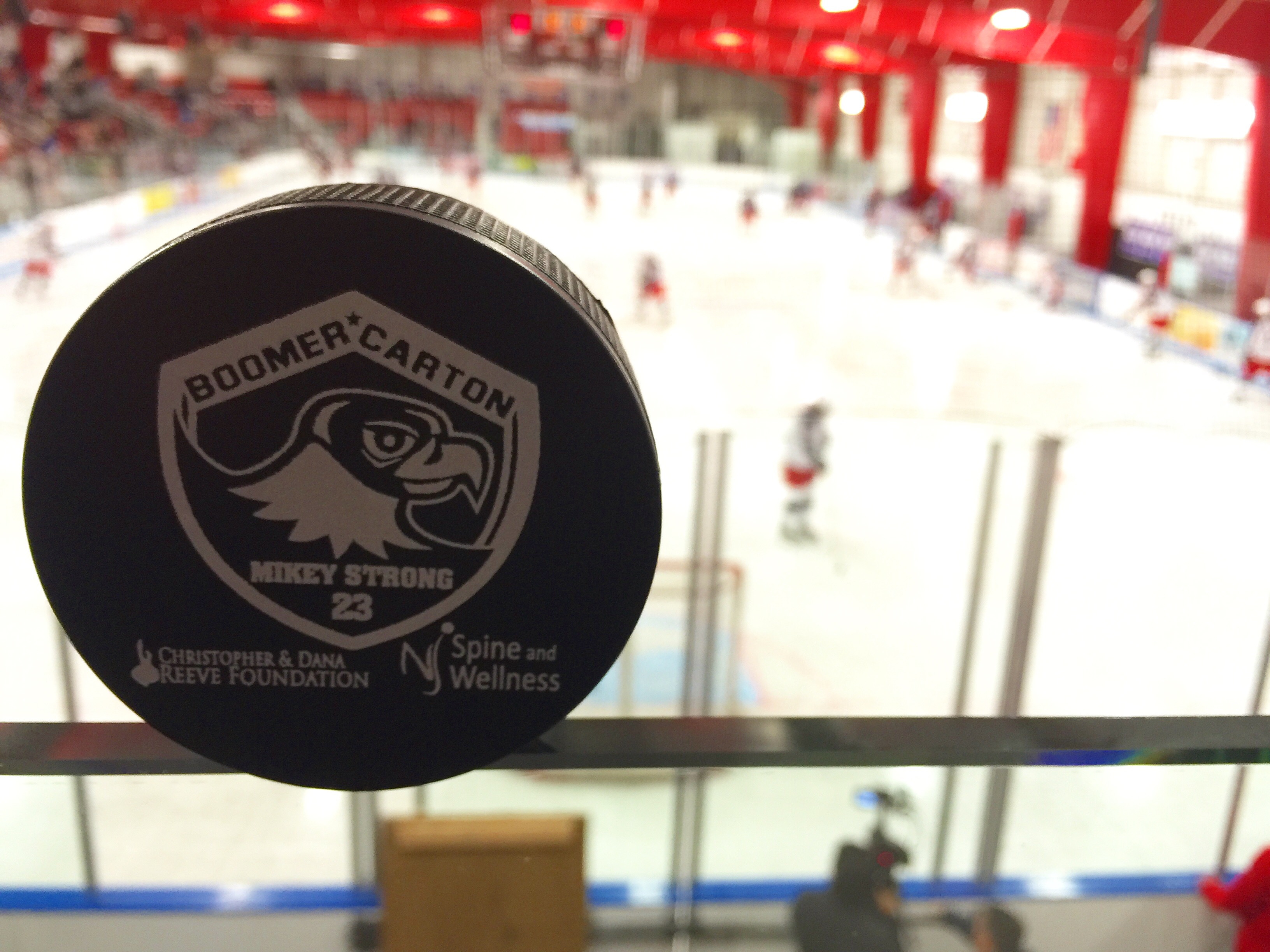 Boomer and Carton Sell Out for Mikey Strong and Reeve Foundation 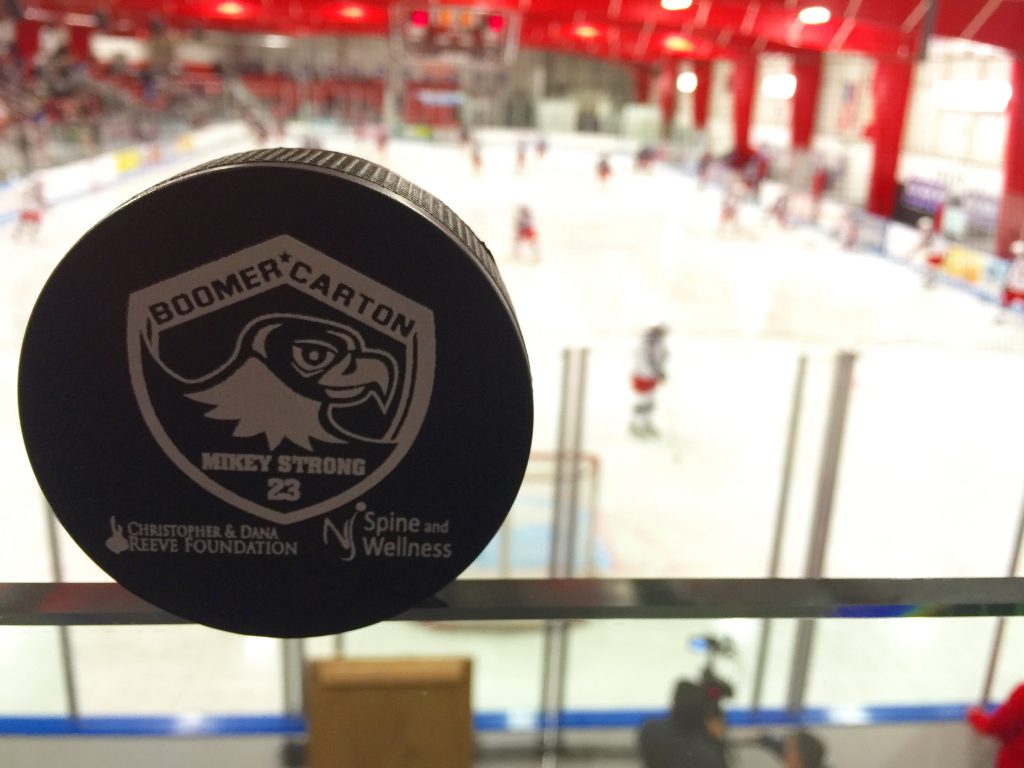 In January 2014, Mike Nichols sustained a spinal cord injury during a high school varsity hockey game. Nichols was checked from behind sending him into the boards head first, which fractured his C5 vertebra.

Nichols’ life has gone from a teenage athlete to being restricted in a motorized wheel chair.

After five and a half weeks in the hospital, Nichols pushed on with rehab and participated in the Christopher & Dana Reeve Foundation’s NeuroRecovery Network with locomotor training. Since joining, Nichols has seen improvement in his trunk control and health. 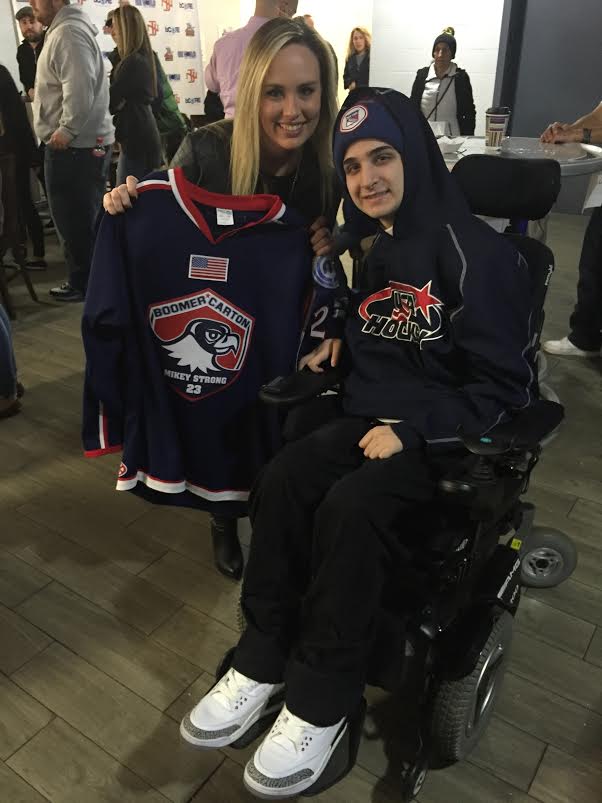 Now, two years later Nichols has learned to adjust to his new life style. He is relearning how to do all of the simple things that we take for granted. He hopes to build enough arm strength to be able to transfer himself and move his own body to gain back his independence.

When speaking with Nichols, he said the amount of support he has received and continues to receives from Boomer and Carton, along with their fans is absolutely amazing.

“Growing up, going to hockey, my dad and I would listen to Boomer and Carton and we would debate everything they said,” Nichols said.

“The best part was that after my accident, they reached out to me and made an impact for me on social media and it’s truly amazing because it shows their true character and I couldn’t thank them enough,” Nichols’ said.

The awareness that has been spread throughout the community has been a major part of the positive attitude that stands behind Nichols and his family. Two years in a row, the 1, 800 seat arena has been sold out. Last year, they raised over$60,000 and they are hoping to surpass that number this year.

“First and foremost, I have to say thank you,” Nichols said as he spoke of his community.

“Their support hasn’t wavered at all, I never would have imagined to have all of this support from people who I have never even met before,” he said. To add to his on going support it’s not only local, it’s everywhere. Nichols’ said the hockey community, The New York Rangers, and The New Jersey Devils along with all of the hockey family has been amazing.

“This was something negative in my life but because of it, I’ve met so many great people. I’ve been in the Rangers locker room, the Devils locker room I’ve even seen the Stanley Cup, but I’ve never touched it, don’t worry!”

Nichols’ has also met many athletes and celebrities, along with his favorite artist, J. Cole who was excited to meet him. 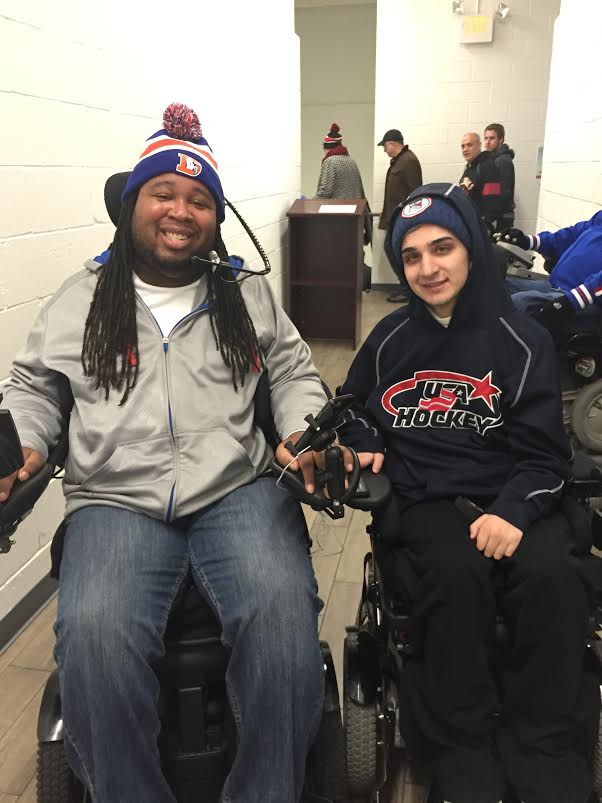 “So many doors have been opened that wouldn’t be open if I didn’t get hurt. I’m blessed to have the opportunities that have been given to me, I plan to roll with them and go as far as possible,” he said.

New Jersey native, Eric LeGrand was in attendance Saturday night. LeGrand who was paralyzed during the Rutgers vs Army game in October 2010, fracturing his C3 -C4 vertebrae was there to support Mikey.

“I’m a Rutgers fan, so knowing Eric’s story before it happened to me, he’s my role model,” Nichols said.

LeGrand and Nichols’ have become close friends and an inspiration to each other. They have attended many events together to raise awareness of their challenges and to help others who are in similar situations.

“Mikey is like my little brother, seeing that he got hurt at such a young age and the way he’s been able to handle this whole thing, is truly amazing and inspiring,” LeGrand said. “I hope he keeps his spirits up like this because he’s helping other people.”

LeGrand has been by Mikey’s side since he heard of the tragic news. “He always says that in his time spent in the hospital, he doesn’t remember anything except for me being there, and that’s really cool.” LeGrand said.

The game roster included alumni from the New York Rangers, New York Islanders, and the New Jersey Devils along with the son of Christopher Reeve, Will Reeve, and of course, team captains Boomer Esiason and Craig Carton.

It was an entertaining game for the fans as Team Boomer and former Islanders goalie, Rick DiPietro, scored a goal. All fans in attendance received a voucher for 2 tickets to an up coming Yankees game and a commemorative foam puck, sponsored by NJ Spine and Wellness. Team Boomer won 7-3.

Mikey is currently a student at Middlesex County College, and his next goal is to finish there and transfer to a University. Keep fighting Mikey, we are all #MikeyStrong.