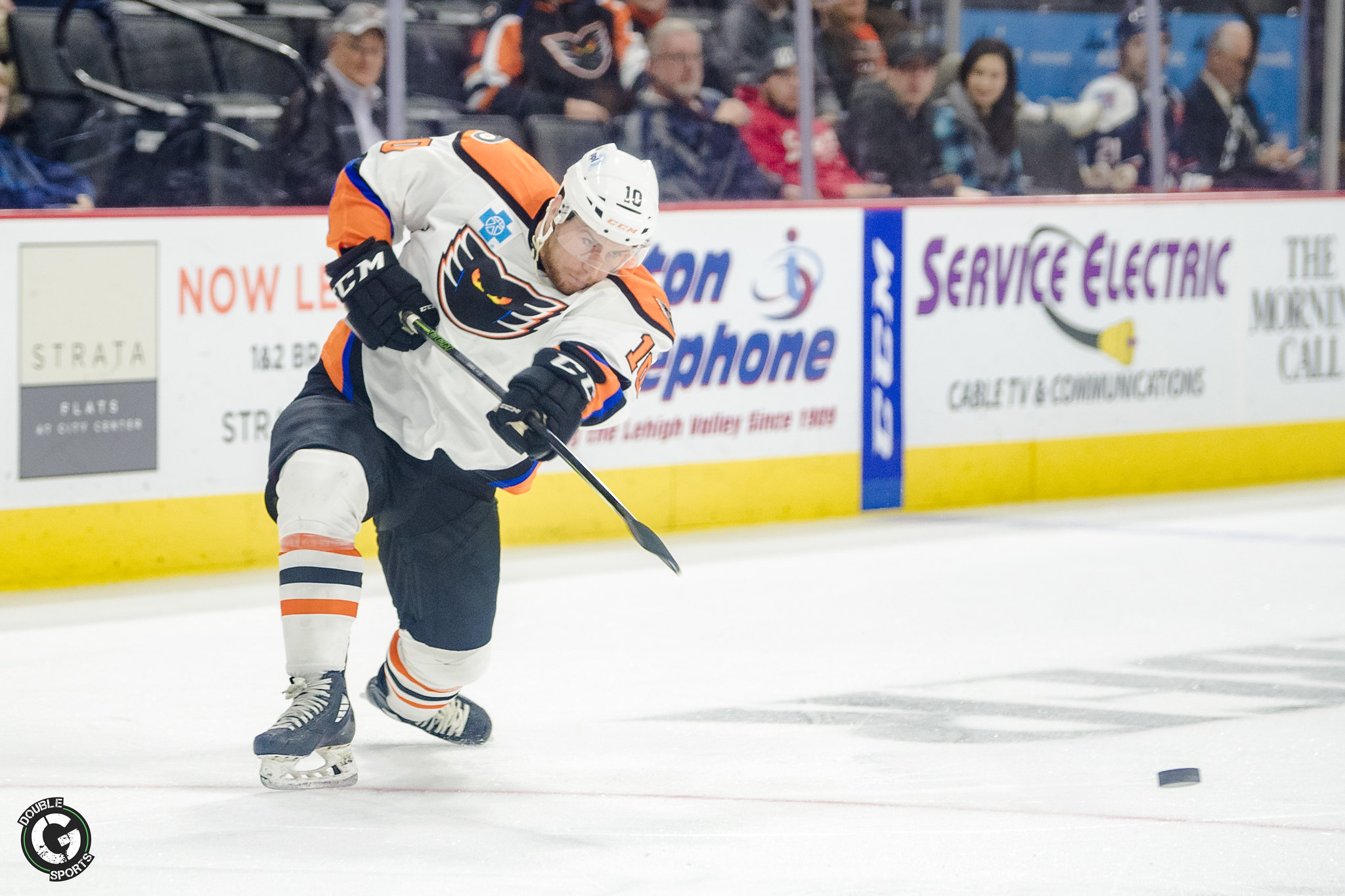 Allentown, Pa. – The Lehigh Valley Phantoms started off the 2019-2020 season in front of a sold-out home crowd on Saturday night in Lehigh Valley with a 3-0 loss against the Providence Bruins.

Despite this loss, this season is looking promising for the Phantoms, with lots of young talent making their transition from junior hockey to the AHL. Most notably, Morgan Frost, Isaac Ratcliffe and Matthew Strome made their season debuts with the Philadelphia Flyers farm team in tonight’s game.

J.F. Berube got the start in net as the Phantoms looked to start their season off with a win. The first period began with LV dominating on every surface off the ice. Both teams had a few key shots on goal, but the first goal wouldn’t come until fourteen minutes into the first period. Bruins forward Anders Bjork recorded the first goal of the game to put the yellow and black up 1-0.

Frost attempted even up the score on a nifty between the legs shot but couldn’t get the puck past goaltender Max Lagace. The Phantoms went on a powerplay shortly after and looked strong, but Lagace remained a brick wall.

There was major action towards the end of the first period with the Phantoms putting quite a few shots on net, but nothing was able to get through and the home team went into first intermission down one goal.

LV started out the second period looking a bit more scrambled than they did the first period, turning over the puck quite a few times and missing key chances on a powerplay in the beginning of the period.

The Phantoms went on a penalty kill late in the second and stood strong against the Bruins top powerplay unit. Providence had no shots on goal the entire two minutes due to LV’s solid defense in front of the net.

Things got a bit chippy towards the end of the second, with LV’s German Rubtsov and Providence’s Alex Petrovic picking up roughing minors. Just a few seconds into four on four action, Nic Aube-Kubel and Brendan Gaunce were both sent to the box for holding the stick penalties.

It was obvious just a few minutes into the third that the Phantoms were still missing the heart and speed that they had in the first period of play. The Bruins were forcing turnover after turnover and outpacing their rival all over the ice.

The Phantoms went on a powerplay halfway through the third period due to a tripping penalty, but the team only got one shot on goal. Morgan Frost, who couldn’t buy a goal despite great chances with the Philadelphia Flyers in the preseason, again couldn’t find the back of the net as the puck rang off the post. Shots came after the powerplay ended though. LV created a panic in front of the net, forcing Lagace to make a diving save to prevent a tie game.

Providence secured a two goal lead off a powerplay goal by Gaunce. The Phantoms picked up an extra roughing penalty, giving them a disadvantage that the rival capitalized on with a rocket that flew right underneath Berube’s arm into the back of the net.

Just two minutes later, the third and final goal was scored for Providence as Paul Carey put a puck behind Berube off a nice cross-ice pass from Brandon Studnicka. That goal would end up putting the nail in the coffin as the Bruins managed to shut out the Phantoms with a final score of 3-0.

“There’s a pretty big turnover from last year’s team,” said Frost. “I think the chemistry will come. We have a really talented group and I think it will all come together.”

“The first two periods I think we controlled the play pretty well,” said defenseman and co-captain Nate Prosser, “but we also have to clean up on turnovers and make hard plays. So now it’s back to the drawing board this week and get back after it next weekend.”

The Phantoms will be back home at the PPL Center to face their Pennsylvania rivals, the Wilkes-Barre/Scranton Penguins, on October 11 at 7:05 pm.

Not the Outcome They Wanted, but the New Jersey Devils Will Be Very Fun to Watch This Season
Local Hockey Power Rankings- Week 1