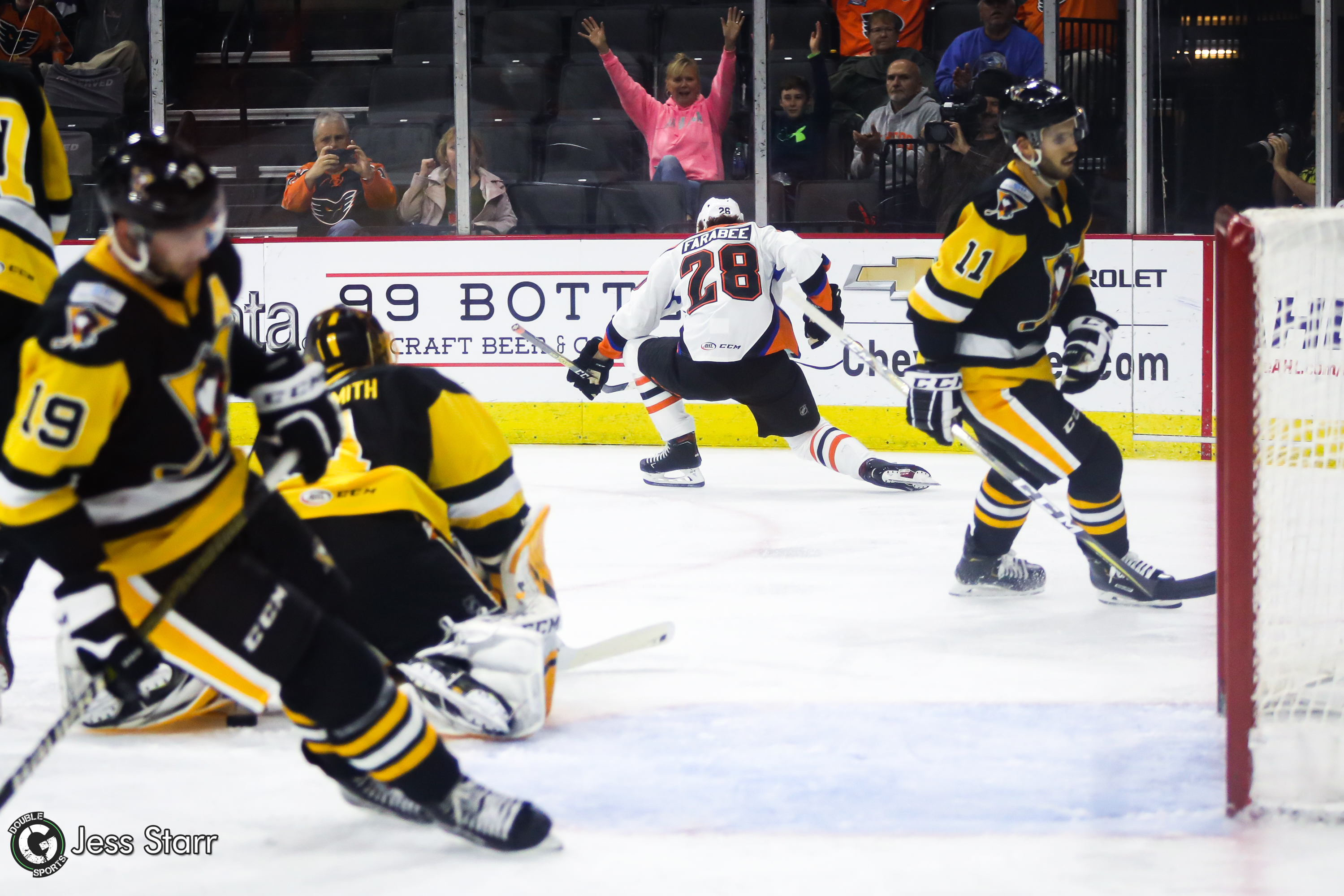 Allentown, Pa. – The Lehigh Valley Phantoms were back in action Friday night against the Wilkes-Barre/Scranton Penguins. This game was the first Pennsylvania rivalry game of the season between the two teams, with the Phantoms pulling off a 4-1 win.

19-year-old Joel Farabee made his AHL debut tonight after an outstanding training camp in Philadelphia. The forward, who was drafted 14th overall by the Flyers in 2018, spent a year at Boston University where he recorded 36 points in 37 games played. He also played for Team USA at the 2019 World Juniors, where he tallied five points in seven games played.

Farabee showed off his talents at Flyers training camp, earning him a tryout on the top line with Claude Giroux and Sean Couturier. Farabee didn’t record any preseason points, but the Flyers clearly saw enough potential that they took him overseas with the team for the Global Series in Prague, Czech Republic. Farabee was sent down before the opening game of the season, but due to the team being overseas, didn’t start with the Phantoms until Friday night.

“When I got cut I was pretty upset but since I stepped foot here I was ready to play hockey,” said Farabee. “At the end of the day, I’m here to play hockey and that’s what I want to do so just getting that opportunity here has been good.”

Alex Lyon also made his season debut for Lehigh Valley on Friday night. The 26-year-old goaltender is playing in his fourth season with the club. Due to goaltending injuries over the past two years, Lyon has bounced between the Phantoms and the Flyers. Friday night’s game against the Penguins is the 114th game that he has played in, making him the all-time leader in games played for Lehigh Valley.

Additionally, Philippe Myers made his return back to Lehigh Valley. The defenseman spent 21 games with the Flyers toward the end of last season, where he established himself as a key part of the defense. Unfortunately, Myers did not have the training camp he wanted this season, forcing Philadelphia to send him down to their AHL affiliate for the time being.

“I thought, you know, this year is going to be my year and it’s disappointing but I’m just trying to come here with the right attitude and just play my game,” said Myers. “My focus is with the Phantoms right now so I’m just going to put all my energy into here and now and just try to get better.”

The first period started out high-paced with lots of shots on goal for the Phantoms. Andy Andreoff chipped away at a handful of shots in front of the net early in the period but Penguins goaltender Casey DeSmith refused to let the puck through and German Rubtsov completely missed the puck on a wide open net just a few plays later.

The first goal of the game came at the 19 minute mark when Isaac Ratcliffe entered the Penguins zone and made a great spin move to shake his defender. Ratcliffe sent the puck over to Kurtis Gabriel who shot a rocket into the back of the net, putting Lehigh Valley up 1-0. The assist on the goal marks Ratcliffe’s first professional hockey point.

The Phantoms recorded their second goal less than a minute later. Mikhail Vorobyev put the puck past DeSmith, recording his first powerplay goal of the season. Cal O’Reilly and Rubtsov recorded assists on the goal.

Lehigh Valley managed to hold the Penguins to just two shots on goal in the entire first period.

If you thought the first period was entertaining, the second was even better. WBS started the period off on a powerplay and they capitalized on it. Just 38 seconds into the period Stefan Noesen got the puck past Alex Lyon to bring the score back within one.

Farabee, who was quiet in the first period, recorded his first professional hockey goal in an absolutely filthy way. Just over six minutes into the period, Myers sent a stretch pass up the ice towards Farabee, who then shook off the lone defender by sliding the puck between his legs. Farabee deked, forcing DeSmith out of the net, and slid the puck right behind him to put the Phantoms up 3-1.

Less than a minute later, Chris Bigras took a slapshot that DeSmith bobbled, allowing the puck to fall into the back of the net, giving the Phantoms a 4-1 lead. Mark Friedman and Rubtsov each recorded assists on the goal.

Alex Lyon played an incredibly solid game. The goaltender only gave up one goal on 19 shots. Lyon made some key saves, including some at point-blank range. Some of his most noteworthy saves came in the third period, when the Penguins seemed to wake up a bit and put a handful of shots on goal.

German Rubtsov recorded two assists in Friday night’s game. The forward had some key shots and great plays in throughout all three periods of play.

“He’s a real versatile player,” said Phantoms head coach Scott Gordon. “He plays the right way and there’s no cheating in his game. Lots of good things from him tonight.”

The forward line of Isaac Ratcliffe-Kurtis Gabriel-Mikhail Vorobyev looked to be the Phantom’s best line tonight. They were considered the fourth line pairing for the game, but played more like a top line. Gabriel had some key shots as well as the very first goal that was assisted by Ratcliffe.

The Phantoms are back on the ice tonight at home against their arch-rival, the Hershey Bears, tonight at 7:05 pm.