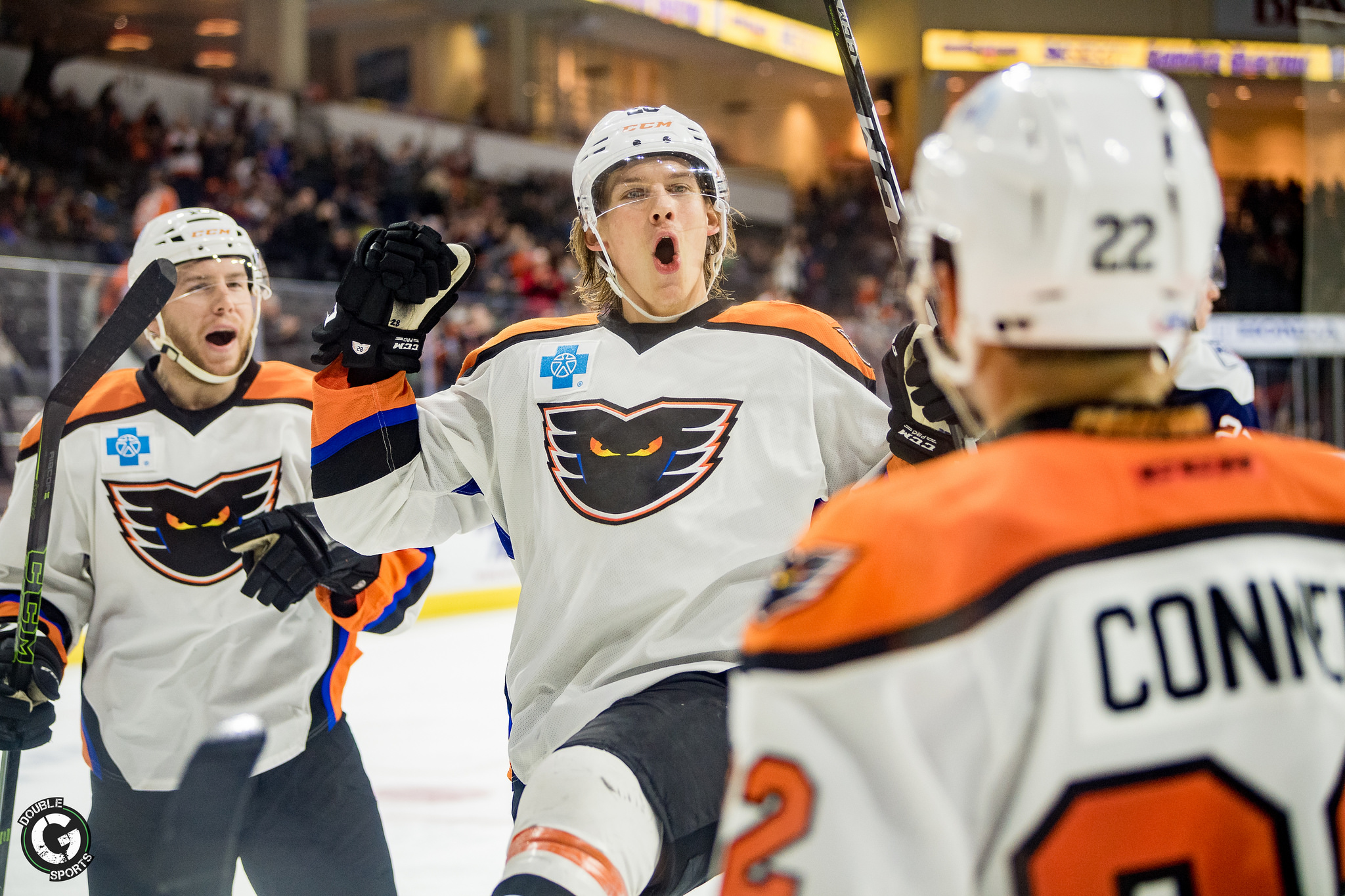 With the Philadelphia Flyers eliminated and their season over, the focus shifts to the pipeline.

Here, we’ll take a look at the top 10 prospects as the National Hockey League Draft approaches. Younger players with higher upside get a “boost” over older guys, even though you might see the older ones making an impact sooner (Vorobyov, for example).

Lehigh Valley Phantoms are fresh off a 104 point regular season (their highest total since 1999).

Two Flyers picks were nominated for the Hobey Baker award, given to the best player in NCAA hockey. Wade Allison was on his way to being a potential finalist before an injury ended his season.

We could see two more first round picks enter the fray in a couple of weeks, pending a Hex-bomb.

Its been a good year for a top ranked prospect lineup, and it was difficult to truly give defined ranks to most of them.

One of the two Hobey Baker award nominees from the Flyers, Laczynski placed 11th in points in NCAA hockey with 1.14 points per game. He hasn’t lit the world on fire with only 17 goals, but he has great vision and is continuing to grow as a player.

He’s leaning towards staying in college after discussions with Hextall, so he won’t be signing his entry level deal quite yet. Laczynski is a solid passer and had a goal and two points in a gold medal World Junior run for the United States. However, not a guy with huge upside. A good bit of potential for a sixth round pick, so Hextall would do well to have him under contract rather than letting him walk in the future.

The experts all had him going in the first round, so of course he fell to #35 for Philadelphia. The 6’6” forward possesses a high end shot with a quick release.

He scored in his two-game appearance in Lehigh Valley this year, and added 41 goals for the Guelph Storm at about a point per game pace.

Ratcliffe has middle-6 potential on the wing, but isn’t really on anyone’s radar to make the NHL for 2018. I think if he takes a big step forward this year, Hextall won’t have to hand out a big contract to Wayne Simmonds.

Its been a less than stellar season for the QMJHL Memorial Cup representative in the club. Not all of it is his fault – a move to North America from Russia to smaller ice, a language barrier, a trade between junior teams – it’s a lot to adjust to for a young center.

All that aside, he was a first round pick for a reason. The puck possession is strong. His QMJHL coach Yanick Jean says “he’s one of the three best players in the league”. However, Rubtsov is smelling more and more like trade bait to a lot of fans. He’s being out-produced by younger talent in the organization, so his clock is ticking.

Matthew comes from a family of talent. Both his brothers were top five picks in their drafts. You may have seen a highlight of his from the OHL: a lacrosse style tuck from behind the net. Not much else needs to be said about his hands, and he has good size at 6’3”, 200 pounds.

Before anyone says “but his skating!”, it’s getting consistently better. He’s not floundering on the ice like a giraffe. Professional coaching will fix it. He carries a good, accurate shot. What if he overtakes his highly esteemed brother, Dylan?

You may be looking at Philadelphia’s 4th line center for the 2018-19 season. The 21 year old had a good year bringing the Phantoms to the conference final, and is one of two guys (Vecchione the other) looking to make the jump to the NHL center position.

He hasn’t scored many goals, but he led all WJC players in assists last year for a 0-10–10 scoring line. Not a ton of upside here, but certainly a guy ready to make a professional impact, either in the bottom-6 or as a Phantoms leader.

Talk about a season to forget. It just seemed like every time he got back up, a new injury would knock him down again. He couldn’t catch a break, and he’s the last of the high draft pick defensemen to see regular NHL time. To be fair, he was close – until an injury surfaced.

Due to waiver eligibility, expect to see Morin wearing orange this season. He and a certain undrafted RHD will be battling for a spot. Morin absolutely towers over opponents, and his presence on the penalty kill would be greatly appreciated. He’s got the tools, but he needs to put this season behind and look to a bright future. One bad year doesn’t make him “injury prone”.

Here is the Flyers’ best wing prospect, period. Allison began his NCAA career with 29 points in 36 games. He eclipsed that total this year before being injured – in 14 fewer games. He was likely robbed of being a Hobey Baker finalist, if not a winner.

Allison will likely wait another year before he sees NHL time, but keep a close eye on his rebound. Expect big things from a guy who absolutely knows how to score.

The Schenn trade was NOT for Jori Lehtera, and we need to make that clear. The real return is here, embodied in a 112 point OHL season complete with 20 game point streak and 42 goals. Travis Konecny, a similarly sized player, scored at a lower clip. While junior scoring isn’t everything (see: Scott Laughton) it’s always good to see someone ready for tougher competition.

Frost increased his point total by about 40 each OHL season. While a bold prediction would be to say he’d score 150, we’ll probably see similar dominance in his draft +2 year. Unless of course, he surprises everyone and makes the big club. Frost is too young for the AHL, making this a huge summer for him.

Can’t go wrong taking a flyer on an undrafted free agent. Myers is a 6’5”, right handed defenseman with offensive talent. A late bloomer, to say the least, who’s got himself quite a highlight reel. After slipping through the cracks and falling in our lucky laps, Myers secured a top pair role on Canada’s 2017 WJC team.

His right handedness is a luxury in today’s NHL, and he’s a player to watch this training camp. He’s got a legitimate shot at the roster and anything less is a disappointment. He’s NHL ready, a truly blue-chip prospect.

Before I reveal number one, a real mystery, here are some honorable mentions and guys who just missed the cut in no particular order:

and finally, your top prospect,

Named the best goalie prospect in juniors since Carey Price, the Flyers’ future quite literally rides on his shoulders. A potential franchise goaltender, for an organization with an apparent plague for the position. This is where goalie careers come to die. All the pieces will be coming together, and it all depends on if Everett’s Number One Hockey Boy can be everything we need him to.

Hart is taking it all step by step, cool as a cucumber as always. He knows exactly what he’s expected to do, but at the end of the day, he just stops the puck in front of him.

He smashes his competition’s numbers, easily winning his typical goaltender of the year award. In fact, nobody else in the history of goaltending has done it three times – except Carter Hart.

Nobody else in the pipeline has the expectations of moving mountains alone. We just have to hope the “curse” in the crease is breakable, and if Hart can’t do it, who will?

Philadelphia Flyers Post Cup Thoughts
Is this the most important week in Islanders history?
Posting....