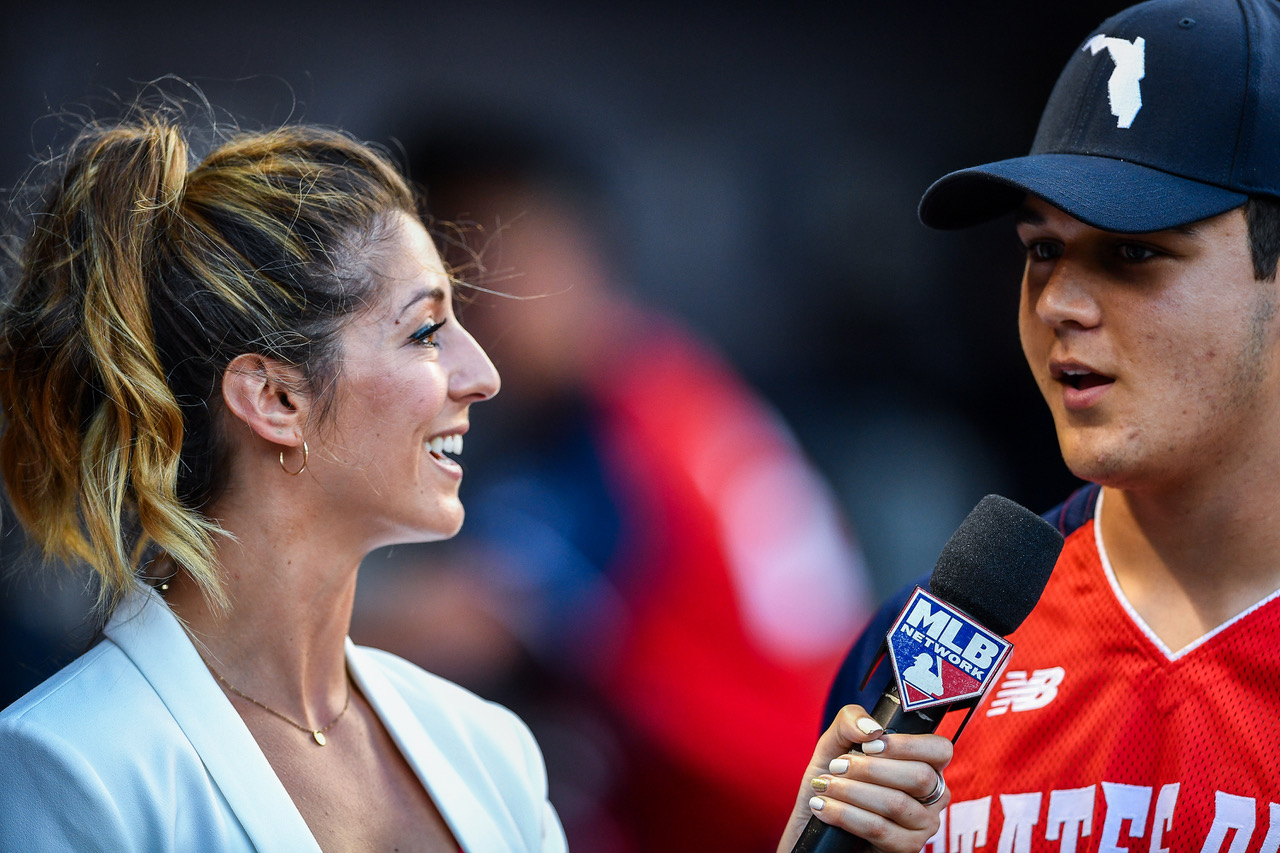 Dani Wexelman is a co-host on the “Datt’s What She Said with Dani” podcast with MLB Network’s Alexa Datt.

For the Double G Sports Women in Sports Interview Series, I had the honor of speaking with sports reporter, Dani Wexelman. Dani hails from Missouri and is a die-hard St. Louis Cardinals fan. She turned her lifelong passion for sports into a career by working for MLB Network, co-hosting the “Datt’s What She Said with Dani” podcast with MLB Network’s Alexa Datt, as well as hosting on SiriusXM.

Dani is also a sideline reporter for the National Lacrosse League’s NY Riptide and Major League Rugby, and previously worked for NHL.com.

Luke Porco: When you grew up in Missouri, was your childhood influenced by sports? Did you play? Was your family into sports?

Dani Wexelman: Yeah! I started playing softball when I was 8, 9 years old. My dad got me into that. He’s probably the reason that I love sports…he taught me that you don’t have to cry after every strikeout and kind of helped build my passion for why I love sports so much and why I continue to work in them and try to be the best reporter that I can be.

LP: Did you grow up a Cardinals fan? Did that make you want to primarily cover baseball over other sports?

DW: When you’re born [in Missouri], you are a Cardinals fan! You don’t have a choice, you’re a Cardinals fan for life. I feel really lucky growing up in a city that is so passionate and interested in the hometown team. We’ve been spoiled, obviously, with Cardinals teams and the championships that they won. So, yeah, I think that growing up in a baseball town, in a crazed baseball city, influenced my love for the game and my appreciation for the game too. [Baseball] is a lot more than just 27 outs…you have to pay your dues for real. Independent, working the way up through the minor leagues, some guys who never make it, and then they do. It’s amazing! They give you something to root for and I think that’s why I love telling stories. Everyone wants something to root for.

LP: How was the transition from St. Louis, where the whole city is behind one team in each sport to New York where there are at least two teams each?

DW: I get a lot of trouble because I haven’t really hopped on the bandwagon, I would say. I’m still loud and proud about where I’m from. I’m very, very proud to be from Missouri, I will tell you. I feel like I grew up the right way and the reason I am who I am is because I’m from Missouri.

I will say I guess I have adopted the Mets as my New York baseball team. I think there’s enough [Yankees fans] and the Mets needed a couple new ones. I picked up the Mets and I like Citi Field a lot. I would say the Mets, and I’m a big Islanders fan as well, so I adopted a couple teams when I moved here. I’m still true-blue Cardinals/Blues fan till the very end.

LP: Were there any women in the sports media industry that took you under their wing? Did they do anything that helped shape your career?

DW: I am not who I am without [Islanders TV host] Shannon Hogan and Alexa Datt. They are my phone-a-friend, they are my lifeline when it comes to navigating this Wild West that is my career. I’m sure that I have called them one too many times and they probably are like “Figure it out for yourself” but they’ve never said that to me. They are so gracious with their time and “Thank you” is never enough for what they’ve done for me and my career. They’re not only mentors, they’re friends, best friends of mine…big sisters to me. I DO NOT know what I’d do without them…beyond grateful for what they’ve taught me. All the intricacies of working as a woman in sports, they’ve helped me navigate every one of them.

LP: Did you meet your co-host Alexa Datt through MLB? When did you both decide to start the podcast?

DW: I did [meet Alexa through MLB]. We were lucky, I joined her show “12:25 Live” at MLB.com and I think probably week one, we realized that we got along and…we just bonded very quickly. It was really easy and we both play different roles and play them really well. We play to each other’s strengths.

So, when the show ended, Alexa has always had her podcast, Datt’s What She Said. We had just been looking for a reason to get back together. To work with anyone that you look up to is a dream come true, so she texted me this past winter and said “Hey, I want you to join my podcast”, and my jaw dropped. It was absolutely a dream come true to not only have my mentor, but my friend, think that I am good enough and worthy enough to be on her podcast that is successful already and to grow and do something really cool with her. Now we have a chance to be two women talking sports on a podcast. I’m really lucky.

When we are producing the podcast out before we record it…just watching how she goes about her business, how she asks questions, how she follows up, I’m taking that all in. I am a sponge, always. Even when we are doing something that isn’t work-related, I’m just always trying to take it in. When she compliments me…that is a huge pat on my back because I’ve learned all these things from the women that I’ve watched and how I try to find my own voice, but just gel with her. We’re always trying to just gel with each other and build that chemistry. Honestly, the feedback from people has been amazing. They seem to love it because we just have a vibe and it works really well.

LP: If you could have any player on the podcast, past or present, who would it be?

DW: Past, I would say Stan Musial. I have a photo of my dad at spring training with Stan on my phone. Just the legacy that he’s left behind. I would’ve loved to talk to him, would’ve loved to ask about meeting my dad at spring training. Just how he went about his business and took care of the game. He gave the game so much, so I would love to talk to him. Present, maybe Yasiel Puig? He’d be a great guest, right? I think Puig would be a huge get. I would take that any day!

LP: While you did have podcast experience, did you have experience in radio prior to working on SiriusXM? Or did you try it based on your experience with MLB?

DW: No radio experience. I got lucky because I work for a company called Perfect Game. They cover amateur baseball. They asked me to fill in…and Sirius liked me so Sirius asked me to join the team. I went to the College World Series for them and hosted pregame shows. Radio is a lot harder than you think. I am not always a ‘Chatty Cathy’, and radio forces you to push yourself and think harder and work a lot harder to come up with good questions, but have context and be able to jive back and forth with the person you’re having that conversation with, because it’s not an interview, it’s a conversation. You can kind of comment in between people, you don’t have to wait till they’re finished. You can sometimes have your opinion, which is nice. I didn’t have any experience and they threw me in the fire, and I was grateful for it.

You have also worked for NHL.com, as well. What do you like about each sport that you can’t get from the other?

DW: I appreciate a clean, three-hour, nine-inning game in baseball. I truly do. I will sit from start to finish and love every moment of it. Slow, fast, however the game paces out. As long as there is action. I want to see action in the game. In baseball, you appreciate the nuances of the game and appreciate the strategy that goes into it and the chess match that ends up being played. I appreciate that in baseball.

In hockey, you are along for a WILD ride. The ups and downs come quicker. There’s a ton of strategy and you are, as a fan, trying to keep up. I enjoy that. I also enjoy when they get in fights, and take the gloves off! That is a unique part of the sport that I don’t want to see in baseball in the least bit, but, in hockey when you want to rejuvenate your team, you know that, “Maybe I need to throw a punch. Maybe I need to give my guys something to fuel up for.”

DW: I cannot wait to pay it forward. Very, very excited to have that opportunity one day. I’ve had some people reach out, which is really kind because I’m still trying to work my way up. For them to think that I’m anybody worth talking to is super humbling. Advice that I would give to them is to be confident in who you are and what you bring to the table and know that it is enough. I always tell people that someone else’s success is not your failure.