Flynn, Sessions Are on the Knicks Radar

It’s strange how Jonny Flynn and Ramon Sessions were actually teammates that couldn’t coexist two years ago, and now they are the top candidates for the Knicks backup guard position.

It has recently reported that the Knicks are interested in Minnesota Timberwolves point guard, Jonny Flynn.  He has in recent rumors about leaving the T’Wolves, due to the arrival of young Spanish sensation, Ricky Rubio.  Ever since Rubio had agreed to sign this year, Flynn’s agent talked to Wolves GM David Kahn about leaving the team.

The Knicks had recently been searching for a backup point guard.  The Knicks already have in Toney Douglas, but he still needs to develop more in distributing the ball.  Anthony carter had played some solid basketball for us this year, but he has put a lot of miles on the NBA hardwood.  The Knicks seem to look for a different young point guard.  They seek one that has potential to be a great starter in the future. 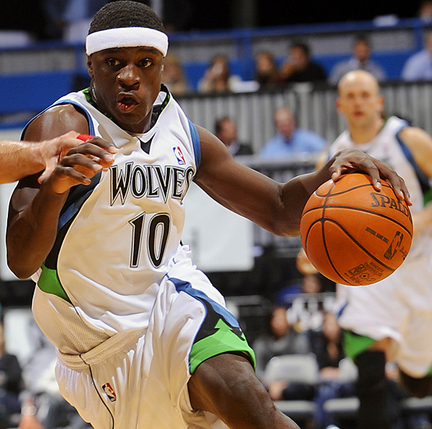 I don’t consider Flynn a great playmaker like Jason Kidd, Steve Nash or even Rajon Rondo.  However, Jonny is one of the fastest players in the league.  This skill helps him to easily spot out guys in the fast break.  I guess New York likes him because he is one of those guys that will fit into the Mike D’Antoni offense in no time.

Jonny Flynn has shown a lot of promise during his rookie year.  He averaged 13.5 points and 4.4 assists.  He has a good instinct of performing the dribble penetration down the key and takes the layup over big men.  He received the All-Rookie 2nd Team honors during the 2009-10 season.   Unfortunately, he suffered a hip injury during the end of his rookie year, and was out until December of last season.  He’s had a rough season after Luke Ridnour received more playing time during his injury woes.

If the Knicks acquire Jonny Flynn for less, consider New York being one step closer to being a stronger team in the years ahead.  He may not be the ideal candidate for a starting point guard in a playoff team now, but he has enough time to develop his playmaking abilities.  He already has great athleticism, and jumps high for a guy that’s barely six foot tall.

A more qualified player for the Knicks backup guard would be Ramon Sessions of the Cleveland Cavaliers.  In my opinion, getting Ramon Sessions would be déjà vu for New York.  Back in the summer of 1996, the Knicks signed Chris Childs from New Jersey.  He averaged about 13 points and 7 assists for the Nets, his best scoring season.  Childs was a very lethal 3 point shooter NJ, and had some clutch moments as a backup for Charlie Ward in New York.  Ramon Sessions has also had breakout season in scoring.  Ironically, Sessions averaged 13.3 points to go along with 5.2 assists.  Although that it may not seem like a high assist average for a starter, take note that Baron Davis was traded mid season.  Ramon is also young, only 25 years old.  It appears that Ramon is a very loyal player, and wouldn’t mind playing backup in the near future.

There is a good chance that Ramon would be the odd man out in Cleveland.  The Cavaliers are expected to draft Kyrie Irivng of Duke University, the 1st overall pick.  Baron Davis has captured the attention of Cleveland fans; he has always been one of the more popular personalities in the league today.  This leaves Sessions to a possible 3rd string point guard, which is unacceptable to his track record.

McCarville Speaks Out About Suspension
Liberty Hope For Anniversary Celebration