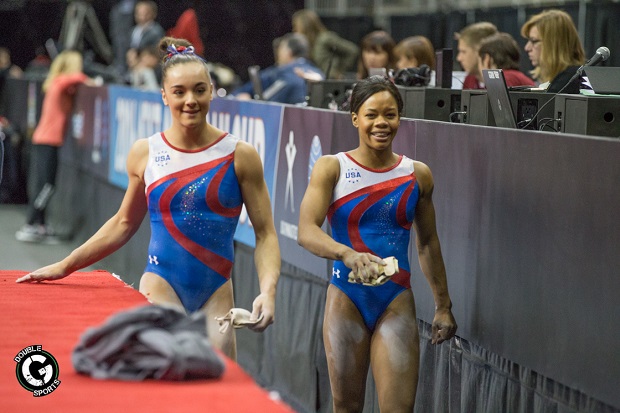 Gabby Douglas’ road to Rio ran through the Prudential Center on Saturday, for the AT&T American Cup. The American Cup, a FIG World Cup event, has a history of foreshadowing that year’s Olympic all-around champion, with past champions including Mary Lou Retton (1984), Carly Patterson (2004) and Nastia Liukin (2008). Even Douglas put up the highest score at the 2012 American Cup, although competing as an alternate her result was unofficial.

Gabby totaled 60.165 points, just .466 over teammate Maggie Nichols in the competition. This is the same event that, four years ago, put her on the path to earn the Olympic all- around gold. Douglas deserves to be commended for making it to the 2016 American Cup. While many previous Olympic champions have to decided to retire and cash out. Gabby, clearly has her sights set on a second U.S Olympic team. Maggie Nichols is coming off a year in which she won bronze in the floor exercise at the 2015 world championships. It’s time to take notice of the 18- year- old with a very good shot of making the Olympics. Nichols successfully debuted a new floor routine on Saturday and recorded the highest score of the competition. Both plan to introduce new difficult moves into their routines as the season progresses. For Douglas, that includes an upgrade on the uneven bars.

Gabby is hoping to be on the Women’s Gymnastic Olympic Team again, but to do that, she’ll have to beat Simone Biles at the P&G Championships and Olympic trials this summer.

On the men’s side, Donnell Whittenburg, the 2015 U.S. all- around silver medalist, was a stubble away from the title. The 21 year old from Baltimore won four events- floor,still rings, vaults and parallel bars, but fall off on his final rotation on the high bar. Japan’s Ryohei Kato took the title with 88.931 points, edging Whittenburg by 0.366 points. Sun Wei of China was third. Three time U.S. all- around champion and 2012 Olympian Sam Mikulak, finished fourth with 85.964 points. Mikulak is making a comeback from a partially torn achilles. Mikulak struggled in the early rotations but showed some promise later on, especially in the parallel bars.