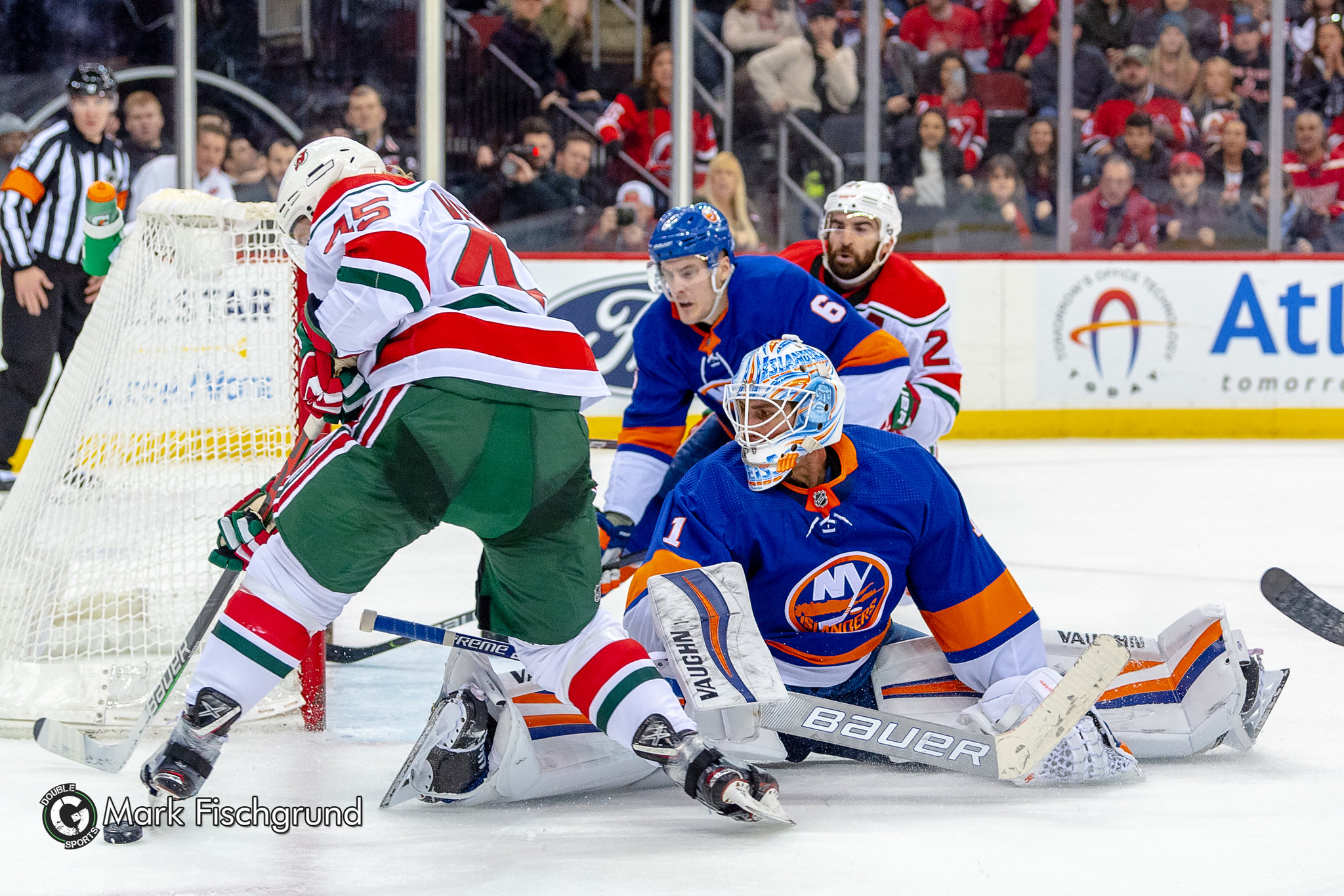 Halfway there, halfway to go: Devils take on Islanders at the Prudential Center to kickoff the second half of the 2019-2020 NHL season

It’s no surprise the Islanders are second in the Metropolitan division. They swept the Pittsburgh Penguins in the first round of the Stanley Cup playoffs last season and although they lost round two, getting swept in return by the Carolina Hurricanes, everyone in New York could tell they had something special. Let me tell you, they still got it.

It has been so surprising to see the Devils fall quickly to last place in the Metropolitan and stay there through the midway point this season. The Devils last season didn’t have the same fate as the Islanders, but moves were made and they added key pieces in the off-season that seemingly spelled success. Let me tell you, they have played some good hockey here and there, but the success everyone imagined coming this year has not arrived.

On retro night at the Rock, the Devils adorned in their retro sweaters (white at home, red across the top from shoulder to shoulder, green pants, white socks) were looking to go back on a point streak and obtain 2. The Islanders came in buzzing on the second half of a back to back after blanking the Colorado Avalanche 1-0 on Monday night. I couldn’t help but think about the flurry of tweets I saw prior to and during the game about the “retro jersey curse”. Let’s just say the curse is still alive. The Devils secured one of possible two points from this divisional match up, but they didn’t go down easily.

The Islanders scored quickly, just 3:38 into the first to give Casey Cizikas his 9th on the season. The Devils came back 5 minutes later to tie it up with a top-shelf, one-timer beauty from P.K. Subban. Less than two minutes later, Jordan Eberle unassisted, gave the lead back to the Isles and that’s where we stayed for the remainder of the first.

Nico Hischier tied things up at 18:24 of the second, and this goal was Sports Center top ten worthy. Hischier fended off Mathew Barzal and scored a top-shelf backhand past Thomas Greiss. This was after he skated circles around both blueliners, to cut back toward the net and bury one. If this isn’t All-Star worthy, I don’t know what is. Hischier is in the Last Men In contest through the NHL where fans can vote for the rest of the players who will head to St. Louis for the All-Star game later this month.

There’s no surprise in the fact that the Islanders had a ton of supporters present at the Rock; to the point where “Let’s go Islanders” chants sounded so fierce and booming that you could have thought you were at the Coliseum or Barclays Center. Do the home team players notice that? Once the 3rd period rolled around, starting 2-2 and ending 3-3, those chants grew louder and louder. Does it help? Does it hurt? How does it affect the guys?

“I love it,” Devils forward Blake Coleman said to me post-game. “It’s like a college atmosphere. You feed on the fans going back and forth, it gets you into a game like that. It’s no different when we play the Rangers. It makes it fun, it makes it exciting. They almost get our fans more into the game, which is fun for us. It picked up in the third, it got me fired up!”

Everyone was fired up as the game needed extra time for a decision, and it was fast – back and forth, red line to red line. With overtime 3 on 3, there’s much more space to skate and the pace goes through the roof. Islanders captain Anders Lee sealed the deal with less than a minute to go. A 3 on 1 for the Devils resulted in 2 players getting stuck back in the offensive zone providing a 3 on 1 for the Islanders where Lee sniped one past Mackenzie Blackwood.

Side note: Blackwood took a puck to the face in the second, not sure how it got past his mask, but it did, and resulted in a bloody smile with less teeth than he started the game with. He finished the contest, because that’s what hockey players do, but he will absolutely be visiting a dentist as soon as possible.

Interim coach Alain Nasreddine to the media post-game, “I really liked our work ethic for the majority of the game. I just felt we worked hard, but not necessarily smart. Our game management wasn’t at its best. We just have to be better when we have the lead. Guys worked, we just have to be a little smarter.”

Their next two chances to play smart are January 9th against the New York Rangers and January 11th vs the league-leading Washington Capitals, who already have 65 points on the season. Both match-ups will be tough, but doable with the right combination of skills, confidence, and smart play.

How do you think these Devils will stack up against their Metropolitan division opponents at the end of the week?!